John McCain is thinking about writing in Lindsey Graham: "The fact is I can't — seriously — I cannot vote for either one."

McCain: "I think I might write in Lindsey Graham. He's an old, good friend of mine and a lot of people like him." 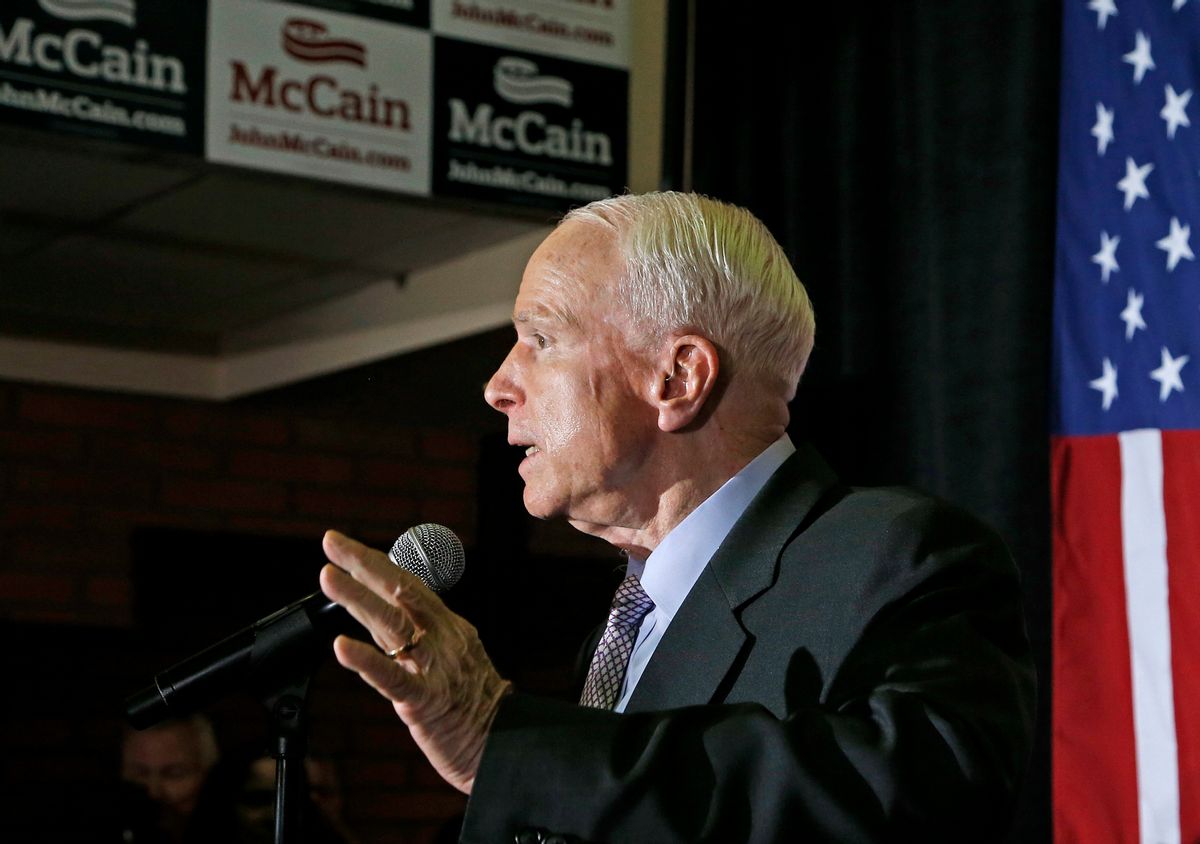 FILE - In this Aug. 30, 2016 file photo, Sen. John McCain, R-Ariz. speaks to supporters in Phoenix. Republicans don’t want to be blamed for prematurely giving up on Donald Trump, the party’s presidential nominee, for fear of alienating his supporters. But with Trump lagging in most polls and Election Day two months off, many in the GOP view the strategy as low-risk because of the deep antipathy many Republicans hold toward Clinton. (AP Photo/Ross D. Franklin, File) (AP)
--

Sen. John McCain (R-Ariz.) said Monday that he might write in Sen. Lindsey Graham (R-S.C.) for president because he's so disgusted with the Republican nominee.

McCain's renouncement of his support of Donald Trump, made during a debate for his Senate seat against Democratic challenger, Rep. Ann Kirkpatrick,  was met with questions from the moderators and Twitter users, as well as with jabs from his opponent. McCain withdrew his support for Trump Friday, only after an audio clip from 2005 was released that featured Trump making sexist remarks during a hot mic conversation.

"I think I might write in Lindsey Graham. He's an old, good friend of mine and a lot of people like him," McCain responded when asked who he was voting for. Senator Graham said that he was never "comfortable" with Trump was the Republican nominee after the 2005 audio surfaced. "The fact is I can't — seriously — I cannot vote for either one," McCain said.

Kirkpatrick criticized McCain, saying, "He's been trying to run from Trump's disparaging remarks for the last year while at the same time endorsing him over 60 times."

"I spoke out strongly on several other issues where I thought Mr. Trump was absolutely wrong. I've not been shy about it," said McCain and added his condemnation of Trump's feud with Khzir and Ghazala Khan. He continued, "When Mr. Trump attacks women and demeans the women in our nation and in our society, that is a point where I just have to part company. It's not pleasant for me to renounce the nominee of my party."

McCain used the mention of Trump to spearhead a critique of Democratic presidential nominee Hillary Clinton. McCain added that he believed Hillary Clinton's lies regarding the family of the fallen war hero, Humayun Khan, were "not unlike, frankly, Mr. Trump demeaning and degrading women."