Seeing red: China's sinking economy could pull America and the world into recession

Donald Trump said China is a threat to the U.S. economy — it's true, just not in the way he meant it. 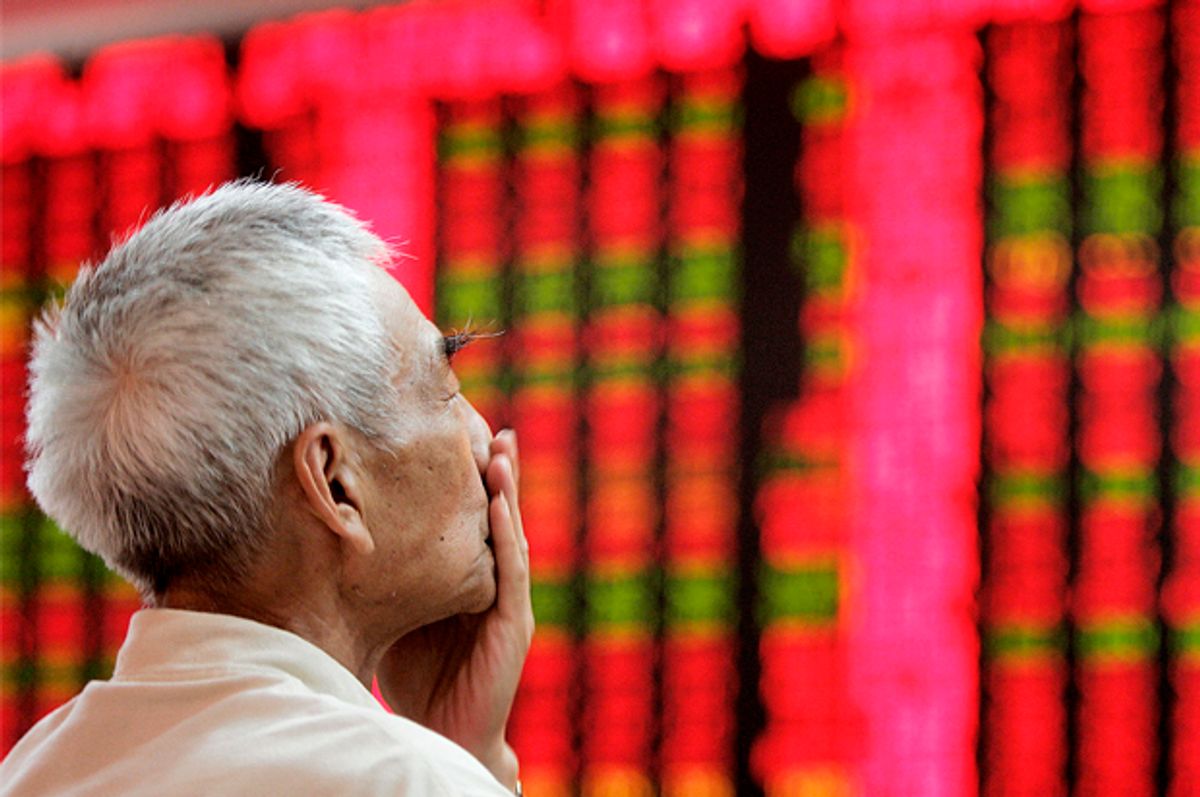 “We have no growth in this country,” he said in response to a question from an audience member about U.S. tax policy. “If China has a GDP of 7 percent, it's like a national catastrophe. We're down to 1 percent.”

On its face, this seems like a stark comparison — China growing at a rate many times that of the world’s largest economy. But Trump’s comments not only exploit a general misunderstanding about GDP growth (as a rule, emerging markets grow at a faster rate than advanced economies) they also reflect Trump's fundamental misunderstanding of — that 7 percent growth is not a sign of China's economic strength but rather its weakness.

China's economy is now growing at its slowest pace in 25 years, a decline caused partly by the country’s herculean efforts to steer away from its heavy reliance on manufacturing to a consumption-based economy with a large middle class. The country is also grappling with a massive real estate bubble — sound familiar? — that could tip it into a financial crisis, as economists have warned for years. The U.S. would not be immune to these effects, because, like it or not, Trump supporters: As China goes so too does the world.

The Organization for Economic Co-operation and Development estimates that when growth in China’s domestic demand for goods and services drops 2 percentage points, U.S. economic growth contracts by about 0.25 percentage points. That might not sound like much, but it would represent nearly a fifth of the current U.S. GDP growth rate of 1.4 percent. The global economy fares even worse when China falters, especially countries with closer trade ties to China, like Brazil, Japan, South Korea and Australia. The knock-on effect of a sudden plunge in China would rattle equity markets and hurt companies that sell goods globally, including U.S. companies.

“Everyone says China's different, the state owns everything, they can control it,” Kenneth Rogoff, Harvard economics professor and former chief economist at the International Monetary Fund told the BBC recently. “Only to a point. It's definitely a worry, a hard landing in China.”

China’s slowdown has already had a big impact on the global commodities prices, and more recently on investment banking activity in Asian financial centers. North Carolina-based Bank of America said last month it was cutting about two dozen key corporate and investment banking positions in Singapore, Japan and Hong Kong. The news came days after New York-based Goldman Sachs Group is reportedly moving to slash at least a fourth of its Asian investment banking positions outside of Japan. In July, Swiss bank UBS scaled back the number of senior managers in the region. Barclays, Societe General, Deutche Bank and Standard Charter have also made or announced similar cuts this year.

But fleeing bankers are merely a harbinger of what's to come, the tiniest of blips compared to a Chinese market crash that could drive regional economies into recessions and quite possibly drag the US economy down with it.

“China’s holding of U.S. treasury bonds has systemic implications for the U.S. bond market, and certain geographic regions and industries in the United States may be disproportionately affected by slower business activity in China,” writes Cindy Li, an analyst at the Federal Reserve Bank of San Francisco. Indeed, Louisiana, Oregon, South Carolina and Texas claim China as their largest export markets. Voters in those states should be especially worried about Trump’s proposal to start a trade war with China.

The biggest potential impact on the U.S. of a sudden China crash would be felt on the bond market. Mainland Chinese investors are the largest holder of U.S. debt (Treasury bonds) with at least $1.2 trillion as of July 2016, about 20 percent of all foreign-owned U.S. debt. A European Commission paper in 2010 estimated that China owned almost 12 percent of U.S. securities held by foreign entities, making China essentially the largest foreign investor in U.S. Treasury bonds. What China does with America’s securitized debt can have a huge impact on how much the U.S. has to spend on financing its debts, which can lead to budget cuts to public services, federal aid to U.S. states and more borrowing at higher costs.

Trump may not like U.S.-China trade ties, but his stated willingness to start a protectionist battle with a country where Apple iPhones, Buick Envision SUVs are made and exported to the U.S. seems like a nuclear option. Despite the U.S. trade imbalance with China, a big share of U.S. agricultural products goes there, and China is also one of the fastest growing export markets for U.S. companies.

And the U.S. hardly has its hands clean when it comes to trade relationships with other countries. According to the World Trade Organization, the U.S. is a leader in trade disputes brought against it by other countries, especially from the European Union, Canada, Brazil and India.

It’s likely we’ll hear more from Trump in the coming weeks about his views on China. But one thing we aren’t likely to hear from him is just how much the global economy, and the United States, needs a healthy Chinese economy.