In addition to arguing over the definition of sexual assault, the Trump campaign is also using Beyoncé as a shield 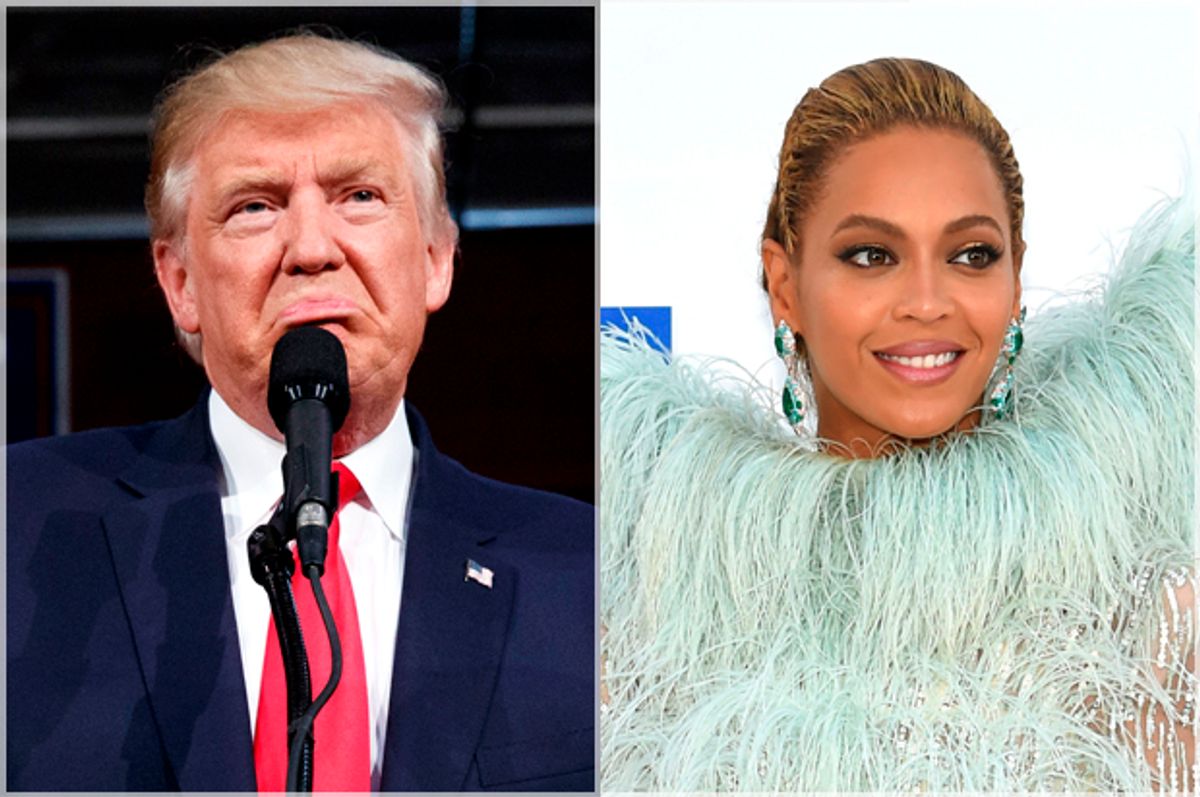 Donald Trump supporters are desperately searching for a scapegoat to deflect blame for the recently leaked 2005 audio in which the GOP presidential nominee boasts of forcing himself on women and they seemed to have bizarrely chosen Beyoncé to blame.

Hours after the hot mic moment from a taped appearance on "Access Hollywood" was released on Friday, Trump surrogate and CNN contributor Scottie Nell Hughes began crafting the blame rap music deflection. Less than 48 hours after the tape that contained statements from Trump like "grab them by the pussy" was released on Friday, an adviser to failed GOP presidential candidate turned Trump surrogate Ben Carson expanded upon the “blame it on rap music” defense.

“There are two issues," Carson adviser Armstrong Williams told Business Insider. "The tape itself, which unfortunately is the kind of language that we hear in rap music, we hear in probably coarse conversation, you know, unfortunately, we hear this.”

In his Daily Caller article, "Donald Trump Is Downstream From Beyoncé,” conservative writer Matt K. Lewis made a similar argument.

"The truth is that our culture has coarsened, and reality star Donald Trump is the political manifestation of this coarsening," wrote Lewis.

Trump surrogate Betsy McCaughey, perhaps most recently known for hyping the myth of death panels in Obamacare, went on to make the explicit connection between apparent rapper Beyoncé and Trump's offensive description of sexual assault.

"I abhor lewd and bawdy language, I don't listen to rap music because it’s full of the F-word, the P-word, the B-word, the A-word," McCaughey told CNN's Don Lemon on Monday. “But Hillary Clinton, when she expresses — ”

"Her favorite performer whom she says she idolizes and would like to imitate," McCaughey continued. "So you know what I'm saying to you? There's a lot of hypocrisy in Hillary Clinton expressing such horror at the language on the bus."

The former New York lieutenant governor then quoted from the Beyoncé hit "Formation" to prove her point.

“In fact, she likes language like this: ‘I came to slay, bitch. When he eff me good, I take his ass to Red Lobster,’” McCaughey said.

“I don’t think anyone likes that, but those people aren’t running for president,” Lemon pointed out.

"All that, and a @Beyonce reference," said @donlemon. Here's the @Betsy_McCaughey moment our host was referencing https://t.co/n1xzb7QtJZ

But facts be damned, the Trump surrogates have a ludicrous point to make and a pop star to drag into their candidate's mess so they march on undeterred. Enter top Trump surrogate Katrina Pierson

“This is something Mr. Trump said who he thought was in private,” Pierson said on CNN Tuesday morning to excuse Trump's comments, arguing that the "Apprentice" star "was part of that hip-hop culture”:

Of course, blaming Beyoncé for all of the nation's ill is nothing new for the right wing.

“When Beyoncé was thrusting her hips forward in a very suggestive manner,” Trump said of the singer's Super Bowl halftime performance this year, “if someone else would have done that it would have been a national scandal. I thought it was ridiculous," he said. "I thought it was not appropriate.”