"Should we worry about this?" John Podesta wrote. The lobbyist warned about "politicization" of the 9/11 Saudi suit 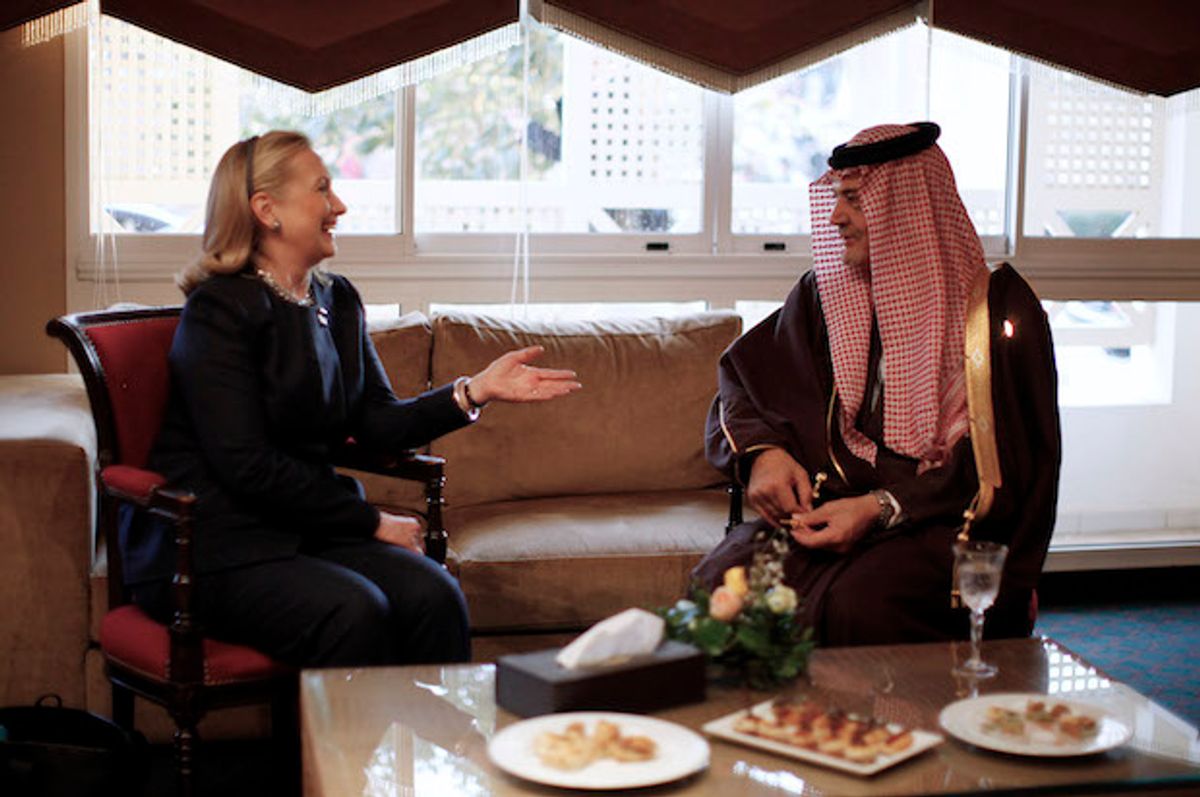 Newly leaked emails show that a lobbyist involved in a lawsuit against Saudi Arabia for its ties to the Sept. 11 attacks sent a message just before Hillary Clinton announced her presidential campaign, warning the campaign chair of the pending 9/11 case, in light of press coverage of enormous Saudi donations to the Clinton Foundation.

The lobbyist noted in an email that the 9/11 Saudi case would "draw significant and sustained media attention." The chair of the Clinton campaign subsequently expressed concern about the lawsuit, asking another Clinton ally if they should be worried. The lobbyist stressed that he did not want to see "politicization" of the case, but conceded that it was likely to happen.

On March 25, 2015, prominent lobbyist Jack Quinn sent an email to close Clinton allies John Podesta and Cheryl Mills. In the friendly message, which he titled "Litigation Against KSA," using an acronym for the Kingdom of Saudi Arabia, Quinn noted that for several years he had been representing more than one-third of the families of the victims of the Sept. 11, 2001, attack on the World Trade Center in a pending lawsuit against Saudi Arabia.

"We have been alert to press notice of Saudi donations to the Foundation," Quinn wrote, referencing the Clinton Foundation. "This, in turn, has raised the question on our legal team whether you may find it helpful to receive a briefing on the status of our discovery efforts, our responses to KSA’s motion to dismiss and our best assessment of prospects for the litigation and its final resolution."

Saudi Arabia has poured enormous amounts of money into the Clinton Foundation. The monarchy itself donated between $10 million and $25 million to the foundation, and the group Friends of Saudi Arabia, which was co-founded by a Saudi prince, gave at least $1 million more.

"We are confident the dispute will draw significant and sustained media attention over the next two years," Quinn wrote.

He added, "[We] are aware that there is very likely going to be further media attention to the role of prominent Saudis in laying the foundation for violent jihadist attacks against the West."

John Podesta, the current chair of the Clinton campaign, thanked Quinn for the warnings. In another email on March 27, Podesta replied, "I appreciate your bringing this to our attention."

"Should we worry about this?" Podesta wrote the next day in a message to Mills, a key adviser to Hillary Clinton who sits on the board of the Clinton Foundation and who served as chief of staff to Clinton when she was secretary of state. Mills replied, "i have been ignoring it -- will read it."

In a follow-up email on March 27, Quinn explained that he did not want the 9/11 Saudi case to be politicized, but feared it would likely be. "In reaching out, we had in mind that politicization of the litigation is is not in the families' interest, but we see that conceivably happening in the likely escalation of Rand Paul's charges about Saudi donations," he wrote.

Quinn was referencing comments made by the libertarian-leaning Republican Kentucky senator days before. Paul had characterized Saudi Arabia's huge contributions to the Clinton Foundation as “thinly veiled bribes.” He called on Hillary Clinton to return donations from Saudi Arabia and other U.S.-allied regimes, like Brunei and the United Arab Emirates, that refuse to grant basic rights to women.

Paul, a staunch critic of militarist U.S. foreign policy, subsequently called for Americans to boycott Saudi Arabia, in the vein of a widespread boycott against apartheid South Africa decades earlier.

It was not just Paul that Quinn was worried about, however. In an email to Podesta and Mills, he added, "We are also mindful of the increasing irritability of some of the 9/11 families, particularly ones we do not represent; this concern will be heightened if, as we suspect (and hope) our further discovery makes the case against KSA even stronger."

Quinn also indicated that he was engaged in a "separate effort to encourage a political resolution of the dispute."

These emails were released this week by the whistle-blowing journalism organization WikiLeaks. They are part of a larger trove of messages to and from John Podesta. The Clinton campaign has refused to confirm or deny the authenticity of the emails, although Clinton herself personally confirmed the authenticity of excerpts of her paid speeches to Wall Street that were included in one of the emails released. Podesta and the Clinton campaign have blamed the leak on Russia.

Quinn's correspondence with Podesta and Mills took place just three weeks before Clinton officially announced her presidential campaign. In the 18 months since the messages were sent, action against Saudi Arabia for its links to the 9/11 attacks has become a hot-button issue, as Quinn himself predicted.

In May and September 2016, the Senate and House respectively voted unanimously to pass legislation that would allow citizens to sue Saudi Arabia for its links to the 9/11 attacks.

The White House lobbied intensely against the bill, Justice Against Sponsors of Terrorism Act, known popularly as JASTA, warning it could allow other countries to file lawsuits against the U.S. government for its military actions. President Obama vetoed JASTA in September, but Congress voted almost unanimously days later to override the veto, marking the first time an Obama veto was overturned.

Quinn supported the legislation, and was featured in media reports defending it.

Jack Quinn is the chairman and co-founder of the influential public affairs firm QGA. In 2015, he was named in Washington Life Magazine's 10th annual "Power 100" list — alongside powerful figures like Hillary and Bill Clinton. The publication noted that Quinn “has enjoyed an exceptional career in Democratic politics.” He worked for Al Gore and Bill Clinton and served as White House counsel to President Clinton before becoming a lobbyist.

Washington Life Magazine described QGA as “a ‘one stop shop’ for lobbying.” Quinn created the bipartisan public affairs firm with Republican Ed Gillespie (QGA stands for Quinn Gillespie & Associates). In 2014, it was ranked in the top 10 lobbying firms, based on income, and worked for an array of powerful corporations such as 21st Century Fox, AT&T, Sony and U.S. Steel.

The Clinton Foundation is not the only Clinton-linked group with close ties to the Saudi monarchy. John Podesta's brother Tony also lobbies on behalf of Saudi Arabia. Saudi Arabia pays the top lobbying firm the Podesta Group at least $140,000 per month. The Washington Post reported that Podesta Group founder Tony Podesta, a top Democratic Party lobbyist, "is working personally on the matter."