Moms, daughters, beauty and brains: Are we short-changing our girls by pretending that appearances don't matter?

Many parents shelter their daughters from the expectations of beauty norms. Maybe it's doing more harm than good 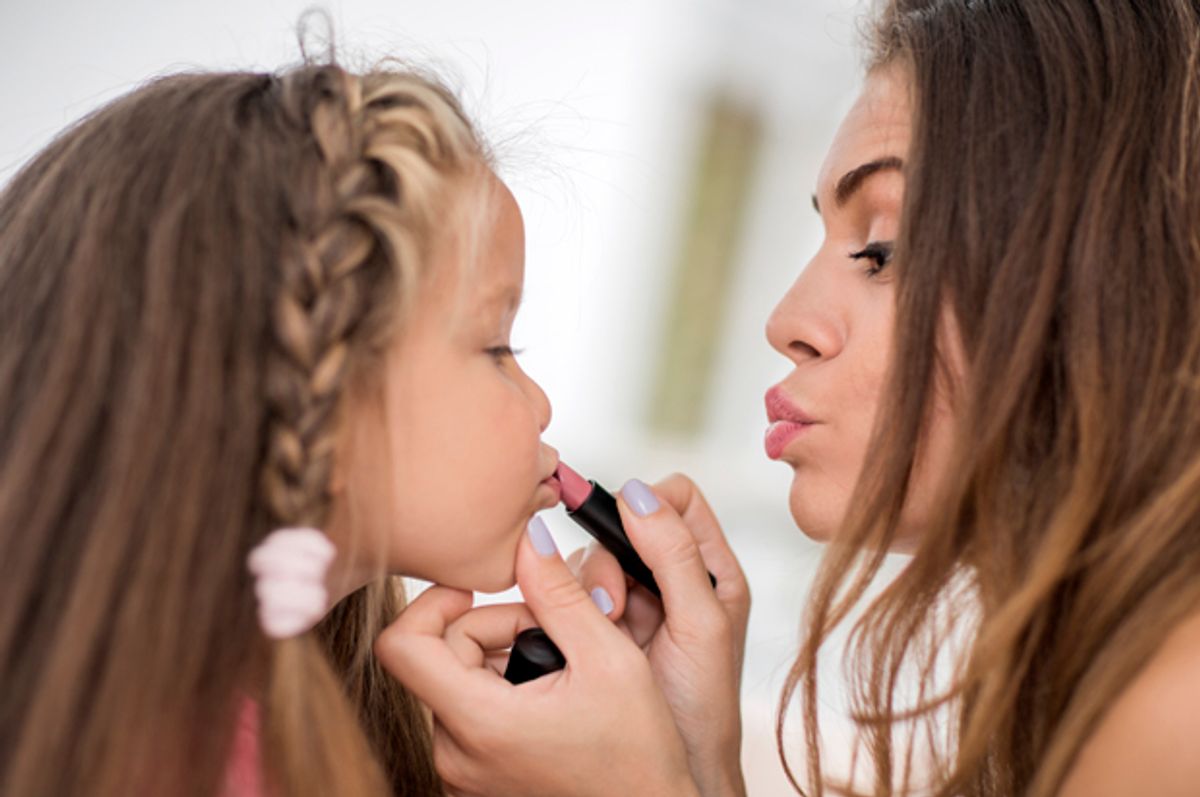 After watching the recent Presidential debates, and seeing the amount of commentary online recently about how great it is to have a woman presidential nominee as an example for our daughters (true) countered with all the back-talk about Secretary Clinton’s frumpy, monochrome pantsuits (a rainbow of mediocrity, some have opined – others have embraced Hillary’s look.) I wondered how exactly we arrived at this juncture. Nobody says anything about Mr. Trump’s wardrobe, of course. That routinized glass-ceiling sexism stuff is to be expected. But maybe what’s perceived to be lacking in Mrs. Clinton's physical appearance is not fashion — sometimes, a pantsuit is just a pantsuit — it’s the fluid sensuality of, say, Michelle Obama. In large part, it’s Clinton's stiffness, her inaccessibility that people are reacting to — things, some psychologists have argued, that we learn from our mothers.

Joyce McFadden, author of the book "Your Daughter’s Bedroom: Insights for Raising Confident Women," suggests that girls learn everything about their sexuality and sensuality (and in the process, self-esteem, life skills and confidence) from their mothers. So perhaps we can look to the late Dorothy Howell Rodham, an amazing, resilient, very tough cookie who according to reports had a horribly painful and difficult early life. Therein, we see the woman her daughter Hillary would become. We can imagine it may not have been a household with tons of discussions of feelings or delicate, but normal, private matters.

Today, Clinton is judged on a whole lot more than her political actions over the past four decades: She is not called “Chillary” for nothing. But she likely learned early in her life that men respect power and intellect, not vanity. And back in 1994, Mrs. Rodham told Chicago Magazine, "I never saw any difference in gender, as far as capabilities or aspirations were concerned. Just because [Hillary] was a girl didn't mean she should be limited."

Trump’s vulgarity and overarching, screaming anomie serves to underscore the double standard at play; his vocal criticism of women’s bodies, both Secretary Clinton’s and lately, former Miss Universe Alicia Machado’s, would make anyone bristle. While Trump is obviously dead wrong and his treatment of numerous women in his organizations is unacceptable, one of his first important hires in building Trump Tower was Barbara Res, who became Trump’s top construction engineer after he saw her work on one of his father’s projects. Res claims Trump was awful and misogynistic to other women, but not to her — until he believed she crossed him. In her 2013 book "All Alone on the 68th Floor, How One Woman Changed the Face of Construction," Res wrote, “Donald, for all his commentary and womanizing, was the least sexist boss I ever had as far as trusting me and viewing me equally with all the men we encountered in our mutual dealings…”

Trump cared about looks first, but also respected smarts and leadership in female employees. It seems Mrs. Rodham was onto something. But what if today’s young girls were taught to emphasize both qualities? What if we weren’t afraid to tell our girls they were pretty again?

Unfortunately, though we think we have come a long way, baby, Teflon Trumps abound in the world. In 2016 Barbie got a “normal body” makeover and now comes in more skin tones after 57 years of unrealistic whiteness, skinniness and weird, pointy feet, yet most girls still aspire to be thin and pretty, even if they are also smart and capable.

No matter what a mother does, it will be well before adulthood that most girls start to feel social and media pressure to conform to certain body image and vanity standards. The Internet is flooded with opinionated answers to, “how old were your daughters when they started wearing makeup?” Obviously, when you allow your daughter to wear makeup is a choice based on your own beliefs and your child, but criticism of young girls starts early, and it’s unwise to ignore that reality. In the worst scenario, low self-worth develops into extreme responses like eating disorders, body dysmorphia and depression. In these cases, lifelong struggles with food and confidence can be the price a woman pays.

What if we started talking to girls about society’s expectations earlier, balanced with a healthy perspective? Instead of the more common “post-feminist” approach of letting girls be little and not “worry” about make-up, hair, clothes, sex or body image “too soon?” What if that instead infantilizes them and ill-prepares them for the realities of adult life? McFadden, who is also a psychoanalyst, might agree. “We need to accept the responsibility of teaching our daughters about sexuality throughout their lives,” she writes. “When our girls are little, many of use sidestep the issue in ways that include such things as neglecting to teach them the correct names of their genitalia, telling ourselves they are too young to need to know. This is a discomfort that mothers have been passing on for generations…”

I went to Vassar. I read Susan Faludi, Erica Jong, Adrienne Rich, Audre Lord. My late mother was a left-leaning feminist, and as such at age 10 I was gifted copies of "Our Bodies, Ourselves" and "Changing Bodies, Changing Lives" — with all aspects of human sexuality and development on glorious (and embarrassing) display. I never had Barbie or other “girly” toys, aside from the occasional doll. I was not told or taught to shave my legs at age 10 (which I needed to do), or wear a bra (also needed) because my mother didn’t believe it was time yet. I had wild hair, played in the band, and was unpopular. I was teased mercilessly, and had to switch schools.

At age 15, a modeling agent “discovered” me in a New York Italian restaurant. I put down my pasta in a hurry and paid attention. You see, all that well-intended feminist influence had done nothing for me — a tall, awkward and oddly pretty teen — except make me want to fight my way out of a proverbial bag towards staying thin and wear designer jeans my parents couldn’t afford and wouldn’t have bought me if they could have. I was a “smart” Westinghouse Scholar, but I developed a mild eating disorder anyway, proudly weighing in at 115 lbs. in high school at 5’9".

What if my mother had been able to encourage both the societal import of aesthetics and self-worth? On her deathbed, I asked her why she never told me I was pretty. “Because I thought it was more important that you know you were smart,” she responded. “Society would obviously show you that you were pretty.” Maybe so, but I didn’t know it. It was then, when I was eight-and-a-half months pregnant with my now eight-year-old, that I decided I would have more balance with my daughter. I would tell her that she was smart and pretty. I would shepherd her in the expectations of society, so she could make healthy choices. She would not be caught on stage in a mediocre pantsuit unless she wanted to wear one.

Last week, I sent my oldest woman friend an email with a picture of a dress and sparkly (low) heeled shoes I had ordered for my daughter for a family wedding. They were, I thought, very appropriate for a young girl. The passive-aggressive response I got from my friend was both surprising and infuriating. “So...you're the mom who's [sic] eight-year-old wears high heels huh? Does she wear lip-gloss too? And eye shadow and…Well I guess you have an eight-year-old Barbie, because you never got one as a kid.”

Wow. I paused after reading. That was mean. When confronted, she said she was “mostly kidding,” because we are old friends and can rib each other, and that she was “trying to strike a nerve.”

She did. A back-and-forth ensued, where she asked if I had made my daughter feel she was not beautiful as-is (this is not even slightly the reality), and I realized that women are very polarized about how they teach their daughters about being their own people and in some cases, how to go with the flow.

I find myself at a crossroads now as mother to this soon-to-be-tween who is tall, thin, and interestingly pretty like I was. When she was three and into princesses and pink, I realized it would be a Sisyphean challenge to put her in jeans and “boy clothes” if she didn’t want to wear them. She asked to paint her nails and wear pale lip gloss. I allowed it. When it came time for annual elementary school class pictures, I found myself putting concealer on her slight dark circles, and adding a bit of blush to her porcelain cheeks. She never questioned why, since I told her she would look pretty in her photos with a bit of make up – even though no one else applied makeup to their six-year-olds. The next year, she smiled and asked for make-up. I’m not talking "Toddlers and Tiaras"-style make-up here, mind you. And she isn’t allowed to wear make-up to school, nor does she want to. I never thought I was sending my girl the wrong message, and I still don’t.

I believe there is a way to teach our girls how to beat the system: that making an effort to be both smart and pretty will help them more in life, because it’s plainly true. Some girls do not have the option of being both; still, it is hugely important to emphasize inner beauty for all girls, as I do as a coach of the national girls empowerment organization Girls on the Run.

I seldom wear make-up, and if I do, I wear very little, unless I am on camera. (Disclosure: I am a also a consultant for the skin care company Rodan and Fields, whose modus operandi is to help women feel confident going without makeup.) Because I know my daughter is learning the most from what she sees me do, I do my level best every day to be kind, help others, and model other qualities I think contribute to becoming a good human being. As a part-time fitness instructor, my kids see me being active and healthy; they know what healthy eating is, and that the number of calories going in has to match calories out in order to maintain a healthy weight. This has led to a few awkward moments in social settings where they have criticized what other children’s parents let them eat, or pointed out the sugar, fat or chemical content in said foodstuffs. Regardless, I am proud when they show they understand healthy food choices.

If we as parents remain non-judgmental about others, or relate to people based on how they are and not how they look, our children will learn what matters most. But this does not mean looks don’t matter at all. Just as schools teach hygiene, so must a mother lead in a timely way with all related matters of deodorant, leg-shaving, clothes-matching, make-up, sexuality and more, as appropriate. If this sounds 1950s to you, you’re not being realistic about how society works. We need balance for our girls.

So, while other girls are learning incorrect information on the playground next year about food, body image, makeup, hygiene, diets, relationships, boys, and more, I’m hoping my daughter has the confidence to educate them — to be a leader, and a friend. To be progressive. To be post-feminist in her own way. To be softer than Hillary, exuding warmth, kindness, beauty and intelligence. And when she grows up, to rock a (good) pantsuit, if she wants.