Do Republican leaders still think their only problem is a rogue candidate? If so, they haven't paid attention 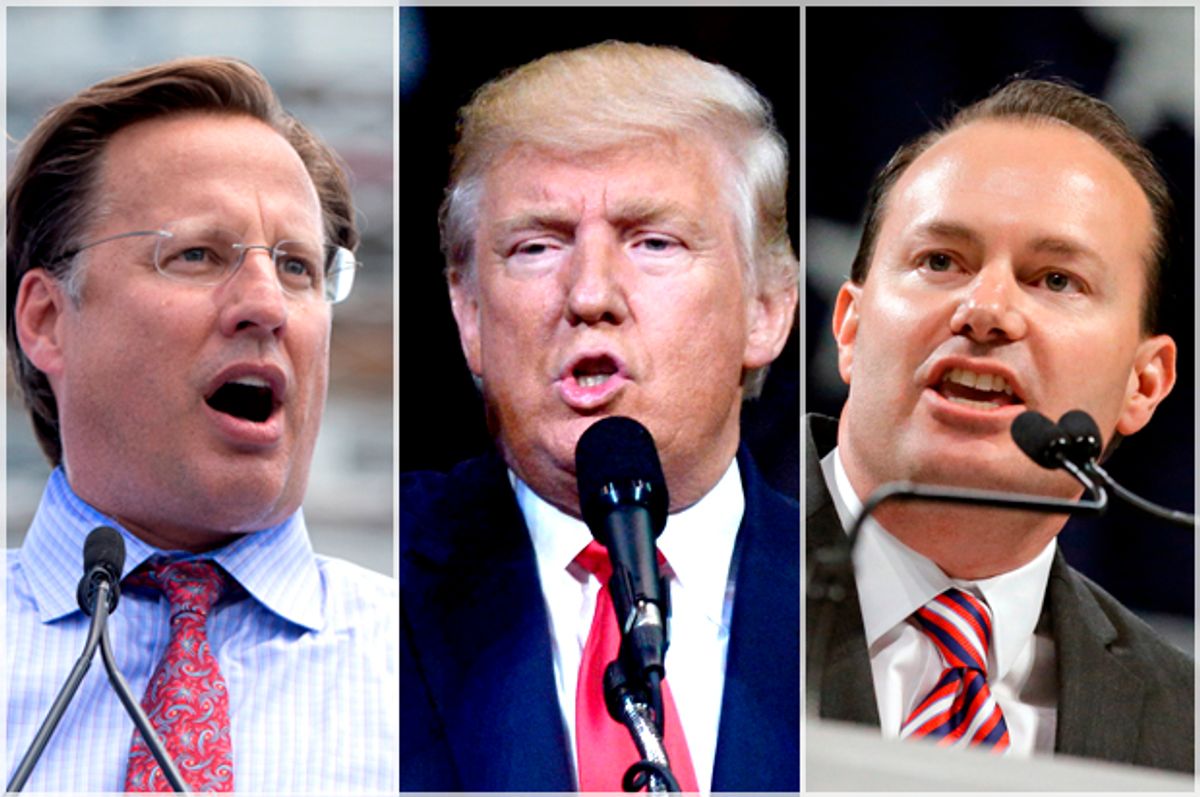 That tweet sent shock waves through the political world yesterday. Democrats understood it to mean that the next four weeks are going to be an ugly mud-wrestling contest the likes of which this country has never seen. They donned their hazmat suits and ventured into the mire. The Republicans, on the other hand, understood that Donald Trump had just declared war on their party.

In a flurry of tweets, he characterized House speaker Paul Ryan as "weak and ineffective" and claimed he provided "zero support." He then accused Sen. John McCain of being foul-mouthed and begging for his support in the past. And he said the GOP was harder to deal with than his Democratic rival declaring, “Disloyal R’s are far more difficult than Crooked Hillary. They come at you from all sides. They don’t know how to win — I will teach them!” Trump wasn't just unshackled, he had staged a prison break and was running screaming through the streets as his many millions of fans cheered him on.

All this evidently came as a surprise to the GOP establishment, which apparently assumed it could abandon all pretense of supporting its own presidential nominee with no repercussions. Apparently leading Republicans still don't understand what is happening to their party. They seem to be under the impression that their only problem is a strange interloper by the name of Donald Trump, and they couldn't be more wrong. Their problem is that they have a large and powerful faction of voters who despise them as much as they despise the Democrats.

When President Obama was elected, the Republican base of the party, demoralized and defeated after the mess of the Bush administration, the Great Recession and the euphoria of the Obama campaign, quickly gathered its wits and reformed itself into a new entity they called the Tea Party. At first it simply existed to oppose President Obama's agenda, the health care reforms in particular. Backed by big special interests and right-wing media, they became a force to reckon with and in 2010, with the economy still mired in recession and people still feeling desperate, they helped the Republicans win back a congressional majority, along the way unseating some long-term Republican incumbents like Sen. Bob Bennett of Utah and Rep. Bob Inglis of South Carolina, both taken down by primary challenges from the Tea Party right. They marched into Washington with a mandate to confront the establishment.

The new insurrectionists also wanted to blow some things up just to show they could, which led to government shutdowns and "hostage taking" and sequestration. It proved they had power to gum up the works but it didn't result in taking back the White House in 2012, even with Rep. Paul Ryan, every Republican's dreamboat, on the ticket. That defeat didn't change their strategy one bit. In fact they redoubled their efforts to turn Washington into a combat zone and whatever small amount of comity was left fell completely apart.

In 2010 and 2012, Tea Party candidates repeatedly won primaries against GOP incumbents or more qualified politicians, often leading to bad results in the general election. They tended to nominate extremists and fringe characters like Sharron Angle in Nevada and Richard Mourdock in Indiana who couldn't win. To some extent the Tea Party base didn't care whether the GOP won the seat or not. They were happy to flex their muscles against the establishment and put all officeholders on notice that if they didn't toe the line, they could be next.

Then came the earthquake of 2014, when the Tea Party and talk radio joined together to help an obscure college professor named Dave Brat take down a very powerful member of Congress. That was, of course, Rep. Eric Cantor of Virginia, the House majority leader, who had been touted just a couple of years earlier as one of the conservative Republican "young guns," the future of the party. Pundits and analysts insisted at the time that the reasons were all local in nature and had nothing to do with broader trends. They were wrong. Brat won because of one issue: immigration, which was stimulating the right in a way they hadn't seen since the early days of the Obamacare town halls. The primary defeat of Cantor showed the GOP leadership they had targets on their backs too.

A year later, fellow Young Gun Paul Ryan reluctantly took the speakership after John Boehner sacrificed himself in order to get a budget agreement that would hold through the election. Predictably, Ryan soon became an object of mistrust and disappointment. The base, you see, doesn't understand how our government works, and truly believed that if they sent representatives to Congress they could successfully roll back every liberal achievement of the past 60 years. They've been angry at the GOP for failing to do the impossible for quite some time.

This is the same base that today is supporting Donald Trump, the man who reportedly paid someone to listen to talk radio, read right-wing news sites and brief him on them regularly, going all the way back to 2011. He sensed the potency of the racism Barack Obama evoked among that crowd, which was why he based his aborted 2012 run on birtherism. He understood before anyone else that these people were fundamentally xenophobic white nationalists who were looking for someone to articulate their rage about what they saw as the loss of their rightful social status at the hands of nonwhite non-Christians. He also shared their outrage at what they see as threats to American global dominance from immigrants, Muslim extremists and Asian economic competition. Trump understood the Republican base better than the Republican Party itself did back in 2011 and he understands them better today.

Just as the congressional leadership has been caught between a rock and a hard place in the House and Senate these past few years, with the normal workings of our governmental system clashing with the angry base's demand that they unilaterally disable the executive branch, they are caught now between the moderate Republicans and independents they need to keep their congressional majority and their angry base, who love Trump and will once more rebel if those they send to Washington fail to fulfill their wishes.

This then is just the latest iteration of a dynamic that's been going on for years. Trump is simply the first opportunist to take it to the presidential level. That dynamic dictates that when he loses, leading figures of the GOP establishment will be blamed whether they stick with Trump or not, so they might as well do what they think is right. The question after all this time is whether they even remember what that is.