"Someone has said, We have had enough of the sheriff's violations of people's rights" 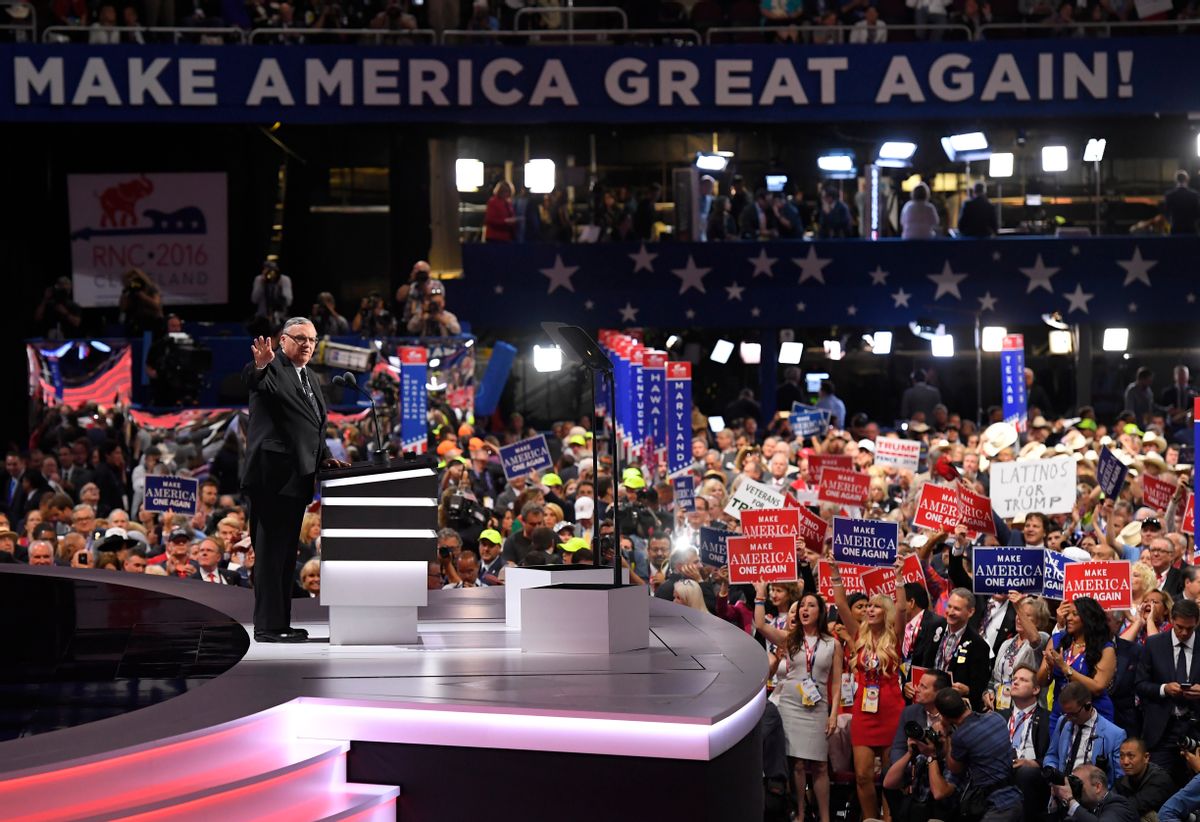 Sheriff Joe Arpaio of Arizona speaks during the final day of the Republican National Convention in Cleveland, Thursday, July 21, 2016. (AP)
--

PHOENIX — The longtime sheriff of metro Phoenix has walked away from criminal investigations in the past without facing charges and still has managed to get re-elected.

Sheriff Joe Arpaio, who became a national name by cracking down on illegal immigration and forcing inmates to wear pink underwear and live in tents in the desert heat, faced federal investigation four years ago on allegations he retaliated against two local officials and a judge at odds with him by accusing them of corruption.

His office also was investigated for misspending more than $100 million in jail funds, including on those failed investigations into rival officials and on patrols that a judge later concluded had racially profiled Latinos.

Neither investigation led to prosecution of the sheriff nor his employees, but federal authorities plan to reverse course and charge the defiant 84-year-old lawman with misdemeanor criminal contempt of court, marking a major blow on the day early voting begins in his bid for a seventh term. There was no sign that charges had been filed as of early Thursday.

Despite the investigations and unorthodox approach to his jails, the sheriff has won solid support from voters for his tough-on-crime tactics. But Arpaio now faces his toughest push yet for re-election as he finally faces criminal repercussions in the heavily Hispanic state.

Joel Robbins, a Phoenix attorney who has filed dozens of lawsuits against Arpaio over the years, said a criminal contempt charge will be a long-awaited comeuppance for a lawman who has flouted the rules and exposed taxpayers to millions of dollars in unnecessary legal costs.

"Even if it's a misdemeanor, someone has said we have had enough of the sheriff's violations of people's rights and violations of laws," Robbins said.

Chad Willems, Arpaio's campaign manager, said the U.S. Justice Department is purposefully trying to hurt the sheriff's re-election chances by charging him less than a month before Election Day.

"You don't file charges for revenge or political gain, and that's what you see from the Department of Justice," Willems said, adding that voters might initially be shocked by such a charge but will eventually conclude the case is politically motivated.

The Justice Department declined to comment on Willems' claims.

Federal prosecutors said Tuesday that they would charge Arpaio for ignoring a judge's order to stop the signature immigration patrols that helped make him a national political figure. The order was issued in a racial profiling case that Arpaio lost three years ago in which he was found to have violated the civil rights of Latinos.

The U.S. Justice Department also is conducting an obstruction-of-justice investigation into Arpaio's defiance of a court order to turn over 50 hard drives in a secret investigation that critics say aimed to discredit the judge in the racial profiling case.

Arpaio, who has already collected $12 million in campaign cash during this election cycle, emailed a fundraising plea to supporters Wednesday that focused on the upcoming charge, saying it would mark the Obama administration's "last shot at taking me down."

Mike O'Neil, a pollster in the Phoenix suburb of Tempe, said the charge would not bode well politically for the sheriff, who won his 2012 race with nearly 51 percent of the vote. Since then, the sheriff has faced a steady stream of unfavorable news from his racial profiling case, including revelations that it's expected to cost taxpayers $72 million by next summer.

"The drip-drip-drip of legal developments has hurt him," O'Neil said, but noting that Arpaio's die-hard supporters won't back away in his race against Democrat Paul Penzone.

Federal authorities also investigated complaints from officials in Maricopa County, where Arpaio polices, that his office inappropriately spent more than $100 million from two jail funds over an eight-year period to pay for different law enforcement operations.

The agency said there was no attempt to hide the spending and it was the result of an innocent accounting mistake, attributing the problem to an outdated payroll system. In the end, prosecutors said they found no evidence that shifting funds from one law enforcement purpose to another constituted a criminal violation.

From The Wires Joe Arpaio