Evil Corp. escapes again: Sure, CEO John Stumpf resigned and Wells Fargo paid $185 million — but the bank is getting off easy 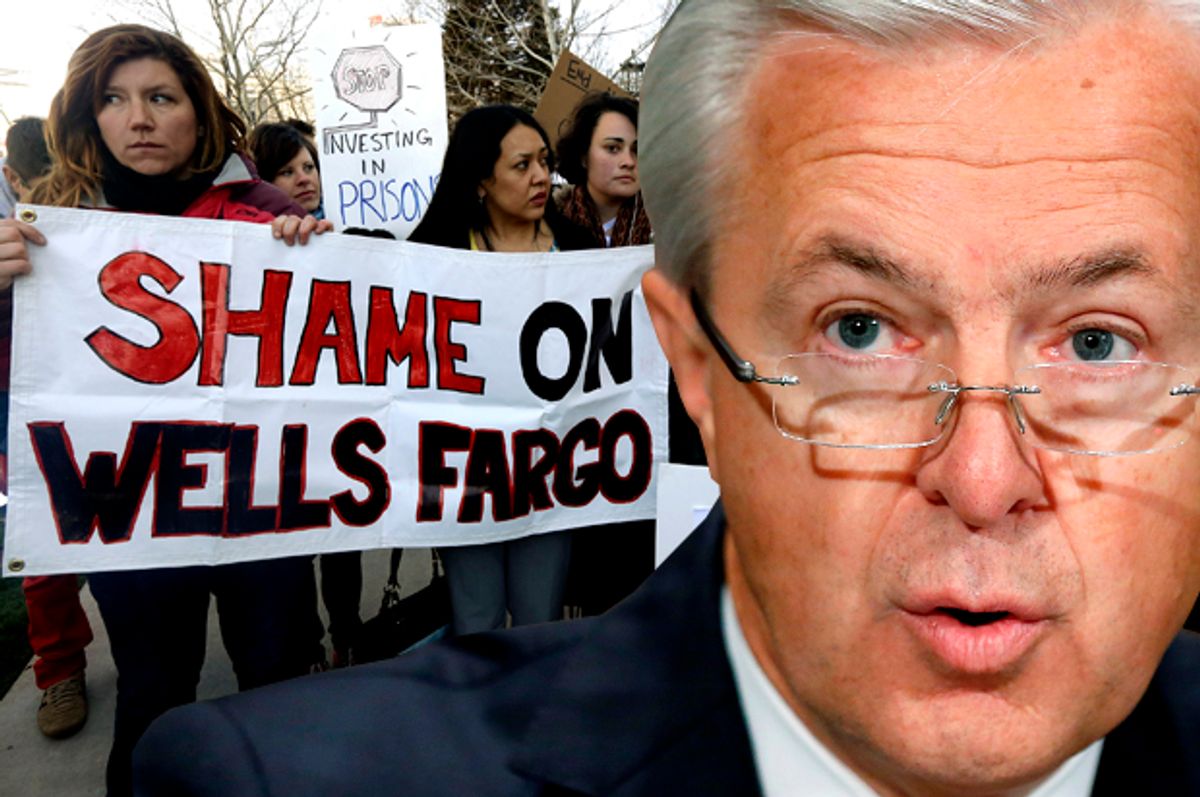 One hundred and eighty-five million dollars. That’s how much Wells Fargo agreed recently to pay the federal government for creating at least 2 million accounts in customers’ names without their permission. So while people are bound to focus on the fact that the scandal forced CEO John Stumpf to resign on Thursday, “effective immediately,” it's important to remember that the nation’s second-largest bank got a financial punishment that amounts to chump change.

Stumpf was an easy fall guy after Senator Elizabeth Warren called out his "gutless" leadership at a Senate hearing in September. "You should resign," Warren told Stumpf. "You should be criminally investigated." Now that Stumpf is out, it is tempting to think Wells Fargo has been taught a lesson by this public shaming and punishment. Don't.

But at no time did Warren or regulators hit Wells Fargo where it really matters: its balance sheet.

The $185 million penalty — paid to the Consumer Financial Protection Bureau, the Office of the Comptroller of the Currency and to the City and County of Los Angeles — amounts to less than 5 percent of the $3.72 billion Wells Fargo  raked in last year in credit and debit card fees alone. In case you were wondering, the San Francisco-based bank earned $22.89 billion in profit (on $83.62 billion in income) in 2015.

So inconsequential is this to the bank’s bottom line, the regulatory penalty could actually be considered a validation rather than deterrent of the malfeasance. It certainly represents a minor financial risk compared with the benefits of instilling a fearsome sales culture on its low-level employees. Despite buying advertisements in national newspapers last month declaring publicly that it accepts “full responsibility” for its actions, Wells Fargo has aggressively denied charges by regulators that the wrongdoing of creating these fake accounts was caused by the bank’s business model or culture.

Under Stumpf’s strategy of “cross selling,” bank employees said they faced totalitarian pressure to up sell customers numerous accounts. Many were fired for missing daily selling quotas. Others quit under the intense pressure. Thousands who were more desperate to keep their jobs resorted to opening the fake accounts and claim that managers even encouraged them to reach out to family members and friends to meet these quotas.

On Wednesday, the news site Vice presented evidence at least one bank manager had complained of the practice as far back as 2005 — well before 2011 when the sales strategy was thought to begin. Before the day was over, Wells Fargo announced Stumpf's resignation and the appointment of President and COO Tim Sloan to succeed him.

Like so many other banks caught engaging in shady behavior — from laundering drug money to sanction violations and rigging daily global interest rates — the usual procedure is for banks to pay financial penalties and walk away without any admission of guilt. If anyone is prosecuted (a rarity), it’s almost never a high-ranking executive, much less a CEO.

Members of the company’s top brass don’t seem too upset or contrite when talking among themselves. On Tuesday, The Wall Street Journal reported that Wells Fargo executives warned that while the effects of the scandal would be measurable in its retail banking arm, the financial fallout has so far been minimal. In a conference call with hundreds of the bank’s executives, Chief Financial Officer John Shrewsberry said public denouncements by states, including California, weren’t “really amounting to much in terms of dollars yet.”

The comments came ahead of the bank’s third-quarter earnings report, which is due out on Friday morning. The bank is expected to report earnings that have declined, to $1.01 a share from $1.14 a share, from the same period last year, on lower sales of $22.13 billion from $22.23 billion, according to analysts polled by FactSet.

Technically, Wells Fargo is not out of the woods yet. The bank faces lawsuits from employees who lost their jobs for not meeting cross-selling goals, U.S. Department of Justice and state inquiries and a groundswell of public outrage. But Wells Fargo is likely to walk away innocent in the eyes of the law — and now that Stumpf is out, the public is likely to feel justice has been served and move on.