Hip to be square: Is there really a feminist, secular anti-choice movement? (Spoiler: No) 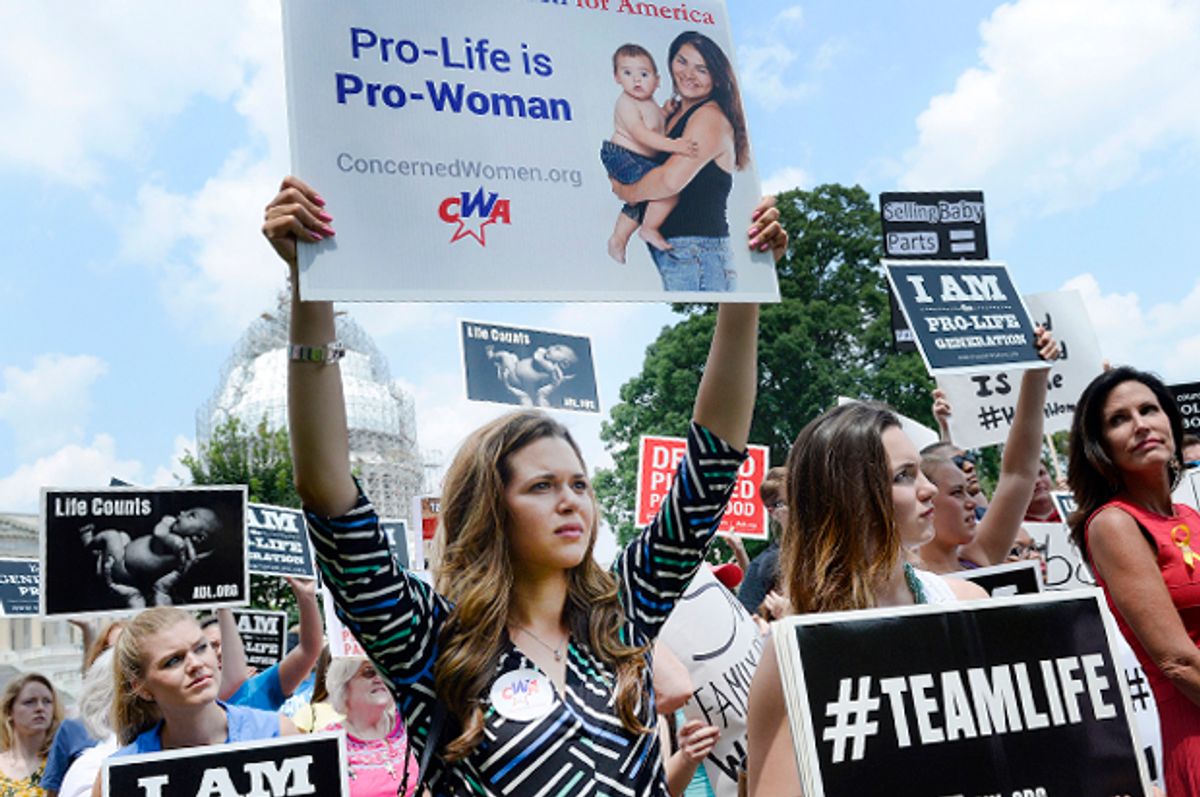 Every few years, there's some effort to portray today's religious right as hipper and younger than the Bible thumpers of old: Christian rock, evangelical ministers with spiky hair and goatees, Jesus-friendly hip-hop performed by awkward white guys rapping about side hugs.

In this grand tradition, Ruth Graham of Slate has rolled out a piece arguing that the fusty old anti-choice movement has received a makeover and is now composed of hip young people who are totally feminist. Hell, she argued that you can't even consider them the religious right anymore, because these hip young vagina police consider themselves secular.

"In conversations over the past several weeks with activists and other young people who care deeply about ending abortion, I found many who are skeptical of the movement’s long-held ties to the GOP and the Christian right," Graham wrote. "Instead, they are using the language of feminism, human rights, and the Black Lives Matter movement to make their case for a new culture of life."

Sounds exciting, right? Some of these people even have their hair dyed in fancy colors. But none of that should fool anyone: This movement is anything but secular or progressive.

Take, for instance, the "feminism" of these young anti-choicers. Graham interviewed Destiny Herndon-De La Rosa, who has clearly studied the hipster feminist aesthetic and imitates it pretty well. But when one digs past her use of Rosie the Riveter images and her willingness to curse, Herndon-De Le Rosa's rhetoric is revealed to be standard right-wing misogyny. She has called feminists "hysterical, entitled twats" who "are polishing up their victimhood, parading it around and calling it feminism."

Meanwhile, Herndon-De La Rosa is swift to invoke the language of victimization when writing about consensual sex, which she frequently portrays as an evil male plot foisted on women too stupid to know better.

"Sometime before we were born our womanhood was traded for a handful of birth control pills, the 'privilege' to degrade ourselves in playboy, and the 'right' to abort our children," her website reads.

There's nothing new about anti-choicers portraying sex as a degrading act that no woman actually wants and that women merely endure so as to gain that brass ring of marriage and a baby. No amount of borrowed graffiti-art images can conceal the inherent sexism of this view.

Herndon-De La Rosa's attempts to spin the anti-choice view as a rejection of male control and authority are particularly hard to swallow, given her own story about why she gave up contraception.

Another interviewee of Graham's — Aimee Murphy, founder of Life Matters Journal (a nonprofit "dedicated to bringing an end to aggressive violence") — has made similar arguments about men, women and sexuality.

"This is what 'bro-choice' looks like and means for the men who want to 'game the system' and use women for meaningless sexual escapades," Murphy wrote in 2013.

Abortion matters to men, she added, because "without it, they’d get stuck with 'sluts' and have to face the consequences of their actions — and maybe treat women with the respect they deserve."

The possibility that women might not want to be forced to give birth simply to punish men for sleeping around doesn't enter into Murphy's analysis.

When it came to the possibility that women might have sex for reasons outside of husband snagging, Murphy was skeptical. She sarcastically noted that women are told to not "expect to get into long, meaningful relationships — because these days really all the female is looking for is someone to sleep with (because of female empowerment, y’know)."

"You can't be against bodily rights for women and be a feminist," Beth Presswood, an activist who works with the Atheist Community of Austin, told me via email. "Feminism and secularism must take women's agency and autonomy seriously in all realms, including sexual."

I reached out to Presswood to respond to Graham's claim that since "the nonreligious population" is growing, that means the number of irreligious activists fighting reproductive rights is exploding as well.

Presswood and her husband, atheist speaker Matt Dillahunty, have a history of active debate with activists from Secular Pro-Life, including formal public discussions. They are both skeptical that more than a handful of truly secular anti-choice activists are out there.

While saying there are "many secular folks who are opposed to abortion," Dillahunty told me that he's "not convinced they have enough people to truly be a movement."

Graham, it seems, struggled to find many living, breathing examples of anti-choice activists who are genuinely non-religious.

"But many young pro-life activists, even if they are Catholic — and many are — prefer not to frame their arguments as religious," Graham wrote.

"It is true that their arguments have no direct religious content, but that doesn't mean that they are not still influenced by religion," Presswood asserted, saying there's a "stain of religious thinking" upon these supposedly secular anti-choice arguments. She noted that Pew Research has found that 87 percent of self-identified atheists are pro-choice.

In a section of her article profiling Aimee Murphy's "consistent life ethic," Graham came close to admitting this, saying that Murphy made  arguments "echoing Catholic theology."

What Graham failed to note, however, is that Murphy is Catholic. She was not "echoing" Catholic views in some sort of accidental concord. She was channeling them because she's a believer.

There is nothing new about religious people trying to concoct "secular" arguments against abortion or contraception. Since the Supreme Court made its Roe v. Wade decision, anti-choice activists have understood that they couldn't just declare that the law should reflect their religious dogma about women's bodies and sexuality, due to constitutional protections of religious freedom.

As such, the religious right has always cycled through a variety of ostensibly secular arguments, from claiming that life begins at conception to asserting that abortion should be banned to protect women's health, in order to paper over the true religious arguments that move them to oppose reproductive rights.

As Dillahunty pointed out to me, a "good chunk of [Secular Pro-Life's] blog posts are written by Christians/Catholics" and that showcases exactly how difficult it is to drum up much interest among nonreligious folks for a cause devoted to meddling with other people's sex lives. A perusal of the Secular Pro-Life blog seemed to confirm this observation, with several blog posts being written by Christians like Rebecca Stapleford and Clinton Wilcox.

Wilcox is one of two Secular Pro-Life representatives whom Dillahunty has debated. On his personal blog, Wilcox has argued, "I, myself, have met people who said they did not come to Christ until after they became pro-life" and wrote that anti-choice arguments are a good way to lure people into converting to Christianity.

Murphy took a similar view in a 2013 interview with the Catholic Millennial Journal:

Speaking as someone who came back to my Catholic faith long after I had become pro-life, I know that as a secular teen who was barely agnostic, I would have rolled my eyes at faith-based speeches and arguments for the pro-life cause. This is not to say that the religious heritage of the movement must be lost, but I really think we would do ourselves a big favor to “rebrand” the pro-life movement as one based on facts and science — a human rights issue — instead of on our faith in whatever religion or God we profess.

"We also welcome people of faith. Maybe you're a Catholic weary of having your pro-life position dismissed as 'dogma.' Maybe you're a Protestant interested in more diverse outreach," the Secular Pro-Life website declares.

In 2012, Secular Pro-Life set up a table at the American Atheists convention in Washington. Atheist activist Phil Ferguson had a table next to it. For a few hours, he watched secularist after secularist argue with the anti-choice activists and stomp away in anger. After watching this for a while, Ferguson wrote "Donate to Planned Parenthood" on a cardboard box and put it on his table, so it was right in the sight line of people talking with activists at the Secular Pro-Life table.

"Oh hell, yeah!" he recalled people as saying before they opened up their wallet to express their frustration with the anti-choice movement in the language of cold, hard cash. He ended up collecting $300 for the women's health organization.

Secular Pro-Life didn't win many converts to the anti-choice cause at that event, but it did create an opportunity to publish a whole bunch of articles in the Christian press about how this stunt totally proved the existence of secular anti-choicers.

The whole thing has a strong whiff of a Potemkin movement that's less about genuine organizing and more about creating the illusion of secular anti-abortion sentiment, an illusion necessary to hoodwink courts and the public into believing that anti-choice laws can exist without violating people's religious freedom.

To be clear, it's not impossible for a nonreligious person to be fanatically anti-abortion. Kelsey Hazzard, the head of Secular Pro-Life, is not religious, even though audiences who read her writing or attend her speeches are largely religious. But Hazzard's attitudes about women and sex read like they're straight out of some evangelical tract on the evils of the oversexed secular world.

Last year Hazzard wrote a piece for Life News titled, "Woman Gets Pregnant Just to See if She Can, Then Has an Abortion." The article is about a book published in 1988 that Hazzard seemed to believe proves that women who have abortions are careless idiots. She pulled one story out as a cautionary tale, about a woman who supposedly tested her fertility by becoming pregnant by a man she had no intention of marrying and then aborted the fetus.

"So much for all women treating abortion with the gravity and seriousness it deserves," Hazzard sneered. She went on to paint pro-choicers as adulterers or cads who don't understand the true nature of love and marriage.

The Supreme Court's June decision striking down an abortion law that the anti-choice movement spent the better part of a decade constructing is a setback that feels to many like a fatal blow to the movement. Of course anti-choicers want to believe that there's a hip new movement that has scintillating arguments that will destroy legal abortion forever. But it's just wishful thinking, and it doesn't take much scratching to find that these new anti-choicers are just the same old anti-feminist sex scolds they've always been.