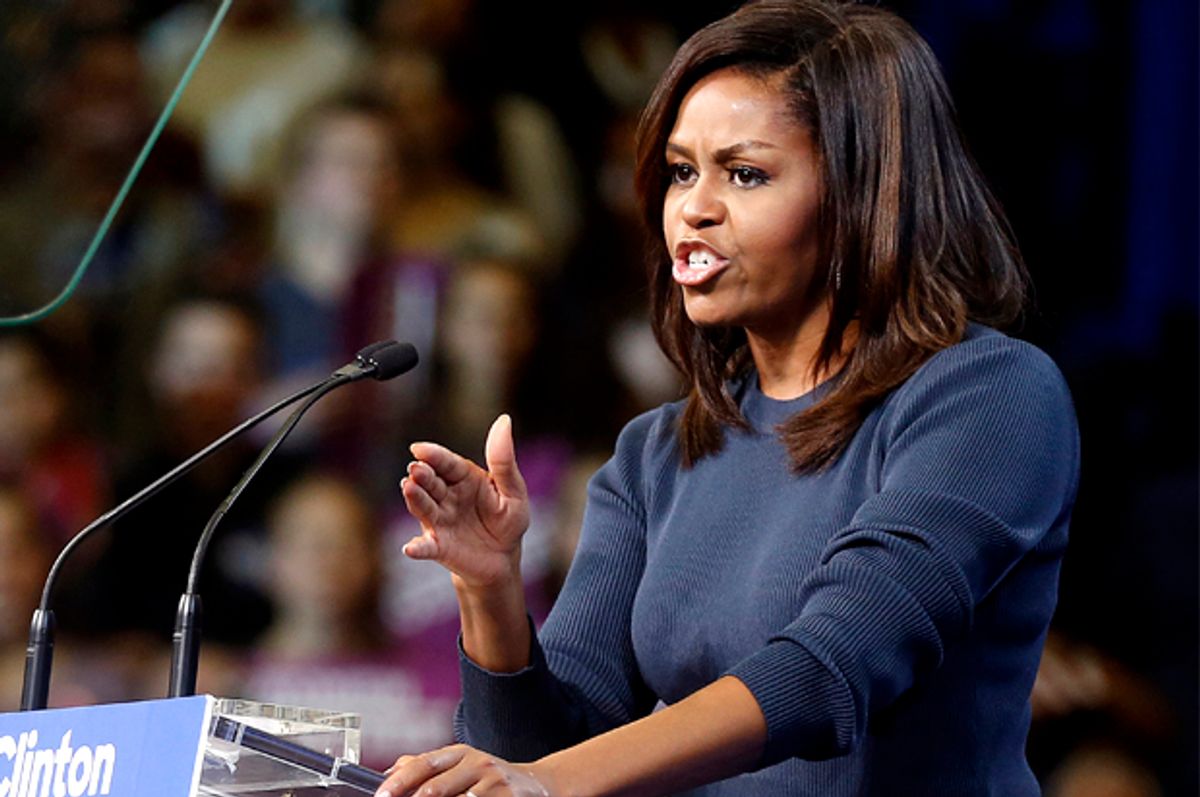 In a clearly impassioned and personal speech on behalf of Hillary Clinton, first lady Michelle Obama delivered an urgent message to all Americans the morning after multiple women went public alleging sexual assault by Donald Trump: The Republican nominee is unacceptable as president of the United States.

At a New Hampshire rally on Thursday, Michelle Obama expressed deep concern about Trump's repeated boasting of forcing himself upon women, arguing that voters must oppose the example he sets as a matter of "basic human decency."

“The fact is in this election we have a candidate for president of the United States who over the course of his lifetime and the course of this campaign has said things about women that are so shocking, so demeaning, I simply will not repeat anything here today,” Obama said at Southern New Hampshire University in Manchester.

The first lady continued, "I have to tell you that I, I can't stop thinking about this. It has shaken me to my core in a way that I couldn't have predicted.”

Revealing that she felt compelled to speak out after Trump's 2005 hot mic moment was published by The Washington Post, Obama said, "This isn't about politics. It's about basic human decency. It's about right and wrong."

She said, "It would be dishonest and disingenuous for me to move on to the next thing like this was just a bad dream."

“Describing this as ‘locker room talk’ is an insult to men everywhere,” Obama asserted. "This was a powerful individual speaking freely and openly about sexually predatory behavior."

Obama said American women "are drowning" in “this kind of violence and abuse and disrespect" —  something that many describe as rape culture.

"And all of us," she said, "are doing what women have always done, we are trying to keep our heads above water, just trying to get through this, trying to pretend that this doesn’t really bother us."

“The shameful comments about our bodies," she noted. "The disrespect of our ambitions and intellect. The belief that you can do anything you want to a woman? It’s cruel. It’s frightening. And the truth is, it hurts.”

Yet Obama continued, "We need to recover from our shock and our depression." Referring to the sordid campaign developments, she said women "need to do what women have always done in this country: we need to roll up our sleeves and get to work."

“Now is time for us to stand up and say enough is enough. What do you think this is doing to our children?” She said:

Obama asked the audience to think about the message transmitted to young people if the first female major-party nominee is defeated by a man like Trump. "If we turn away from her, if we just stand by and allow her opponent to be elected, then what are we teaching our children about the values they should hold — about the kind of the life they should lead?” she asked.