Trump fanboy theories: Jews released the Billy Bush tape, the FBI's in league with Hillary and Oprah is the devil 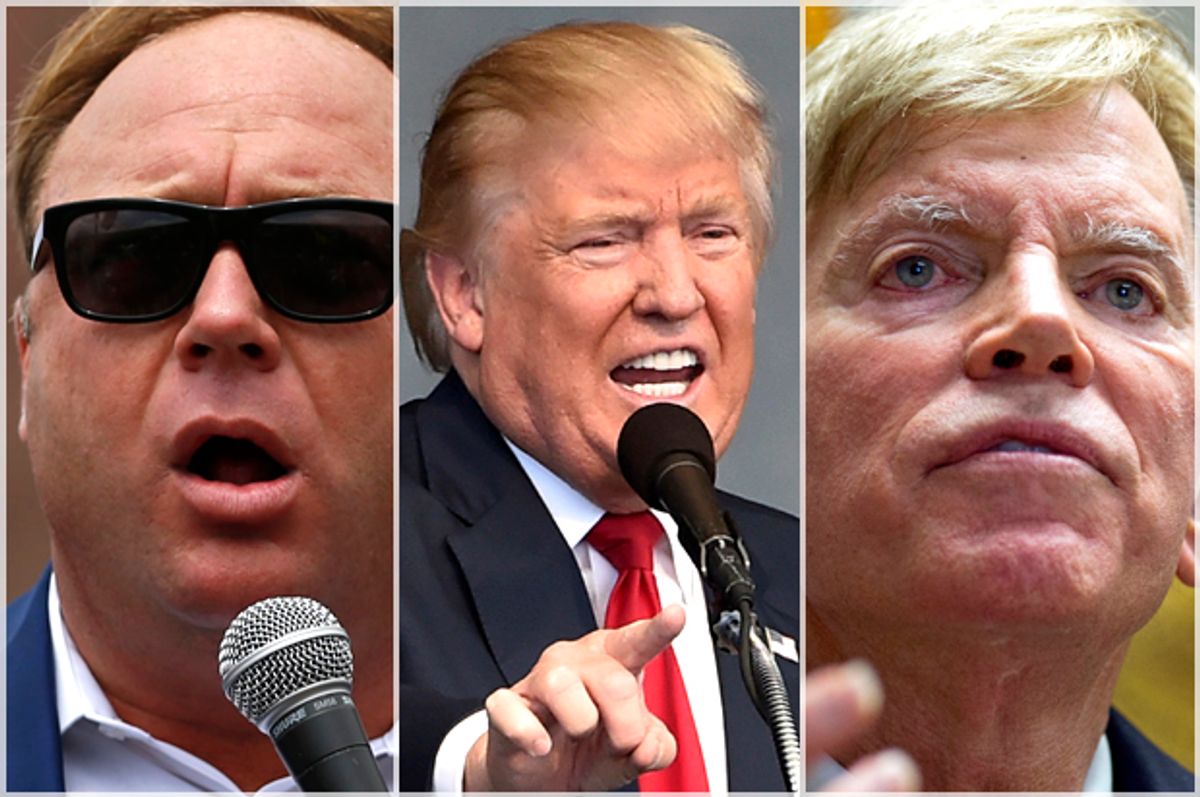 It's dizzying trying to keep up with the craziness in the presidential campaign of Republican nominee Donald  Trump these days. On Wednesday we had rolling revelations of sexual assault and misconduct, lies about the WikiLeaks data dump of hacked private emails and Trump pretty much coming unraveled on the stump, with a Mussolini-esque speech promising to put Hillary Clinton's lawyers in jail. It was quite a day.

It's been well documented by now that Trump and his advisers are plugged into the far right on a level we've never seen before in a presidential campaign. He has a close connection to the fringe with campaign CEO Steve Bannon, former Breitbart head and godfather of the alt-right movement, and assistant campaign manager David Bossie, professional Clinton character assassin and founder of the right-wing "oppo" group Citizens United.

Even campaign manager Kellyanne Conway made her bones in the 1990s as a Bill Clinton TV "prosecutor," who also happens to be married to a right-wing lawyer who was deeply involved in setting up the Paula Jones case. Trump's kitchen cabinet includes dirty trickster Roger Stone and professional conspiracy theorist Alex Jones. And while he seems to compulsively watch more mainstream outlets like CNN and Fox News, it seems clear that Trump is also heavily influenced by the Drudge-driven paranoid narratives that have favored him throughout the 2016 race.

What this has led to is a campaign with millions of followers so deeply mired in convoluted conspiracy theories that they have completely lost touch with reality. Most obvious of these, of course, is the birther conspiracy that held that Barack Obama was not a native-born U.S. citizen and was therefore an illegitimate president. Trump didn't publicly indulge in the more sinister of theories which suggested that Obama was some sort of "Manchurian candidate" planted by a foreign power. But it fits so well with his xenophobic worldview that it's fair to assume it played some part in his obsession with the tall tale.

During this campaign Trump has "wondered aloud" whether Sen. Ted Cruz's father was involved in the JFK assassination, suggested that Supreme Court Justice Antonin Scalia's death was the result of foul play, said that the president personally intervened to persuade the New York attorney general to investigate Trump University for fraud, insisted that neighbors of the San Bernardino shooters had noticed bombs lying all over their house and didn't say anything and asserted that climate change is a hoax.

Trump has repeatedly suggested that the 9/11 hijackers had girlfriends who were spirited out of the country after the attacks and says that 30 percent of the world's Muslims are prepared to go to war against he U.S. He claims nobody knows where the Syrian refugees who have been admitted into the country are and claims thousands more are pouring over the southern border illegally. He thinks the Mexican government is "sending" all its criminals to America.

Additionally Trump believes that the government somehow prevents people from saying "Merry Christmas" in public and that he's being targeted by the IRS because he's a Christian. He says crime is the highest it's been in 45 years. He is convinced that voter fraud is rampant and that Democrats are routinely stealing elections, including the election of President Obama. All these conspiracy theories, as chronicled by Brian Tashman of Right Wing Watch, are ludicrous fever dreams from the right-wing swamps that fuel Trump and his followers' lurid imaginations.

Trump has also bought into every tired Whitewater and Benghazi theory, even recently dredging up the old story that Democratic presidential nominee Hillary Clinton had her friend Vince Foster murdered. He has flogged ancient Bill Clinton scandals that have been fully investigated and litigated by Congress, state and federal investigators and independent prosecutors with unlimited budgets and boundless mandates.

But now it's really getting weird. As the campaign melts down over Trump's bad performances, revelations of sexual misconduct, ongoing exposés about his business failures and cratering poll numbers, the GOP nominee and his supporters are diving headfirst into new conspiracies.

Evangelical leader Jerry Falwell Jr. is convinced that House Speaker Paul Ryan and the GOP establishment plotted the release of the "Access Hollywood" tape in which Trump bragged about assaulting women:

I think this whole . . . videotape thing was planned, I think it was timed, I think it might have even been a conspiracy among establishment Republicans who have known about it for weeks and who tried to time it to do the maximum damage to Donald Trump, and . . . I just think it just backfired on them.

The 35% or so of the country that is hardcore pro-Trump is going to know that it wasn’t “liberals” that defeated Trump, but traitors within the party who abandoned him. And they are going to want to know why that happened. And there is only one answer: The Jews did it.

On the stump Wednesday in Florida, Trump riffed on the latest dark plot: the FBI, the Obama administration and Hillary Clinton's campaign have conspired to keep her out of jail.

Folks, this is out of control. And the FBI, unbelievable people. You have incredible people in the FBI. I would be willing to bet that they are so ashamed of what's happened at the upper level. I would bet they don't even sleep at night. These are great Americans and they can't believe what's going on. This corruption and collusion is just one more reason why I will ask my attorney general to appoint a special prosecutor.

Then he shouted, "She! Deleted! The emails! She has to go to jail!" Standing behind him were a group of African-Americans with signs that said "Blacks for Trump" which turns out to be yet another bizarre conspiracy cult that believes "Obama is the beast 666, given power by the dragon (serpent), Oprah Winfrey."

The Trump campaign is descending into madness. It is now prominently featuring supporters who believe that Oprah Winfrey is Satan. And that was nowhere near the craziest thing of the week.