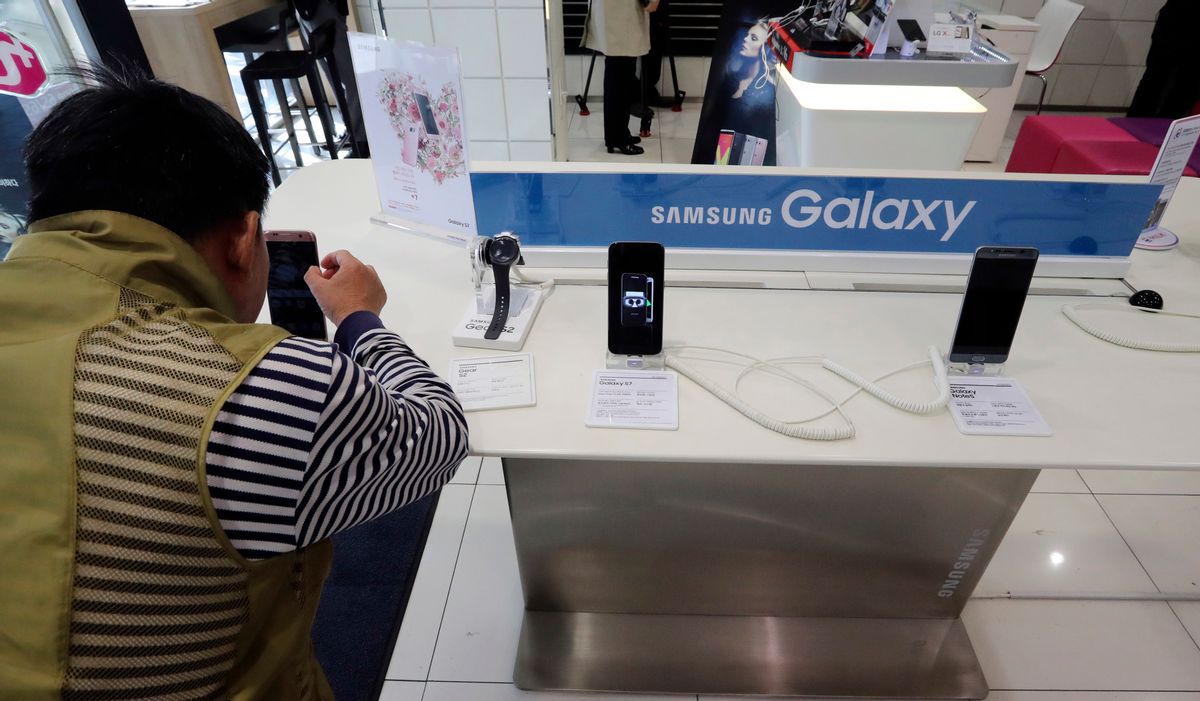 A visitor tries the Samsung Electronics' S7 edge smartphone at a shop of South Korean mobile carrier in Seoul, South Korea, Thursday, Oct. 13, 2016. Samsung Electronics says it has expanded its recall of Galaxy Note 7 smartphones in the U.S. to include all replacement devices the company offered as a presumed safe alternative after the original Note 7s were found prone to catch fire. (AP Photo/Lee Jin-man) (AP)
--

SEOUL, South Korea — Samsung Electronics said Thursday it has expanded its recall of Galaxy Note 7 smartphones in the U.S. to include all replacement devices the company offered as a presumed safe alternative after the original Note 7s were found prone to catch fire.

The move announced on the websites of Samsung and the Consumer Product Safety Commission Thursday came after Samsung announced earlier this week that it was discontinuing the product following reports that the replacements also were overheating.

The product safety agency said that 1.9 million original and replacement Galaxy Note 7 smartphones are subject to the expanded recall in the U.S., including 1 million Note 7 phones sold after Samsung's first round of recall on Sept. 15.

The agency said there were 96 reports of batteries in Note 7 phones overheating in the country, including 23 new reports since the first recall announcement last month. The company received 13 reports of burns and 47 reports of property damages associated with the phones.

"Consumers should immediately stop using and power down all Galaxy Note 7 devices, including Note 7 devices received as replacements in the previous recall," the agency said.

The botched recall is raising questions about Samsung's initial analysis of the Note 7 phone's problems. At first, Samsung said a minor manufacturing error in the batteries for the Note 7 was causing the phones to overheat.

The problem with the replacements is still unclear. Experts say Samsung may have rushed to conclude the Note 7's problem was a battery issue and it may take a long time to find the real cause.

Seeking to retain customers, Samsung is giving an incentive of a $100 credit to Note 7 owners who switch to another Samsung phone.

The Note 7 device was one of the most expensive smartphones in the market with all the latest technologies from Samsung including the ability to unlock the phone by scanning a user's iris. It was sold for between $850 and $890.