See no evil: Is the muted outcry over the video of Michael Sabbie's beating proof we've all become uncomfortably numb? 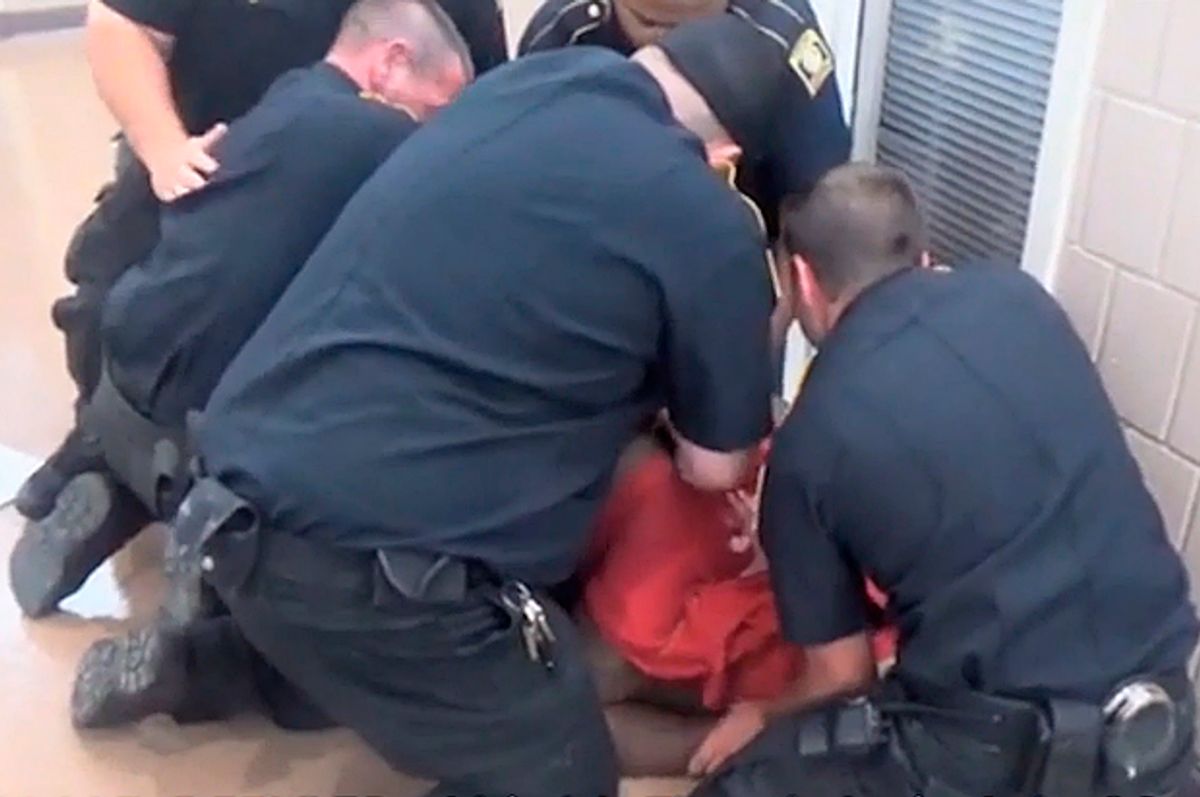 Michael Sabbie is restrained by guards, shortly before his death at Bi State Jail in Texarkana, Texas.
--

Some months ago, I promised myself that I would not watch videos of black people being killed by America’s police and other law enforcement agents. These images are like a contemporary version of the lynching photographs of the late 19th and early 20th centuries. As their forebears did before them, these videos create a feeling of “racial battle fatigue” and PTSD for those black people who view them.

As a black person who writes about life and politics along the color line, I feel this stress and pain acutely. I, like others who work this beat, worry about the impact that racial battle fatigue has on our health. Vocation is a calling; we all have burdens to bear; this is mine and theirs.

However, my personal ethics and professional obligations demand that I watch these videos — I do not have the luxury of looking away.

Thus, I broke my promise and watched the recordings of the police killings of Terence Crutcher and Alton Sterling. I must now break it again.

Last year, a black man pleaded for his life, the words “I can’t breathe” tumbling out of his mouth. Each exhalation was more labored than the last. With each breath the man’s life leaked out of him.

He would say, “I can’t breathe” nineteen times. This is a cursed number in African-American public memory — it is the same number of times that New York City Police officers shot an innocent and unarmed black man named Amadou Diallo, killing him, in 1999.

This black man’s name is not Eric Garner — the father, husband, friend, son who was choked to death by the New York City police on a Staten Island street corner in 2014 for the “crime” of selling loose cigarettes. His plea of “I can’t breathe” was heard around the world and  helped spark the Black Lives Matter Movement.

The black man who echoed Garner, saying "I can't breath" over and over, 19 times by is Michael Sabbie, a 35-year-old stay-at-home father of four who was put in jail on the border of Texas and Arkansas during July of 2015.

He was arrested on misdemeanor charges. The video showed him stopping, out of breath. Six corrections officers pounced on Sabbie after repeatedly pepper spraying him. As shown by surveillance video, Sabbie pleaded for help from his jailers, saying “I can’t breathe." He begged again, and again, and again until he was spent, his pants having fallen off, his bare buttocks and genitals exposed, he, humiliated on the filthy floor of a TexArkana courthouse, while the guards looked on with callous disregard for his health and safety. In his jailers’ eyes, Michael Sabbie was reduced to something lower than a beast — an animal in distress would have likely been treated better by them — he was a black man, a prisoner, and now an object. Michael Sabbie would die the day after the attack from pulmonary failure.

Michael Sabbie is not alone. Jerome Murdough was suffocated to death in a 101 degree solitary confinement cell at Rikers Island in New York. Andre Chapman was “cooked” to death by prison guards in Miami. Leonard Stickland was beaten to death by guards at Clinton Correctional Facility in Dannemora, New York.

Terrill Thomas died after being denied water in a Milwaukee jail run by David Clarke, a black conservative, darling of Fox News, and defender of the proto fascist Donald Trump and the racism embodied by the GOP.

America claims to be the greatest democracy on Earth, yet, it allows its citizens to die in gulag-like conditions.

These men are not dramatis personae in a Shakespearean tragedy. This is real life.

Michael Sabbie has been disappeared except to his family, friends, and those others who know about his death. And Sabbie’s death has not sparked national outrage or brought American corporate news media descending onto Bi State Jail and the Texas-Arkansas border.

There are huge divides between black and white Americans about policing and the criminal justice system. Recent research by Pew and Gallup, shows that even in a moment when police thuggery and violence against black people is routinely captured on video that whites, by overwhelming margins, still believe that America’s police are “fair” and treat racial minorities “equally”. This delusional thinking also includes a conclusion by 70 percent of whites that police are held properly accountable for misconduct.

Ignorance is not an explanation. When white Americans are made aware of the criminal justice system is racist against African-Americans they continue to support these unfair outcomes even more. Here racial bias works together with a lack of human empathy to pervert justice.

There is also a sense of disorientation and confusion that limits outrage at the sight of another black person killed by America’s police or while in the custody of the State.

The outrage meter is not limitless. These modern day lynching videos have helped to create a callous where too many in the public are now numb to the horrors they are seeing on television and online.

Moreover, as we collectively watch Michael Sabbie beg for his life, and as watch the killings of so many other black and brown people by the police, Americans of conscience are made to feel adrift on time. A black man has been elected President of the United States — twice. A black woman is the Attorney General of the United States. Her predecessor was a black man. Yet, black people in America’s prisons and jails, as well as those who are killed and abused by the country’s police, evoke of the Jim Crow-era Black Codes of the 19th and early 20th centuries, their chain gangs and forced labor camps described by Douglas Blackmon in his magisterial book “Slavery by Another Name” or Ava DuVernay in her recent documentary “13th”.

William Faulkner said, “The past is never dead. It's not even past.” He is quoted so often because his insights are so very true.

The video of Michael Sabbie is one more reminder of the deep sickness in America’s soul. A country is judged by the condition of its schools, hospitals and prisons. By those measures America is failing horribly.

I am increasingly at a loss for what to say or write about life, death, and police thuggery and indifference towards the lives and well-being of black and brown people. Maybe next time I will finally and fully follow my own advice and look away from those images … but I know that I won't — their inexorable pull is too great.