Donald Trump called for the incarceration of minorities, but no one noticed because he said he could grab women's junk

Sexual assault is a horrible injustice. So is wrongful imprisonment by a racially biased law enforcement system. 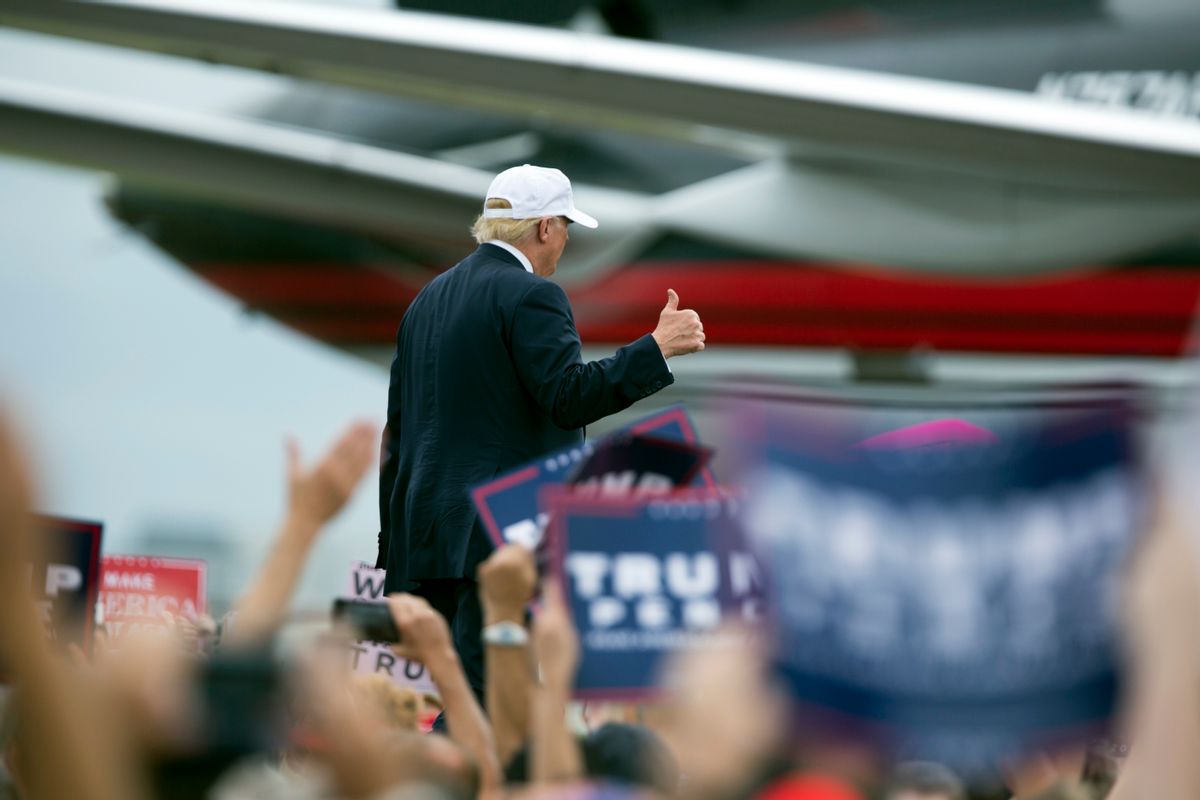 Sexual assault is a horrible injustice. So is wrongful imprisonment by a racially biased law enforcement system. On Friday, October 7, the world learned that Republican presidential nominee Donald J. Trump bragged about committing the former, and endorsed the latter. Guess which one set the world on fire?

As the nation focused its attention last Friday on Donald Trump’s just-revealed boasts about how his supposed stardom allowed him to sexually assault women, the media pundits and Republicans condemning him largely ignored Trump’s comments reported earlier that day about five young men of color—all teenagers —who were wrongfully imprisoned for years for the brutal 1989 rape and beating of Trisha Meili, a white investment banker, in New York City’s Central Park. Together, the teens became known as the Central Park Five. Trump had famously taken out full-page ads in the New York Daily News and The New York Times that described New York as a hellscape filled with “roving bands of wild criminals,” and implicitly called for the execution of the five teens—four of them black, and one a Latino. “BRING BACK THE DEATH PENALTY. BRING BACK OUR POLICE!” the ad’s headline screamed.

In 2014, the City of New York settled a lawsuit brought by the men, who had served between six and 13 years in prison; DNA evidence exonerated them and proved another man guilty of the crime. But Donald Trump told CNN last week that he wasn’t buying it. Even though it’s well-established that the confessions made by the teens the night they were rounded up by police were coerced, Trump simply doubled down. "They admitted they were guilty," he said in a statement to CNN's Miguel Marquez.

During the police interrogation of the Central Park Five, Yousef Salaam, one of those charged with the crime, told The Guardian that he could hear police beating co-defendant Korey Wise, in the next room. “They would come and look at me and say: ‘You realize you’re next,’” said Salaam. “The fear made me feel really like I was not going to be able to make it out.” Salaam was 15 years old at the time of his arrest.

“I want to hate these muggers and murderers. They should be forced to suffer and, when they kill, they should be executed for their crimes,” Trump wrote in the 1989 ad that bears his signature.

In other words, if Trump had gotten his way, five boys of color could have been executed for a crime they didn’t commit. Yet his undoubtedly racist comments last week barely caused a ripple. Racism has become such a pervasive part of his campaign that his doubling down barely made the news.

In 2002 the Central Park Five were vindicated by DNA evidence and the confession of the actual rapist. Donald Trump never apologized for his racially charged comments or the full-page ads; instead he used them as a selling point for his 2016 presidential bid.

His highest-level supporters seem to see nothing wrong with Trump calling for the execution of innocent teenagers or explaining how he’s free to assault women because he’s a “star.” Trump surrogate Sen. Jeff Sessions (R-Ala.) said on Monday that he didn’t believe that grabbing someone “by the pussy,” as, in 2005, Trump told Billy Bush he was entitled to do, constituted sexual assault. This is the same Jeff Sessions who, with far less notice by media, lauded Trump for placing those 1989 ads. During an appearance on Matt & Aunie show on Alabama’s WAPI radio after Trump’s big August 17 law-and-order speech in West Bend, Wisconsin, Sessions said of Trump’s performance, “That speech was great. And Trump has always been this way,” Sessions told the Birmingham radio audience, citing the 1989 ads as his evidence. Sessions went on to praise Trump for having the willpower to call for the death penalty in a “liberal bastion” like New York City, something, he said, only a conservative would do. “So he believes in law and order,” Sessions continued, “and he has the strength and will to make this country safer.”

Trump, pulling a page from the Richard Nixon playbook, may brand himself as “the law-and-order candidate,” but wanting innocent men to be imprisoned for a brutal crime they clearly didn’t commit shows that he either doesn’t understand how the law works, thinks it should be applied differently to people of color, or a dangerous combination of both. It all plays well, of course, to his mostly white base, whose fears he loves to stoke.

While top Republicans—from failed presidential candidate Mitt Romney to Utah Governor Gary Herbert—were fretting over the potential horror of men like Trump groping their wives and daughters, Trump’s unfettered hatred of racial minorities once again went unchecked by the party of family values.

Very few Republicans saw fit to jump ship when Trump called Mexican immigrants criminals and rapists or when he proposed banning Muslims from entering the country. The fact that white nationalists finally feel like they have a candidate who accurately represents their views didn’t cause a mass exodus of GOP leaders, and barely any Republicans mentioned the Central Park Five comments while trying to take the moral high road this weekend. And why would they? Racism in the Republican Party is a feature, not a bug.