By Ben Norton - The Associated Press 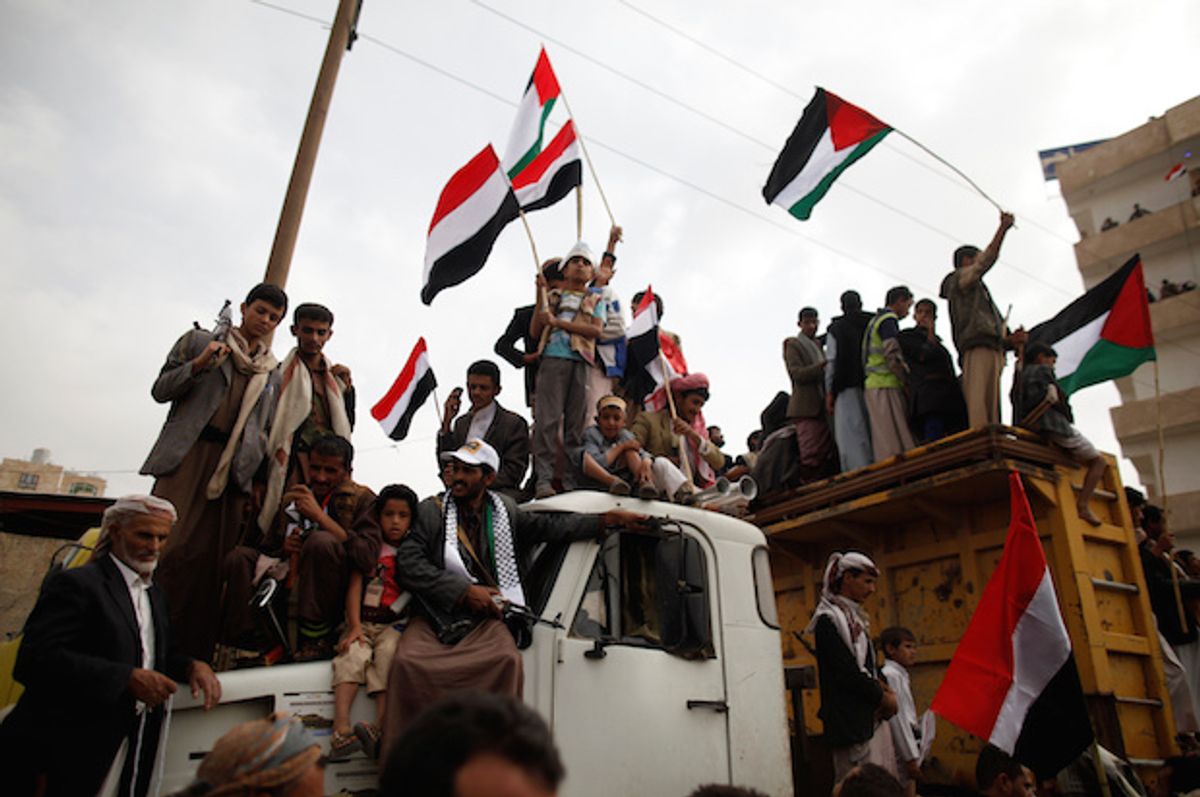 Supporters of Yemen's Houthi rebels stand atop a truck as they demonstrate to mark the annual Al-Quds Day in the capital Sana'a, on July 1, 2016 (Reuters/Khaled Abdullah)
--

U.S. officials said the strikes were in response to two incidents this week in which missiles were fired at Navy ships. The U.S. blamed the Houthis for the attacks, although the rebels denied carrying them out.

The U.S. strikes marked the first shots fired directly by the U.S. against the Houthis in Yemen's ongoing war.

They come after the U.S. has supported a destructive Saudi-led bombing campaign in Yemen, the poorest country in the Middle East, for 19 months. At least 10,000 Yemenis have been killed in the war, according to the U.N.

The U.S. previously provided logistical support and more than 1,000 refueling sorties to coalition warplanes, which have bombed a vast array of civilian areas, resulting in the majority of the more than 10,000 civilian casualties.

Many of the atrocities carried out by the Saudi-led coalition have been committed with U.S. weapons, including widely banned cluster munitions. The Obama administration has offered more than $115 billion in arms deals and military assistance to Saudi Arabia since 2009.

The coalition accuses the Houthis of being supported by Iran, although the extent to which they are actually linked it debated.

Yemen is the seventh Muslim-majority country with ongoing U.S. airstrikes.

No information on casualties from the U.S. missiles was provided by American officials. The three radar sites were in remote areas, where there was little risk of civilian casualties or collateral damage, said a military official who spoke on condition of anonymity.

President Barack Obama authorized the strikes at the recommendation of Defense Secretary Ash Carter and the chairman of the Joint Chiefs of Staff, Gen. Joseph Dunford, Pentagon press secretary Peter Cook said in a statement.

Cook insisted that the U.S. "will continue to maintain our freedom of navigation in the Red Sea, the Bab al-Mandeb and elsewhere around the world."

Loai al-Shami, a Houthi spokesman, declined to comment immediately on the U.S. strike.

The U.S. attack comes mere days after the Saudi-led coalition bombed a funeral in Yemen's capital, Sana'a, on Saturday, Oct. 8, killing at least 140 people and wounding more than 600. The mayor of Sana'a was killed in the coalition attack, one of the deadliest in the war.

Human rights groups have expressed outrage over the deaths and accused the U.S. of complicity, leading the White House to say it was conducting a "review" to ensure U.S. cooperation with longtime partner Saudi Arabia.

Despite the review, however, U.S. officials confirmed that there has been no change to U.S. military and logistical support to the Saudi-led coalition.

The day after the Saudi-led coalition massacred hundreds of Yemeni civilians at the Sana'a funeral, the U.S. resumed refueling Saudi jets.

Meanwhile, Human Rights Watch said on Thursday that the funeral bombing constitutes an apparent war crime and that the remnants of missiles found at the site of the attack showed that they were American-made. It said a disproportionate number of the victims were civilians when the coalition carried out two airstrikes.

An international investigation is needed into the "atrocity," said Sarah Leah Whitson, Middle East director for the rights group. She said the attack on the funeral joins a long list of abuses by the coalition.