Hearing negative stereotypes about yourself might just reinforce those feelings 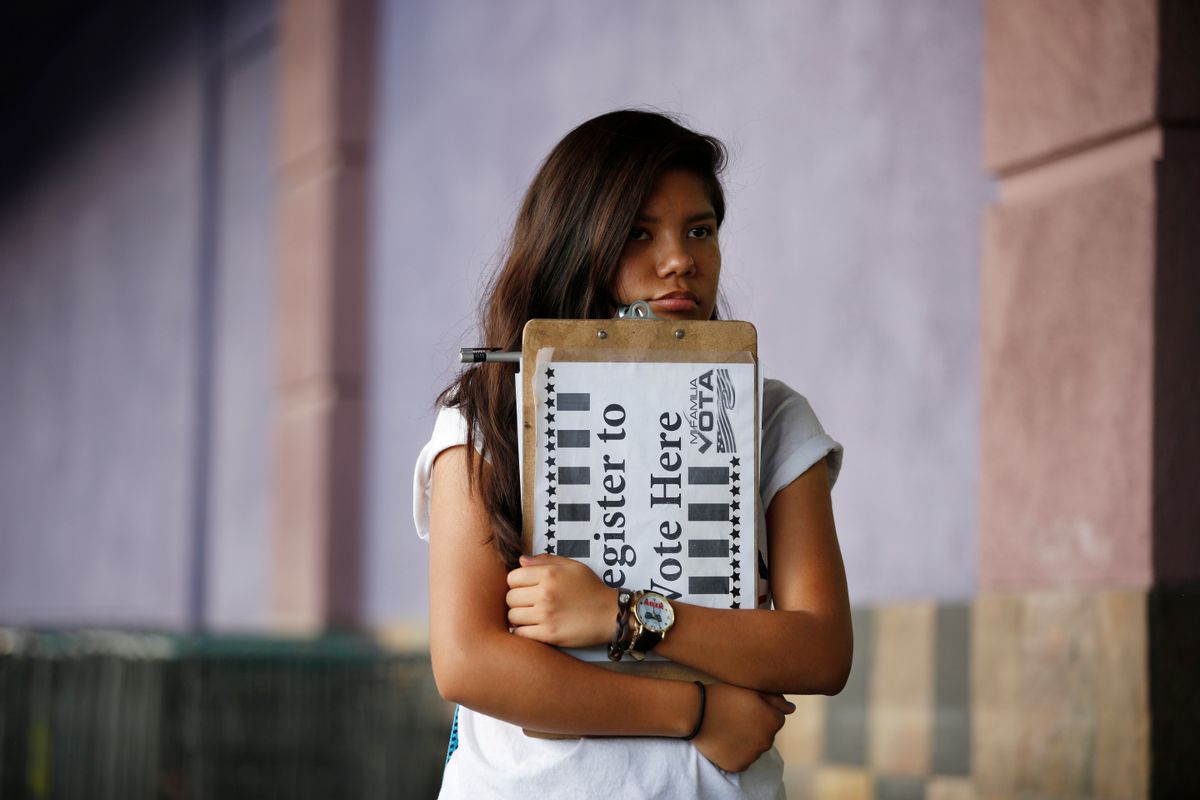 Fabiola Vejar waits to register people to vote in front of a Latino supermarket in Las Vegas on Thursday, June 9, 2016. Shielded from deportation under an Obama administration program that protects those brought to the country illegally as children, Vejar, 18, cannot vote. So she volunteers with Mi Familia Vota, encouraging others to be heard at the ballot box. "I don’t have that voice," she says, "but there's other people ... who feel the way I do. They should vote." (AP Photo/John Locher) (AP)
--

There has been much conversation among political pundits, including some Latino leaders, about the so-called “Trump effect.”

Many believe the unprecedented level of insult and racial bias espoused by Donald Trump toward Latinos, particularly Mexicans, will result in overwhelming increases in Latino turnout in November. Some commentators estimate the increase could be as much as 17 percent. In my opinion, these arguments are based on two false assumptions:

This popular narrative assumes every Latino who feels insulted will absorb the insult in the same way. What this narrative overlooks is that one-third of Latinos in the United States are not of Mexican origin. Latinos who are of other national origins, myself included, are aware that insults to Mexicans often are applied to them as well. Yet, as I show in my book "Latino Politics,” these different origins and migration histories affect how Latinos interpret and respond to attacks on different parts of their community.

This narrative also ignores the ongoing, destructive effects of being a member of a marginalized group within U.S. society. These negative experiences affect Latinos’ attitudes toward politics and political engagement. People often lament low levels of Latino turnout — only 48 percent of eligible Latino voters turned out to vote in 2012. These turnout numbers most often are framed as an individual failure of Latinos, rather than as a reflection of how Latinos, as a group, are socialized into U.S. politics.

We’ve seen this before

In my book "Fluid Borders,” I explored Latinos’ reactions to the strongly anti-Latino and anti-immigrant environment that surrounded the campaign for Proposition 187 — a 1994 ballot initiative in California that denied social services to unauthorized immigrants and their children. The environment was in many ways analogous to what we see today.

All of the Latinos I spoke to were well aware of the negative perceptions of them. What varied was whether those feelings of racial attack led them to turn out and vote.

For those who had what I called a “mobilizing identity” — a positive Latino identity combined with a sense of group worth — the negative context moved them to engage in politics. For those that did not feel positive about being Latino, those attacks led to greater disengagement. In the most simple terms, if you believe non-Latinos have negative images of you, hearing about negative stereotypes just reinforces those feelings. It doesn’t necessarily lead to action.

Why does this matter today?

People understand the current political context through the lens of their historical experiences. If you have been raised to believe that you have no power to improve your circumstances, especially through politics, a national party candidate reiterating racial hatred will not automatically lead you to act. It could just reinforce your sense of exclusion and result in deep and destructive feelings of despair.

I believe that will be the true cost of the Trump campaign.

Trump is the Republican presidential candidate — ostensibly the leader of his party. He has used the bully pulpit to say: Mexicans are “rapists” although some, he says, “are good people;" that an Indiana-born judge cannot be objective because his parents are of Mexican origin; and that we need a “deportation force” to forcibly remove the estimated 11 million individuals living in the United States without authorization.

These are just a few of the xenophobic things Trump has said this electoral cycle. Despite his comments and policy positions, pundits estimate that over 50 million Americans will vote for him on Nov. 8. What has happened during this presidential campaign has reinforced the sense among Latinos that many Americans believe we do not belong here, regardless of how many generations we have been in the United States.

Changing Latino turnout patterns will take a sustained organizing program. It will require ongoing conversations with Latino voters telling them why their participation will make a difference for them, their families and their communities. It will require building relationships with them instead of just asking for their vote. Research I conducted with Melissa Michelson and many other scholars’ studies have shown that these in-person conversations are effective. They can help transform Latino voting patterns, making the U.S. electorate more representative of our population as a whole.

Why should we care?

Without a sustained investment in organizing Latino voters between now and Nov. 8, Latino turnout levels likely will not significantly increase. Latino political disengagement is a product of our history, our politics and how we run our elections. Only the deep and sustained development of a different narrative among Latino voters, one that frames them as powerful and important agents in political decision-making in this country, will change their participation patterns.

There are many groups engaging in this kind of work this cycle including, among others, the Immigrant Voters Win PAC and Mi Familia Vota, NALEO, and Voto Latino. But they do not have enough resources to create the change I believe we need. As has been true in past elections, most of the money spent by both parties this campaign season will be used to pay for ads on television and social media. Investing that money in field efforts would result in a much greater increase in Latino turnout.

The United States has the some of the lowest levels of participation of any advanced industrialized country. Latino turnout is a reflection of a broader disengagement in U.S. politics across the board. Latinos are the canaries in the coal mine of our democracy.

Latinos with immigrant origins have chosen to be here. They came here because they believe in this country and in our institutions. I believe we should be worried that a community with such a strong belief in America is so disengaged from our politics. We should also appreciate that this state of affairs is a product of our history and the current context. Only sustained, proactive investment in proven research-based outreach strategies will change the status quo. Anger and insults are not enough.