In leaked emails, the Democratic nominee said that the system would be a bulwark against North Korea 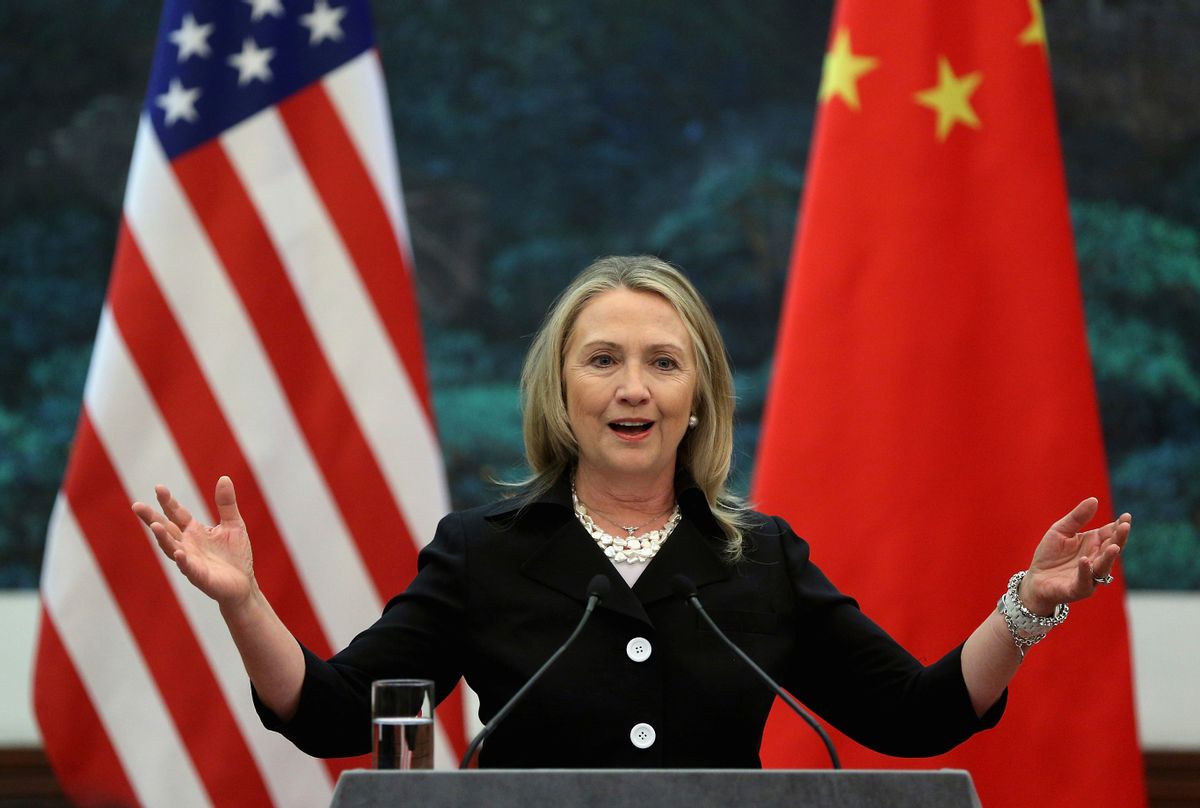 FILE - In this Sept. 5, 2012 file photo, then U.S. Secretary of State Hillary Clinton speaks during her joint conference with Chinese Foreign Minister Yang Jiechi at the Great Hall of the People in Beijing when talks between Clinton and Chinese leaders failed to narrow gaps on how to end the crisis in Syria and how to resolve Beijing's territorial disputes with its smaller neighbors over the South China Sea. Clinton privately said the U.S. would "ring China with missile defense" if the Chinese government failed to curb North Korea's nuclear program, a potential hint at how the former secretary of state would act if elected president. Clinton's remarks were revealed by WikiLeaks in a hack of the Clinton campaign chairman's personal account. (Feng Li/Pool Photo via AP, File) (AP)
--

BEIJING — Hillary Clinton privately said the U.S. would "ring China with missile defense" if the Chinese government failed to curb North Korea's nuclear program, a potential hint at how the former secretary of state would act if elected president.

Clinton's remarks were revealed by WikiLeaks in a hack of the Clinton campaign chairman's personal account. The emails include a document excerpting Clinton's private speech transcripts, which she has refused to release.

A section on China features several issues in which Clinton said she confronted the Chinese while leading the U.S. State Department.

China has harshly criticized the U.S. and South Korea's planned deployment of a missile-defense system against North Korea, which conducted its fifth nuclear test this year. But Clinton said she told Chinese officials that the U.S. might deploy additional ships to the region to contain the North Korean missile threat.

If North Korea successfully obtains a ballistic missile, it could threaten not just American allies in the Pacific, "but they could actually reach Hawaii and the west coast theoretically," Clinton said.

"We're going to ring China with missile defense. We're going to put more of our fleet in the area," Clinton said in a 2013 speech. "So China, come on. You either control them or we're going to have to defend against them."

China is North Korea's economic lifeline and the closest thing it has to a diplomatic ally, and has been criticized by the U.S. and others for not doing enough to rein in Pyongyang's nuclear ambitions. Chinese officials and state media have responded by saying that North Korea is not solely China's responsibility, and that Beijing has limited influence with secretive leader Kim Jong Un's hard-line communist regime.

Clinton also privately criticized China's position on another sensitive issue, the South China Sea. China claims almost the entirety of the strategically vital waterbody and has lashed out at an international tribunal's July ruling rejecting its claims.

Clinton told a different audience in 2013 that by China's logic, the U.S. after World War II could have labeled the Pacific Ocean the "American Sea."

"My counterpart sat up very straight and goes, 'Well, you can't do that,'" she said. "And I said, 'Well, we have as much right to claim that as you do. I mean, you claim (the South China Sea) based on pottery shards from, you know, some fishing vessel that ran aground in an atoll somewhere."

In another remark revealed in the Wikileaks hack, Clinton called Chinese President Xi Jinping "a more sophisticated, more effective public leader" than his predecessor, Hu Jintao. She noted Xi's plans for economic and social reforms, but blamed what she called "a resurgence of nationalism" on the Chinese government.

China's Ministry of Foreign Affairs did not immediately respond Friday to faxed questions about Clinton's remarks.

As secretary of state, Clinton visited China seven times and engineered Washington's "pivot" to Asia, which has long been viewed with suspicion by Beijing. The policy shift has seen a tighter focus on the region along with an increased military presence and fortified alliances with allies such as Australia and the Philippines, although the latter has been cast in doubt with the election of China-friendly President Rodrigo Duterte.

She also drew condemnation from Chinese state media last year after describing Xi as "shameless" as he prepared to speak on women's rights at the United Nations, shortly after China detained five young feminists who'd campaigned against domestic violence.