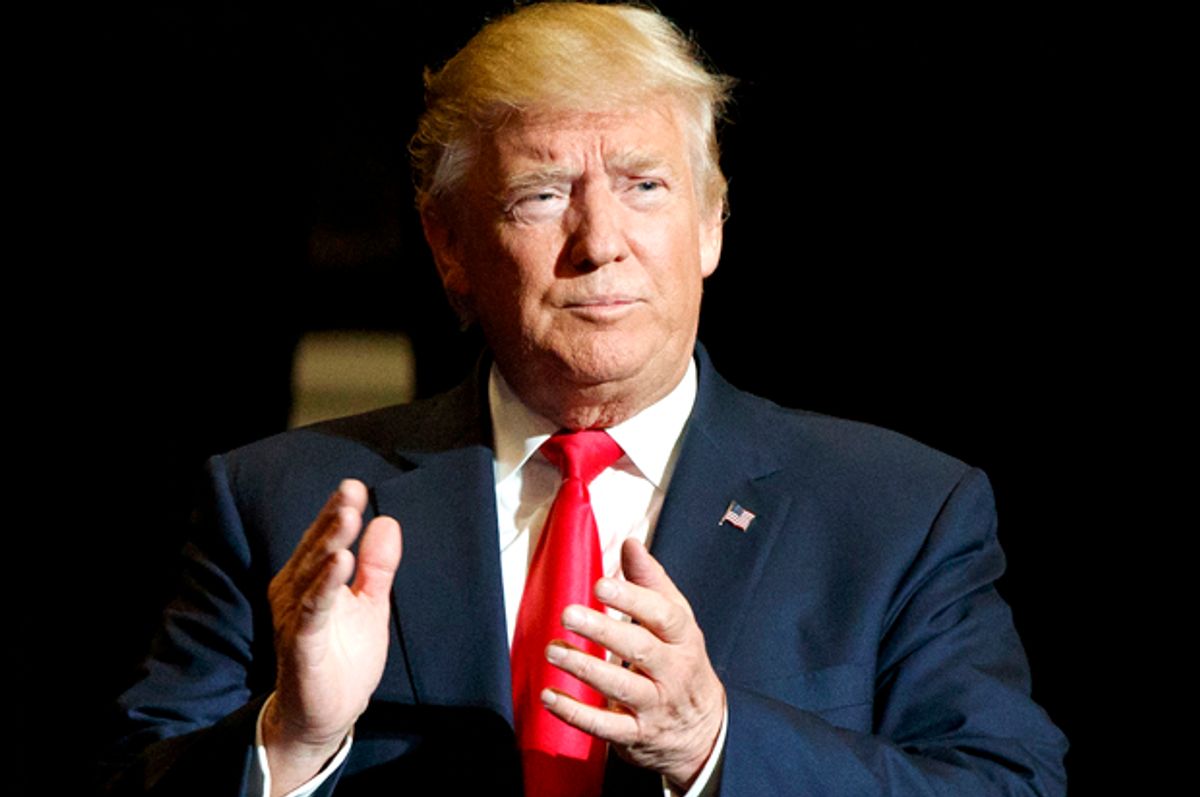 Yesterday Donald Trump used 51 minutes and approximately 5,000 words to deliver a rage-filled and almost manic speech to his followers at a rally in West Palm Beach, Florida. There Trump explained how Democratic presidential nominee Hillary Clinton and “the media” were conspiring to destroy him. He reiterated how he would put Clinton in jail if elected president. Apparently, Trump — and American sovereignty — is also being undermined by an international cabal of banks that's led by Bill and Hillary Clinton. Trump also told his faithful followers that he is a good and honorable man who is being destroyed by lying women who falsely accused him of sexual assault.

Trump’s speech is the paranoid style that has been common to movement conservatism since the 1950s, amplified by the rumor mongering and conspiracy theories that are presented as truth throughout the right-wing news media entertainment echo chamber. Trump’s speech at West Palm Beach, Florida, is also virulently anti-Semitic. His allusions to conspiracies and international banks are evocative of "Mein Kampf." Given how he is championed by white supremacists and white nationalists, this should not be a surprise. In all, it would have been much more efficient if Trump simply yelled, “It’s the Jews; damn it!”

His speech, as well as his entire campaign, is also prefaced on the concept known as right-wing producerism. To that end, Trump’s identifies an enemy group (Muslims, “illegal immigrants,” “criminals” and “gangbangers”) at which his alienated and angry supporters can vent their rage, offered up himself as a savior who will return prosperity to hardworking (i.e. white) people and then identified an international conspiracy (banks, the media) that is taking away the freedom of “real Americans.”

Members of the mainstream corporate news media are gloating at the political car wreck that is Trump’s presidential campaign in the aftermath of last week’s “Pussygate” revelations. But while they bask in feigned shock and enjoy Trump’s apparent demise, basic and important questions remain unanswered. It's tempting to move on, in an effort to keep up with Trump's latest outrage du jour, but we can't forget to ask these questions:

Why are dozens of Republican elites now abandoning Donald Trump in the aftermath of “Pussygate”?

Trump wants to have an enemies list for Muslims. He also proposed violating the Constitution to prevent immigration and travel to America by people from Muslim countries. The Republican Party’s elites did not abandon him then.

The Republican nominee suggested that Hispanics and Latinos, a group consisting of many millions of people come to American in order to kill and rape (white) women. Again, the Republican Party’s elites did not abandon Donald Trump.

Trump said that a Mexican-American judge was biased against him by virtue of the latter’s ethnic background. This is “blood and soil” racial identity politics, the very definition of racism. Again, the Republican Party’s elites did not abandon Trump.

And Trump said that black peoples’ lives are a living hell under President Barack Obama and the Democratic Party. Apparently, slavery, the Black Codes and Jim and Jane Crow were paradises for African-Americans as compared to the present. Again, the Republican Party’s elites did not abandon Donald Trump.

It appears that Donald Trump’s bigotry and racism against people of color and Muslims could be explained away by Republican leaders as a “gaffe” or the words of someone who is not a “professional politician” or he is an “outsider.” By comparison, when Trump was caught on video bragging about sexually harassing white women, an informal rule regarding propriety and behavior among conservatives had been breached. The Republican Party and its leaders care about the votes of white women; it does not care about how black and brown people are treated.

Where was the American corporate news media's morality before “Pussygate”?

American corporate news media outlets gave Donald Trump at least $3 billion in free advertising. To that end, they encouraged his rise to power in the Republican Party out of an obsessive need to present a “horse race” narrative that would draw ratings. There was little attention paid to the well-documented evidence that Trump’s temperament, as well as public and private behavior, disqualified him a priori from being president of the United States.

Most important, American corporate news media organizations, for the most part, refused to identify Donald Trump for what he is — a willfully ignorant fascist, racist, nativist, sexist bigot — out of a fear of being branded as “unfair” or “biased” against conservatives. They were also afraid to describe his white supporters as being driven by racism and racial animus, instead preferring to assign the term “economic insecurity” to describe their motivations.

In this moment (and unfortunately too many others before this fiasco), the American corporate news media failed to guard, watch over and protect American democracy. The Fourth Estate kowtowed to a fascist.

There are many lessons to be learned from Donald Trump’s 2016 presidential campaign, and hopefully, his defeat on Election Day in November. The most important of these is that racism, sexism, nativism, and bigotry are not usually separate and discrete things. A person like Donald Trump — and the basket of human deplorables who have rallied around him — usually possess most of those character defects and not just one or a few.