At least 140 Yemenis were killed and 600 wounded in the U.S.-backed massacre, which the U.N. called "outrageous" 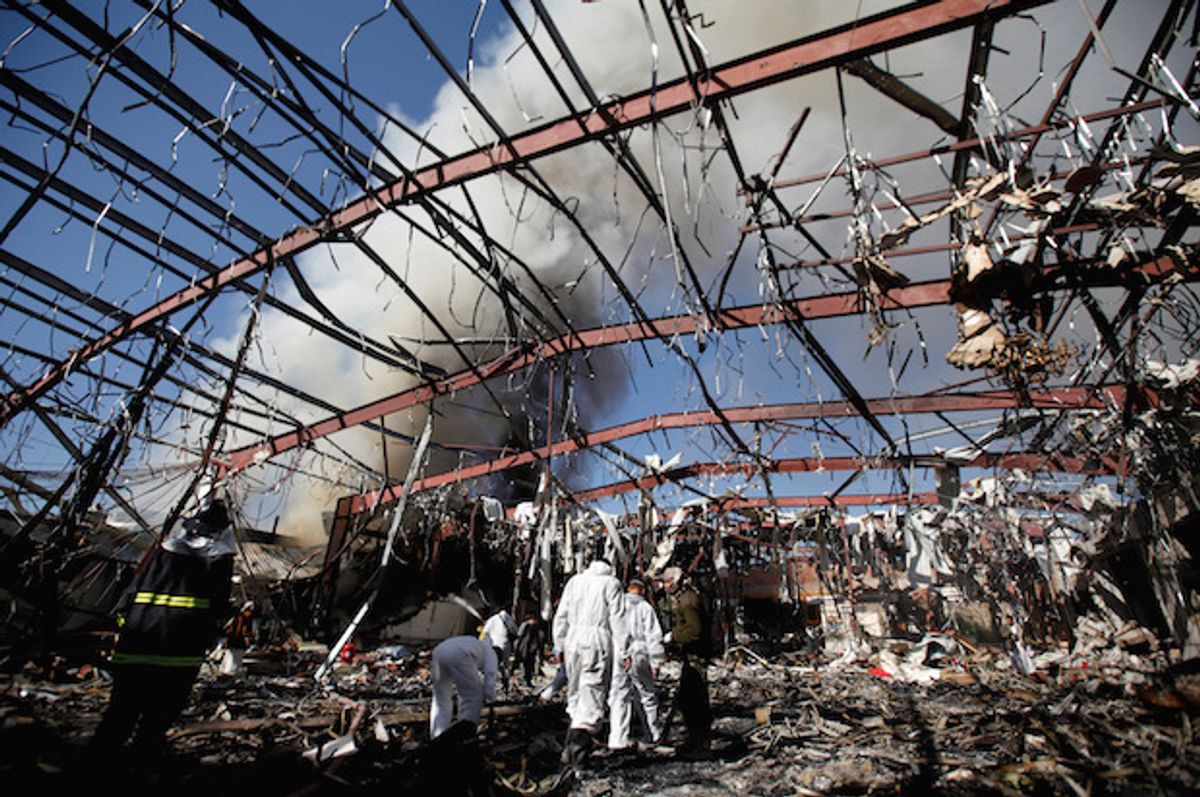 Forensic experts investigate the ruins of a community hall after it was bombed by Saudi-led warplanes in Sanaa, the capital of Yemen, Oct. 9, 2016 (Reuters/Khaled Abdullah)
--

The 19-month war in Yemen has received little coverage in the U.S. media, although it has been a constant onslaught of atrocities.

Last Saturday the Western-backed, Saudi-led coalition carried out one of its worst massacres yet in bombing a funeral in Yemen's capital, Sanaa.

At least 140 Yemenis were killed and more than 600 were wounded in the attack, the Associated Press reported. Children were killed, as was the mayor of Sanaa.

Human Rights Watch published a scathing report on Thursday, saying the attack was an apparent war crime and stressing that an independent investigation is "urgently needed."

The rights group also confirmed that the bomb used in the attack was made in the U.S., after analyzing photos and video captured by a Yemeni human rights organization and British journalists.

"Saturday’s horrible bloodbath at the funeral hall in Sanaa is only the latest atrocity in this conflict," Bery continued. "Since the conflict began in March 2015, markets, hospitals, weddings, homes, mosques and now [a] funeral gathering have been hit. The attack appears to be the latest in a string of unlawful attacks targeting civilian gatherings."

At least 4,125 civilians have been killed and more than 7,200 civilians wounded in Yemen since the war began in March 2015, according to the U.N. Office of the High Commissioner for Human Rights. The majority of civilian casualties have been caused by coalition airstrikes, the U.N. has said.

A Saudi-led coalition of 10 Middle Eastern countries, armed and supported by the U.S. and the United Kingdom, has carried out a 19-month bombing campaign in Yemen, battling that country's Houthi rebels and allied militias loyal to former president Ali Abdullah Saleh.

The medical humanitarian group Oxfam released a statement harshly condemning the coalition's bombing of the funeral, calling it "a gruesome act that served no purpose except to deepen Yemen’s misery."

"This was a massacre of civilians," said Scott Paul, Oxfam America senior humanitarian policy adviser. "It is telling that after initially denying responsibility wholesale, Saudi Arabia announced an investigation into the attack with support from U.S. experts. Not for the first time, Saudi Arabia is using U.S. support to legitimize its heinous conduct and deflect international criticism."

Immediately after the attack, the U.S. announced that it would conduct a "review" of its support for the Saudi-led coalition. White House National Security Council spokesman Ned Price said the administration was "deeply disturbed" by the bombing.

Despite the United States' stating it would conduct a review, U.S. officials confirmed that there has been no change to U.S. military and logistical support for the Saudi-led coalition. In fact, the day after the funeral massacre, the U.S. resumed refueling Saudi jets.

"This review should have begun 18 months ago, when it was clear that U.S. support would inhibit efforts to avert a humanitarian crisis and reach a political settlement," Scott Paul said.

"And it should conclude immediately, with the withdrawal of all U.S. support, including the sale of arms, to the parties," he continued. "Any other choice signals ongoing indifference to the thousands of Yemenis killed by airstrikes and the millions on the verge of starvation thanks to a senseless, preventable conflict."

"The U.S., as a party to the conflict, is legally responsible for the role of its forces in any unlawful attack, and should credibly investigate alleged violations and take appropriate disciplinary or criminal action," Human Rights Watch underscored in its report.

"The U.S. became a party to the conflict during the first months of fighting by providing specific targeting information and refueling planes during bombing raids," the rights group added.

In addition to providing intelligence to the Saudi-led coalition and carrying out more than 1,000 refueling sorties, the U.S. has offered more than $115 billion in weapons sales and military assistance to Saudi Arabia since 2009. In 2015 alone, the Obama administration approved more than $20 billion in arms deals with the Saudi regime. In three arms sales in 2015 and 2016, together worth nearly $3 billion, the U.S. replenished Saudi weapons used in Yemen.

The U.K. has also approved £2.8 billion (roughly $3.4 billion) in military sales to Saudi Arabia since the war began in March 2015. American and British military officials have physically been in the command room with Saudi command officers.

Internal U.S. government documents recently obtained by Reuters show that State Department lawyers were concerned that the U.S. could be implicated in Saudi war crimes in Yemen. State Department officials held meetings to discuss “options to limit U.S. exposure to LOAC (Law of Armed Conflict) concerns” in the war. Yet the Obama administration continued to sell billions of dollars worth of arms to Saudi Arabia.

The date and place of the funeral ceremony had been announced on Facebook and were publicly available, Human Rights Watch noted. The funeral hall, which was open to the public for the ceremony, was packed with civilians, and the Saudi-led coalition attacked at the “peak time,” when the ceremony was very crowded.

Dozens of high-ranking officials affiliated with former president Saleh and Yemen's allied Houthi rebels were also at the funeral. Although military personnel were attending, "the clear presence of several hundred civilians strongly suggests that the attack was unlawfully disproportionate," Human Rights Watch stressed.

A spokesman for the health ministry in Sanaa told Human Rights Watch the day after the attack, that at least 110 people had been killed and 610 wounded, but that the death toll was likely to rise.

A witness told Human Rights Watch that the funeral had been “crowded with people from all layers of society – military, civilian, sheikhs, dignitaries and journalists.”

A businessman who was injured in the attack recalled the chilling scene: "The scene was catastrophic. Beyond what I can explain to you or describe. . . . There were burned bodies and dead bodies all over the hall." He added, "When I got there, there were more than 50 burned bodies, many where you can still tell the features, but half of their body was gone, half of their head was gone, but the others, it was very, very hard to tell who they were."

Human Rights Watch said the funeral attack "underscores the urgent need for credible international investigations into alleged laws-of-war violations in Yemen." The rights group reiterated its months-long call for the U.S., U.K. and other governments to immediately suspend arms sales to Saudi Arabia.

Bery said the funeral attack "highlights an alarming pattern of disregard for civilian life and must be investigated." He stressed that the "lack of accountability is contributing to a climate of impunity in Yemen," adding, "The silence of the international community in regards to this war further signals a lack of willpower to hold perpetrators accountable, including the Saudi Arabia-led coalition."

The U.N. high commissioner for human rights, Zeid Ra’ad al-Hussein, condemned the funeral attack as “outrageous.” He joined the call for an independent international inquiry into violations in the war in Yemen.

Western allies of Saudi Arabia have blocked at least two attempts to set up U.N. investigations of the war.

The coalition claimed it would investigate the funeral attack on its own, as it has said it would do for previous attacks, but Human Rights Watch pointed out that "the coalition has not conducted previous investigations impartially or transparently, nor publicly carried out prosecutions for alleged war crimes, or provided redress for victims."

The Houthis and their allies have also committed "serious abuses," Human Rights Watch noted in its report. The United Nations has accused both sides in the war of violations, although the U.N. has repeatedly reported that the coalition is responsible for nearly two-thirds of civilian deaths, whereas Yemeni rebels are responsible for less than one-fourth.

Human Rights Watch additionally reiterated its call for Saudi Arabia to be removed from the U.N. Human Rights Council, noting it has previously used its position on the council "to obstruct efforts to establish an international inquiry into ongoing violations in Yemen."