Remember the economy? While all eyes are on Trump, it's make or break time on Wall St.

Will American companies emerge from a "earnings recession" or has their ability to turn to a profit been lost? 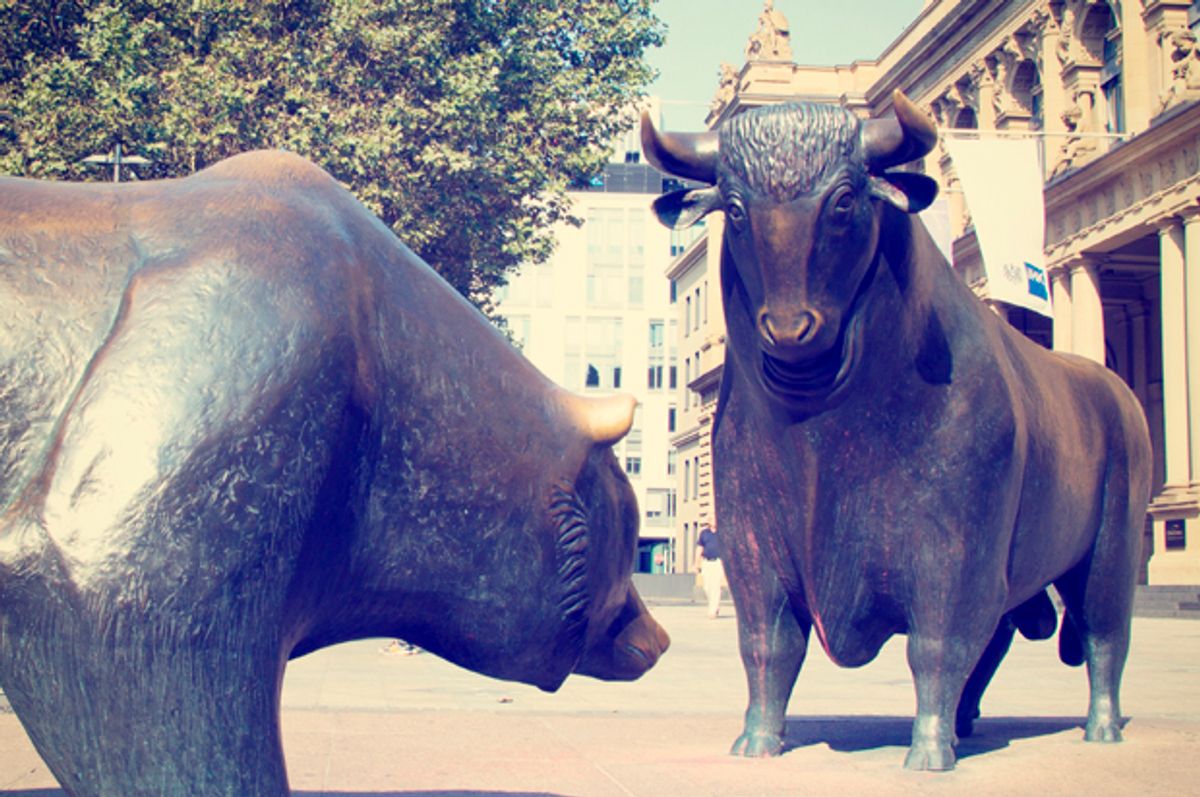 Since early 2015 America’s largest publicly traded companies have collectively posted negative profit growth. In other words we are mired in what's called an "earnings recession." That’s been bad news for the majority of Americans who own stock, especially if they’re planning to cash in anytime soon. Now investors and market watchers will begin to get a sense of how their portfolios will perform for the rest of the year, as the third-quarter 2016 earnings season begins.

The takeaway for Main Street investors: Don’t get your hopes up. U.S. company performance remains more tepid than it has since the official end of the Great Recession in June 2009.

A global economic slowdown and a battered energy sector pushed down corporate profit growth 5.6 percent in the first quarter of 2016 compared with the first quarter of 2015. While the situation improved modestly in the three months ending June 30, companies listed on the broad-based S&P 500 iIndex still reported a 3.5 percent contraction in earnings growth compared with the same period in 2015. For the third quarter, profits are expected to contract again. FactSet has estimated a drop of 2 percent while S&P Market Intelligence has anticipated an overall 0.96 percent decline.

“This is an important earnings season; no doubt about it,” Eric Wiegand, senior portfolio manager with The Private Client Reserve of U.S. Bank, told Salon. “We're coming off five consecutive quarters of negative growth and expectations for this quarter have been brought down. What’s adding to the importance of this earnings season is not just what these companies report but their expectations for 2017.”

The unofficial start to earnings season began, as it always does, with Alcoa. On Tuesday the New York-based industrial-metals producer reported a drop in third quarter revenue, and it warned that sales for the year would be lower than previously expected in its key business of selling aluminum alloys to the aerospace and automotive industries. Within hours of being released, the news knocked off more than 10 percent of the company’s share price.

In recent weeks, other companies from a broad range of industries have lowered their expectations for 2017, including Michigan automaker Ford Motor Co., which said U.S. vehicle demand is cooling; Ohio-based supermarket chain Kroger, which said its profits would be adversely impacted by food deflation; New Jersey’s aerospace manufacturer Honeywell, which said annual sales would fall on lower-then-expected global demand for its business-jet engine controls; and Pittsburgh paints maker PPG Industries, which said sluggish global GDP growth would mean lower demand for its products.

Companies are pointing their fingers at what have become the usual suspects: a strong dollar that hurts exports and profits earned overseas, weak global demand in emerging markets as well as lackluster U.S. economic growth — in the weakest postrecession recovery since 1949. For banks, low interest rates impact their ability to charge more for loans. While for oil companies, well, just look at the price at the pump these days.

“I think there's just great uncertainty as to what's going to happen in the U.S. in particular as a result of the outcome of the election,” said Yum! Brands CEO Greg Creed in an earnings call last week whose company includes KFC, Pizza Hut and Taco Bell. “It goes without saying that people are sort of trying to decide who to choose and what the impact will be on the economy. And I think people may be just hunkering down a little bit.”

It’s important to note that these forecasts come from analysts, and their forecasts about how S&P 500 companies perform tend to be conservative and lower than the actual results. Because of this margin of error, it’s possible that corporate America could actually end its five-quarter losing streak by eking out a slight gain compared to the third quarter of 2015.

But the gains come with caveats, too. Companies often lowball their forecasts, so that exceeding them is easier. And beating profits from the same quarter the previous year doesn't mean so much when the previous year was so truly dismal. The takeaway for investors is simple: Jeep your expectations low during earning season and you might be pleasantly surprised.