Refuge in Reagan nostalgia: Underwhelming "Killing Reagan" longs for a mythical past

This election season is so awful that "Killing Reagan" comes off as downright comforting, albeit barely watchable 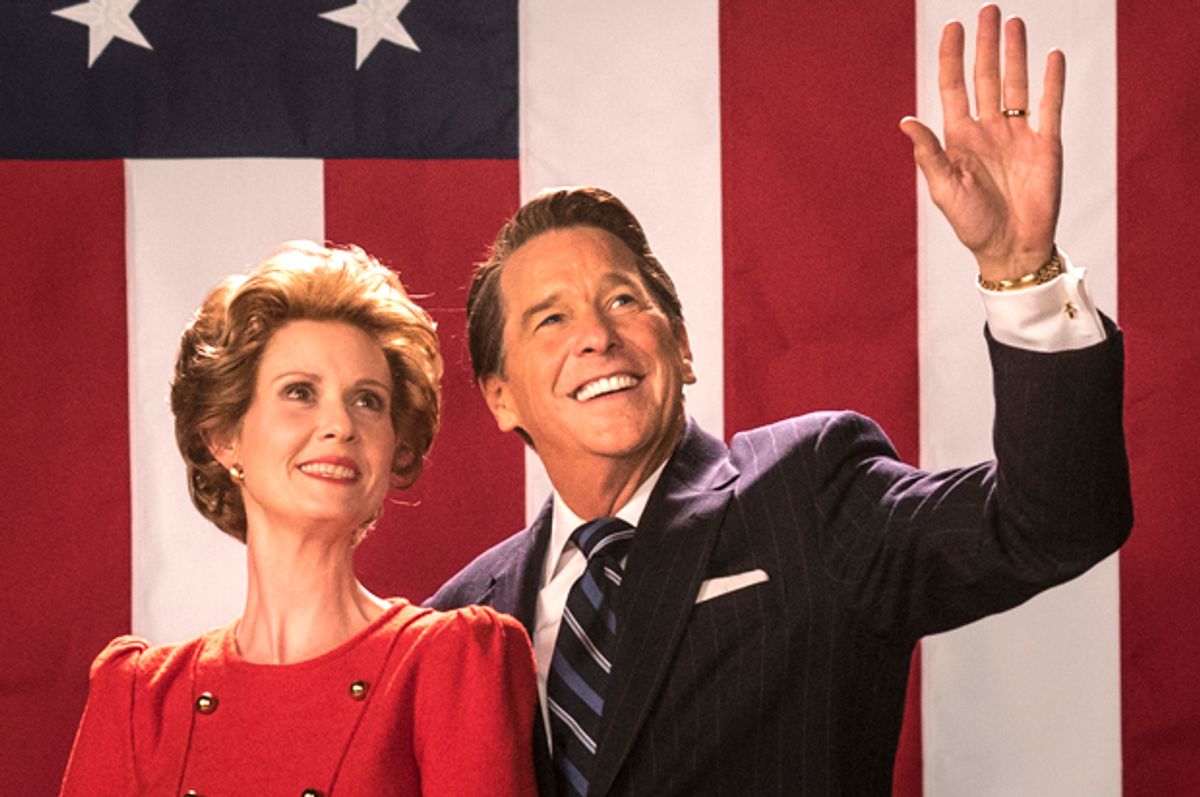 If there were ever a time when Americans might hunger for a film about the Reagans, it’s now.

I’m not talking about a depiction of Ronald and Nancy Reagan as they actually were — as in, the president and first lady who escalated the war on drugs, ignored the AIDS epidemic as it was spiraling out of control, and vilified feminists, African-Americans, Hispanics and the LGBTQ community. Not them.

No, we delight in the Reagans of legend and nostalgia, the gentle conservatives who turned the economy around and brought morning to America. Good old Ronnie never cheated on his wife, didn’t make a habit of forcing himself on women and was generally known to be respectful to his colleagues, be they Democrat or Republican.

Member Berry Reagan is who we need — the character at the center of National Geographic Channel’s “Killing Reagan,” premiering at 8 p.m. on Sunday.

Member Berries, for those unfamiliar with the fictional fruit, play an important role in this season of “South Park.” Characters simply pop a few on the tongue and sail away in a worry-free haze of nostalgia, sighing at honeyed recollections of times past as a berry coos about soothing pop-culture memories. “’Member Chewbacca? Oooh I ’member! Member the Bionic Man? Oh I love to ’member the Bionic Man!”

Member Berries also have a side effect, in that eventually they pluck at the root of our collective phobias. “’Member feeling safe? ’Member no ISIS? ’Member Reagan? Oooh, I ’member!”

Clinging to nostalgia, ’membering is deceptively addictive because it’s simpler than thinking. How much nicer is it to look back than to face the uncertainty and struggle of moving into an unknown future? “And that’s how we got here,” one “South Park” character observes, “to this very Member Berry election.”

Don’t we deserve a little ’membering after the hellish few weeks we’ve endured?

“Killing Reagan” offers succor and comfort by showing us the relative innocence and politeness of the 1980 presidential election in which Reagan, played by Tim Matheson, defeated Democratic incumbent Jimmy Carter, shown in archive footage.

Matheson’s Reagan is a spirited man who never called Carter the devil and never publicly disrespected him. He did have one thing in common with today’s GOP nominee — a tendency to go off-script in his campaign, which nearly cost him the election. Asked by his senior campaign adviser James Baker (Geoff Pierson) why he wants to be president, he calmly and earnestly answers, “Well, we’re at sea. The country’s lost and I know the way back.”

Prompted to explain how to lead the country back, he replies with certainty, “Get the government off the people’s back, fix the economy, and beat the Russians.” Nancy Reagan (Cynthia Nixon) stands nearby, just over his right shoulder, her mask of determination reflecting her husband’s surety.

That, my friends, is one wholesome bite of Member Berry pie, a romance between president and first lady served up as an amnesia-inducing sweet.

Getting there requires wading through a bombastic soundtrack, gallons of sweaty weirdness from John Hinckley Jr. (Kyle More) and a teleplay taking so much care to avoid controversy that its writer, Eric Simonson, forgot to make the tale interesting.

Such hesitance is understandable when a person recalls what happened 13 years ago with “The Reagans,” a CBS miniseries punted to Showtime after conservatives complained that it maligned the man’s legacy without actually having seen it. They needn’t have bothered — it was a wreck that few remember.

“Killing Reagan” compares slightly better, although to call it middling would be a kindness. One cannot entirely fault Rod Lurie’s direction for the film’s shortcomings; arguably, he was working with fundamentally flawed source material. “Killing Reagan” represents the fourth collaboration between National Geographic Channel, Ridley and Tony Scott’s production company Scott Free, and Bill O’Reilly, who co-authored with Martin Dugard the New York Times bestseller upon which the movie is based.

O’Reilly’s “Killing” franchise has been successful for him and for Nat Geo. The previous airings of “Killing Lincoln,” “Killing Kennedy” and “Killing Jesus” gave the cable channel its three most-watched programs of all time. The book, however, has been widely criticized by multiple Reagan biographers and a number of the 40th president’s aides for including factual inaccuracies and a debunked myth that, to its credit, the film does not portray.

Instead, we’re subjected to a blow-by-blow account of the days leading up to March 30, 1981, and the deranged, “Taxi Driver”-obsessed Hinckley’s attempt to gain actress Jodie Foster’s attention by shooting Reagan, James Brady (Michael H. Cole) and a member of the Secret Service outside of the Hilton Hotel in Washington, D.C.

To avoid the book’s most controversial pitfalls, “Killing Reagan” shackles viewers to Hinckley’s storyline, Reagan’s surgery and the quarreling cabinet, as Secretary of State Alexander Haig (Patrick St. Esprit) famously seizes the opportunity to attempt to elevate his political status. This approach results in a forgettable teleflick that feels bland and safe, dulling its appeal.

Nixon’s work grants “Killing Reagan” some weight in the tender moments depicting Ronald and Nancy’s romance. As she explained to Salon in a video interview, Nixon believed Nancy and Ronald Reagan acted with the best of intentions, and that respect shines through in her performance.

Her depiction contains more complexity than Matheson’s, whose kindly, low-key Reagan adds little originality to a role that’s been imitated to parody time and again over the years. (Frankly, Bruce Campbell provided a more interesting interpretation in the second season of FX’s “Fargo,” and that role was merely a cameo.)

Someday there will be an engrossing cinematic portrait of Reagan that explores the man’s faults and merits with equal measure. “Killing Reagan” is not that film. But it may provide solace of a sort to people needing a reminder that there was a time when political conflict was mostly inspired by differing ideas regarding policy and philosophy. That it was all in the name of creating collective a vision of the finest, best America, of a country that is not just great, but good.