The ethical rot of Wells Fargo, from the top down 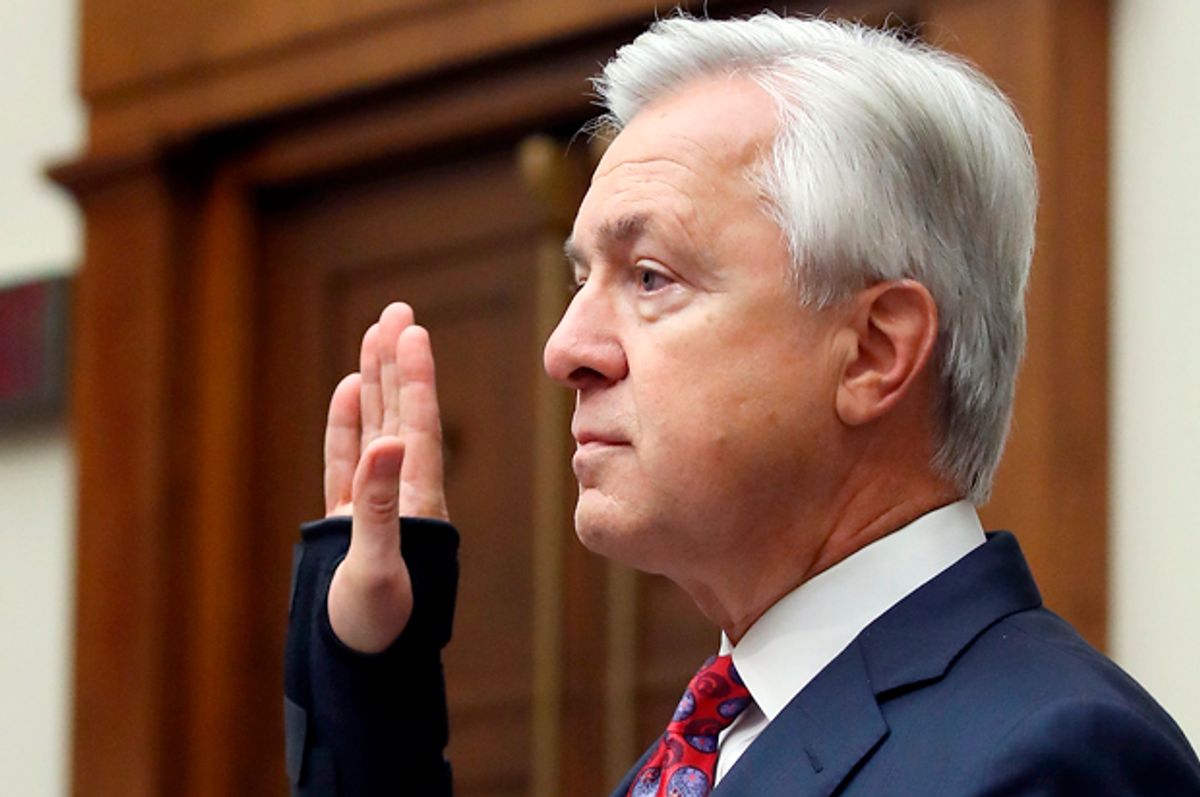 Just when you thought that big banker greed had surely bottomed out with the 2008 Wall Street crash and bailout, along comes Wells Fargo, burrowing even deeper into the ethical slime to reach a previously unimaginable level of corporate depravity.

It's one thing for the giants of finance to cook the books or defraud investors, but top executives of Wells Fargo have been profiteering for years by literally forcing their employees to rob the bank's customers. Rather than promoting a culture of service, executives have pushed a high-pressure "sales culture" since at least  2009, demanding that frontline employees meet extreme quotas of selling myriad unnecessary bank products to common depositors who just wanted a simple checking account. Employees were expected to load each customer with at least eight accounts, and staffers were monitored constantly on meeting their quotas — fail and they'd be fired.

That's why the bosses' sales culture turned employees into a syndicate of bank robbers. The thievery was systemic and not subtle: Half a million customers were secretly issued credit cards that they hadn't requested. Fake email accounts for online services were set up without customers' knowledge. Debit cards were issued and activated without telling customers. Depositors' money was moved from one account to another. Signatures were forged — and, of course, Wells Fargo collected fees for all these bogus transactions, boosting its profits.

This is not a case of a few bankers gone rogue, but of a whole institution gone rogue, rotting from the head down. Some stories of corporate villainy make me throw up my hands in astonishment. But this one is so putrid, it makes me literally throw up.

The sorry, still-evolving saga of Wells Fargo systematically stealing from its small depositors is a gag-inducing story of executive-suite greed. Start at the very top, with CEO John Stumpf, who claimed at a recent Senate hearing on the scandal to be shocked and "deeply sorry" that thousands of his employees had been opening bogus accounts in the names of non-English-speaking and elderly customers.

The silver-haired bank chief assured senators that he and other top bosses knew nothing about this massive breach of the bank's code of ethics, blaming low-level employees and firing 5,300 of them.

But John: First, weren't you the one squeezing those employees relentlessly to push customers into multiple accounts? Second, how could you possibly not notice a huge crime spree that rampaged throughout your bank's branches for seven years? Third, what about all those calls that honest employees made to your "ethics hotline" every day? And, fourth, while you now cravenly blame your $12-an-hour employees for this bank-run mugging operation, it turns out you read about it in a 2013 expose by The Los Angeles Times. Why didn't you stop it then?

Stumpf didn't act because he was busy stuffing his own pockets with the loot, hauling off more than $100 million via his personal pay in the last four years alone. What a deal: Workers are pressured to rob customers, then they get fired, while the boss of the caper grabs a fortune and protects all the higher ups — and he expects to get away with it all by making a non-apology to some senators.

But the chief is not the only one who should be held accountable at Wells Fargo. Where were its board members, who are empowered and duty bound to set, monitor and assure ethnical corporate behavior from the top down? For seven years, this 15-member board of governance sat idle, apparently incurious about the corporation's flagrant, widespread thievery, even after the report by the Los Angeles Times exposed it. Far from investigating and clamping down, the board kept shoving multimillion-dollar bonuses at Stumpf and other top executives. This is a powerhouse board, made up of top executives from other corporations, former government financial officials and big-time academics. And they are extremely well paid to be diligent, receiving as much as $400,000 a year to keep Wells Fargo honest.

What's at work here is the ethical rot that now consumes America's entire corporate system — a system that steals from the many to further enrich the few, buying off the integrity and vigilance of those who run it. Excuse me, but I have to go throw up now.