The rise and fall of Ken Bone: This is what happens when real humans become Internet memes 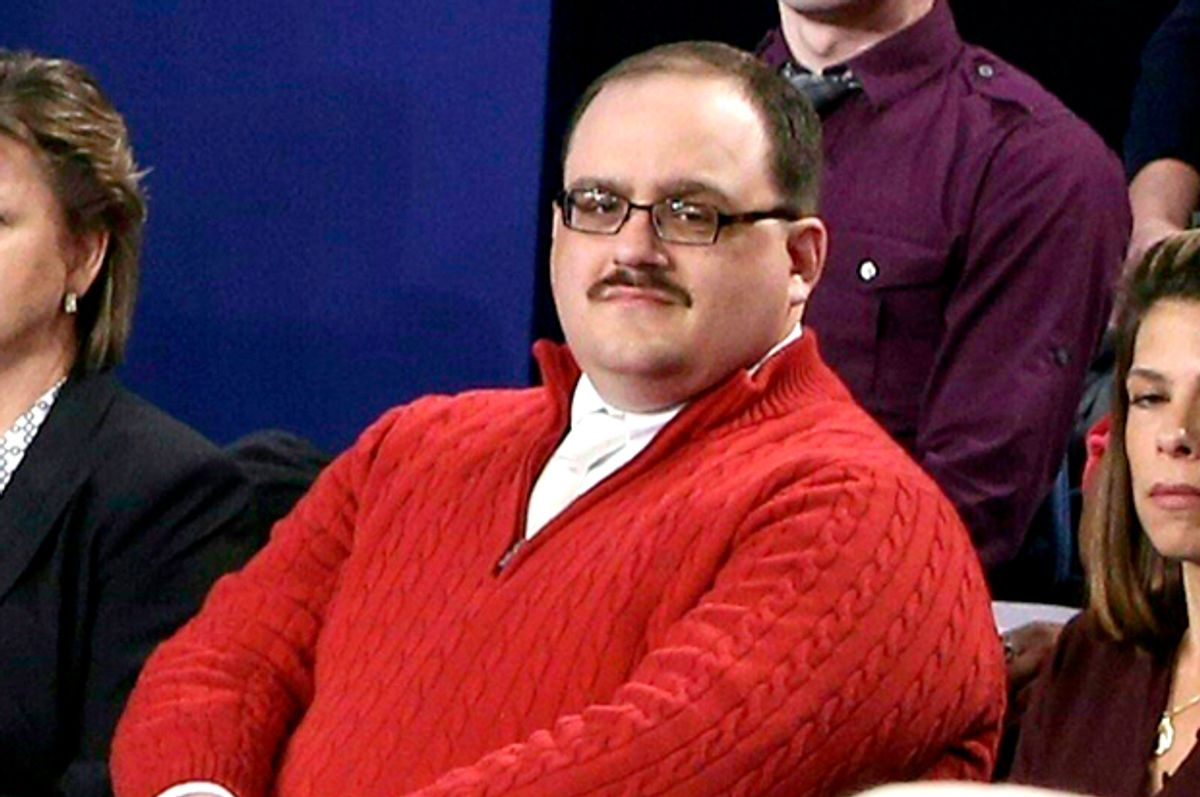 If the Internet was desperate for a new meme, Ken Bone delivered. The IZOD junkie and former Christian rock drummer was the breakout star of Sunday night’s bloody presidential debate, which saw Republican nominee Donald Trump throw everything but the kitchen sink at his opponent, Hillary Clinton. Bone, an undecided voter tapped by Gallup, asked the candidates an earnest, straightforward question about energy policy and quickly became the Internet’s cause célèbre. His now-iconic red sweater, the epitome of Omaha chic, sold out within a matter of hours as shoppers planned their Halloween costumes.

For many, Bone represented the humanity lacking in this year’s election. Prior to the mild-mannered swing voter’s question, Trump threatened to have Clinton thrown in prison. He brought up her husband’s alleged sexual assaults, even inviting the women who claimed that Bill Clinton abused them to the debate. Trump repeatedly interrupted her and lashed out at the moderators for intervening. He even compared Clinton to “the devil.” In contrast, Bone’s presence was a respite from the ugliness — and even comforting. “The Daily Show” host Trevor Noah called him a “one-man basket of adorables,” while Twitter user @zacthezac commented that Bone “looks like the human version of a hug.” A parody Twitter account imagines Bone as a folk hero in the vein of Jimmy Stewart’s Mr. Smith, the only good guy left in America.

There’s an air of condescension, however, to Bone’s embrace that’s unshakable. Shortly after he became a household name, the red-sweatered swing voter spawned a “sexy” Halloween costume. He was offered a porn contract. Former boy bander Joe Jonas even inquired as to whether Bone is single — as long as he decides to vote for Clinton, that is. When a friend of mine expressed confusion over the Bone phenomenon, I explained that it was like when you claim something bad is actually “awesome,” illustrating your ironic enjoyment of it. Thus, if someone were to ask your opinion of “The Room,” the so-bad-it’s-good disasterpiece often referred to as “the worst movie ever made,” you might say it’s “great.” You do not actually think it is great.

Memes are inherently dehumanizing. To become a meme, an image must be dissociated from its reality and turned into something else. In linguistics terms, it’s a sign whose signifier is malleable — the image’s meaning, thus, is created by those who share it. When Maggie Goldenberger was in elementary school, she and her friends decided to dress up as characters of their own invention for a fun photoshoot. Goldenberger, whose favorite persona she called “Pervy Dale,” put her hair in pigtails and picked out an old vest from a box of accessories that belonged to a friend. The young girl held up a stack of “Goosebumps” books and flashed a demented smile, braces aglow as if she’d just won the lottery. It was a game, just a joke between friends, one not meant to be seen by millions.

Years later, that private photo became “ERMAHGERD Girl,” one of the most enduringly popular memes on the Internet. The figure is associated with a kind of innocent, pre-ironic excitement, harkening back to a time when getting your monthly shipment of Scholastic books was a very big deal. For Goldenberg, though, the unwanted attention came with a downside. The people sharing the meme tracked down her identity. One even posted a bikini photo of her. It could have been worse: Blake Boston, the man behind “Scumbag Steve,” claims that his family and girlfriend were harassed after an old photo of himself posing for his mother’s photo project went viral. People called his house. They hurled racist slurs at him. After getting a copy of his unborn daughter’s ultrasound, one troll told him that he hoped the child would die.

The case of Ken Bone is very different. While he claims that fans have telephoned his family, no one has wished death upon his offspring. In fact, most of it seems rather innocent — like obsessing over the fact that your grandmother still has a Motorola Razr flip phone. Bone’s normcore appeal is similar to that of Barb, the doomed best friend from Netflix’s cult hit “Stranger Things.” She’s who everyone seems to believe they were in high school, even if they were not: the awkward girl who asked for extra homework and stayed home on Friday night to organize her rock collection. Barb, whose daily wardrobe consists of mom jeans and giant glasses, is so uncool that she’s way cool — like your dad’s Members Only jacket.

That’s fine and dandy when the object of ironic enjoyment is a fictional character who doesn’t have to live the rest of her life after becoming a viral meme. If Barb’s face is emblazoned on street art and Etsy t-shirts, that’s gravy for the actress who plays her, Shannon Purser. “Stranger Things” was the up-and-comer’s first TV role, and becoming a meme might lead to bigger and better parts. After all, it’s just a character, not who Purser really is. When it’s a real person, the tone takes on what my friend Mark Shrayber referred to in Uproxx as a “subtler form of playground bullying.” You can’t call Ken Bone “fat and bald,” because that would be mean, but you can compare him to one of the characters from the board game “Guess Who.” On the Internet, fan appreciation sometimes look a lot like trolling.

What’s the difference between the two? It’s hard to define, but like a cubic zirconia, you know it when you see it. For instance, tweets commenting on his weight or appearance are obviously over the line. Take this one from @kathiemrr: “He's not fat. He's Ken big bone.” Others have compared him to Jerry Gergich, the overweight oaf from “Parks and Rec” who memorably had a fart attack. Those are easy to call. But what about the tweets calling for Bone to run as a third party candidate — or even suggesting that he should win the Nobel Peace Prize? Are they really celebrating a nice guy who just happened to be thrown into the political spotlight or are they doing something else? And what happens to Bone when it all goes away?

Bone, who works at a power plant, has said that he’s ready to go back to life as usual and cash out when his 15 minutes are up. After all, he’s just the latest middle American voter to find themselves a fleeting media sensation; there was also Tito the Builder and Joe the Plumber. In the meantime, he’s making the most of his fame. After reactivating his old Twitter account, Bone has accrued over 200,000 followers; he tweets Dad Jokes and musings about the absurdity of Internet fame. “Just saw this,” Bone posted along with a photo of himself he received in his junk email. “I'm spam now! That's the mark of a real fake celebrity.” He’s so self-aware and such a good sport that it’s hard to be mad that he’s getting the attention, even if he has started shilling for Uber. If he wants to take Twitter’s hollow applause to the bank, I say “bravo.”

Of course, the scrutiny has its drawbacks. After Bone sat for a Reddit AMA under his Internet alias, StanGibson18, intrepid users linked the handle to some unsavory comments made about Trayvon Martin and Jennifer Lawrence. In 2012, Martin was shot and killed by a volunteer neighborhood watch patrolman, George Zimmerman, who fired on the 16-year-old because he claims he felt unsafe. In a Reddit thread, Bone called his death “legally justified.” He previously admitted to looking at naked pictures of J-Law, one of the celebrities whose nudes were leaked by hackers in 2014. Many of Bone’s fans, upon learning that he is not their fantasy in-joke but rather someone with human flaws and complications, couldn’t run from him fast enough.

The Internet is on the verge of ignoring what made this a memorable moment to begin with: Bone’s question was a reminder that this no good, horrible, very bad election affects actual humans, whose livelihoods are dependent on the outcome of the election on Nov. 8. It’s not about the Orange Hitler or the competent, accomplished woman who just wants to get elected already so she can go about doing her job. It’s about the everyday Americans who continue to be caught in the crossfire of an increasingly ugly race. It’s OK to make Ken Bone a star, but let’s remember that he’s a person first, not your meme.