Activists and drunk fans converged, as the most disturbing elements of the current political world were on display 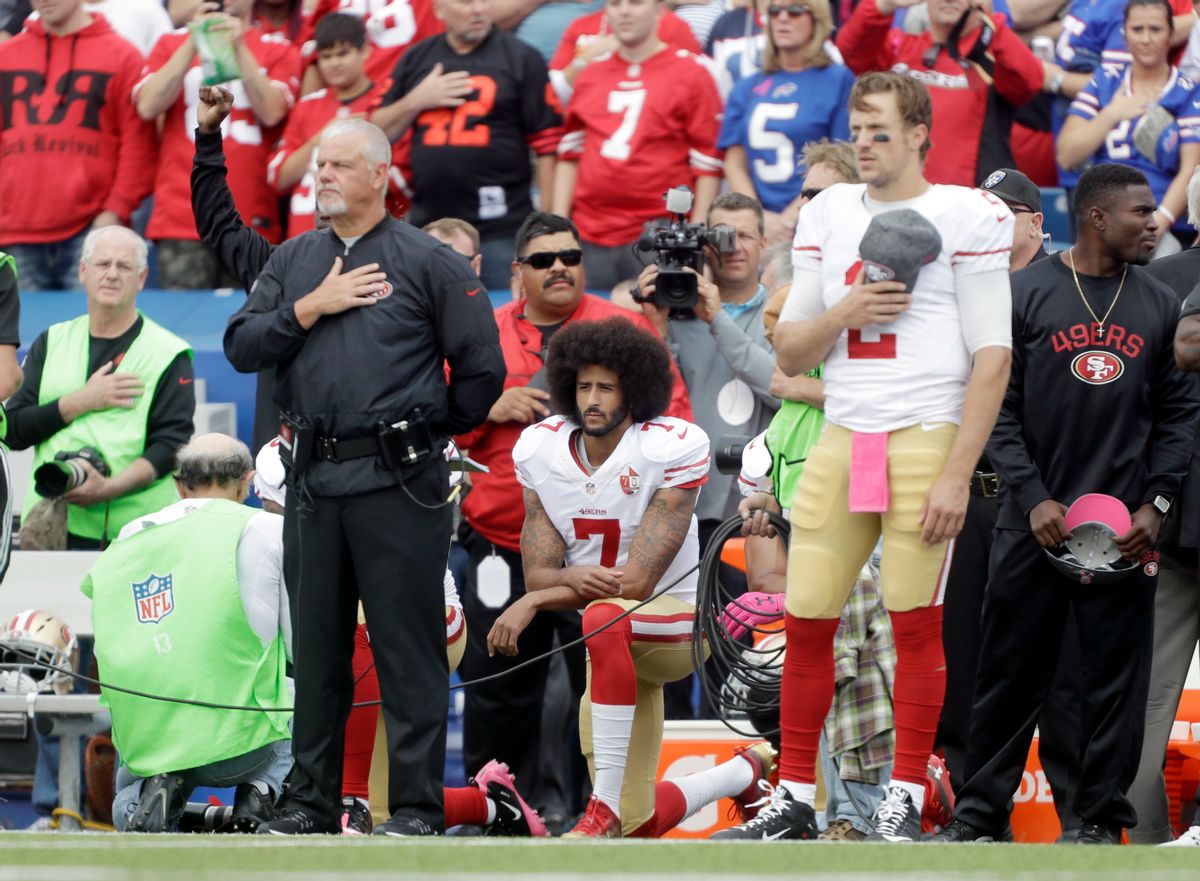 Outside the stadium, vendors sold shirts with Kaepernick's image in the sites of a rifle scope, and fans tackled a dummy dressed up like the quarterback . Nearby, other fans protested in support of the movement.

Shirts with a rifle scope trained on Colin Kaepernick selling for $10 outside of Ralph Wilson stadium. pic.twitter.com/bSuxF3G5qq

The game against the Buffalo Bills marked Kaepernick's first start of the season after Blaine Gabbert was benched.

Kaepernick knelt on the the 49ers sideline, joined by linebacker Eli Harold and safety Eric Reid. To the left of the kneeling players, cornerback Rashard Robinson and safety Antoine Bethea stood for the anthem, each with an arm raised.

The entire Bills team stood on the sideline, as players and coaches have done all this season. Kaepernick was the only San Francisco player not wearing his helmet when the Niners took the field. He was loudly booed while jogging toward the 49ers sideline. He got off the 49ers bus wearing a T-shirt with a picture of Muhammad Ali. Outside New Era Field, one vendor was selling a T-shirt "Wanted: Notorious Disgrace to America," and with a picture of Kaepernick throwing a pass and a bullseye aimed at his chest. Another T-shirt featured a drawing of a kneeling Kaepernick with the words, "Shut Up and Stand Up!" printed.

Outside the stadium, fans took out their anger on a tackling dummy wearing a Kaepernick jersey.

Kaepernick has caused a national stir with his protest, which began when he sat for the anthem during the preseason. He has since changed his protest, kneeling during the anthem. Other players have followed suit, while some have protested by raising a fist.

Kaepernick hasn't started since a loss at St. Louis on Nov. 1. He briefly played the following week before being placed on season-ending injured reserve. He then had three operations to repair injuries to his non-throwing shoulder, left knee and right thumb.

Overall, he has 27-20 record, with his numbers dropping since getting off to an 18-7 start.