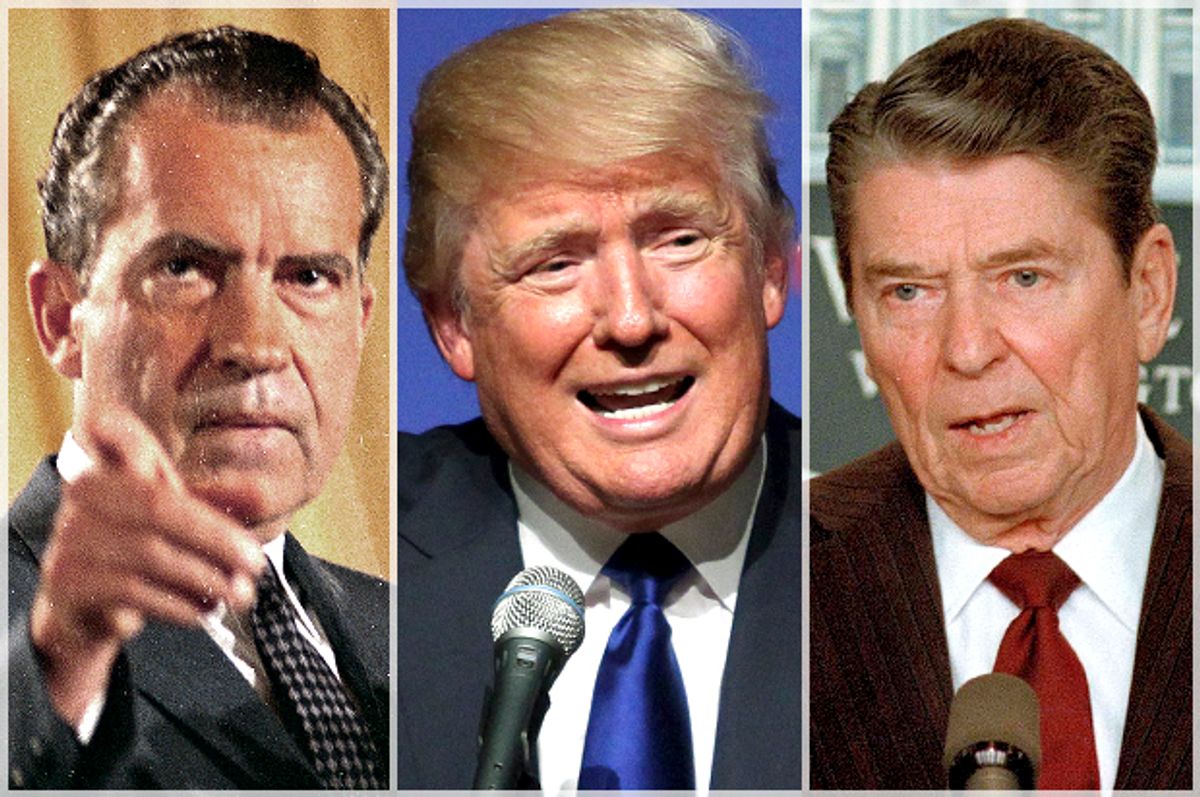 Lies don’t generally work over the long term. Sometimes they seem to, setting up a belief that the lie is a useful strategy. The "Southern strategy," the Republican Party's 50-year campaign of appealing to racial bias, provides a good example. While claiming their success based on the Southern strategy was due instead to their economic policies, conservatives created a belief within the party that the lie can be an effective and sustaining weapon of political battle.

Though apparent to the likes of journalist David Horowitz as early as the 1970s (before he moved from the far left to the far right, admittedly), this strategy began to trickle down widely to Republican apparatchiks in the 1990s, influenced heavily by the success of the late Lee Atwater. That 1980s master of the political lie influenced Rush Limbaugh and Matt Drudge, then Fox News and Ann Coulter (and so many, many more), who began to see how the strategy of the lie could be made to work — for their own personal benefit, and also for their movement.

The political-lie strategy needs two prongs. First is the lie itself. Second is the concurrent painting of the target as a liar. The most obvious contemporary example is Donald Trump's attacks on Hillary Clinton, preempting any of her attempts to bring attention to his own much more frequent lies. (Look at the fact-checking of their debates.) Similarly, Trump uses Bill Clinton’s sexual scandals to deflect attention from his own. Not only do these take advantage of the "both sides do it" false equivalency the contemporary news media has such a hard time shedding, but they box in the opponent. The Clintons have been subject to this strategy for 30 years. In fact, much of the hatred toward Hillary today comes not from anything she has done but from the campaign of lies against her that depend on calling her the liar. No matter how often she is shown not to have lied about the Benghazi attacks, the incident is thrown up as an example of her lies almost any time a lie by Trump is exposed.

Attacks on Clinton claiming that she hasn’t accomplished much over her decades in the public eye are examples not only of the second prong, but of Trump’s recognition of the economic malaise felt by so many Americans. Yet it’s the conservatives who have effectively accomplished nothing. Their influence on national policy (especially economic policy) has dominated politics for half a century. Many of those feeling the most downward economic pressure blame the "free trade" policies long championed by economic conservatives. As a result, the fissure widens between Trump, who lies about the impact of trade policies to stir the anger of many Americans, and the older Republican establishment.

It is their unwillingness to face the lies, particularly the Southern strategy (which Ann Coulter denies ever existed), coupled with the short-term nature of this political "philosophy," that is causing the Republican Party to fall apart today. Many of those who have profited by the success of the Southern strategy lie — again, I mean the argument that economics, not race, is behind conservative electoral success — have been lying to themselves, coming to believe that there is widespread support for their right-leaning ideology.

But there is not. Trump’s isolationism, at odds with Republican thinking for decades, makes that point dramatically.

Many Republicans yearned to believe that their success was a result of the stirring vision of Ronald Reagan and the economic policies long at the heart of conservative laissez-faire beliefs. They turned a blind eye to the devastation felt by much of the American middle class as they, and those around them, got richer and richer. West Virginia is nearing catastrophe; today, the population there, still believing many of the right-wing lies, is embracing the "change" advocated by Trump (though what that change would be is anyone’s guess) precisely because of the lies they’ve been fed. They blame all those in power, Republican and Democrat alike.

Old-style conservatives like George Will and David Brooks long assumed that even if the right-wing ascendancy was partly due to racial animosity, a great deal of their political (and personal) success reflected widespread agreement concerning economics. Rejecting the racist aspect of their movement, they felt that the rest was strong enough for their survival. Trump has informed them otherwise.

Older Republicans never understood that the only liar able to get away with lies over the long term is the liar with no beliefs at all — for that liar doesn’t have to lie to himself. The pundits and politicians who went along with the Southern strategy for so long, yet refused to see it for what it was, are now reaping their reward as the lied-to Republican base turns to Trump, a complete and "honest" liar. Paul Ryan, John McCain, Marco Rubio and Ted Cruz have benefited from lies in their own political careers, but none of them, I think, has been willing to admit to themselves that appeals to racism and racial hatred have helped them. That has left them vulnerable not only to Trump but to people like Alex Jones, who claims to have been told, for example, that Barack Obama and Hillary Clinton smell of sulfur and are, in fact, demons. That this sort of nonsense can even be expressed in a forum prominent enough to come to the attention of the president should outrage us all. Yet we have become so inured to junk lies that we just shrug and move on. We’ve been hearing slightly less toxic lies from Rush Limbaugh, after all, for more than two decades.

Liars, like viruses, don’t stop. They evolve to evade each antibody. If we don't start paying attention to that, our republic is doomed. It will die, not the lie.