The fight to retake Mosul: Iraq, Peshmerga prepare for battle with ISIS 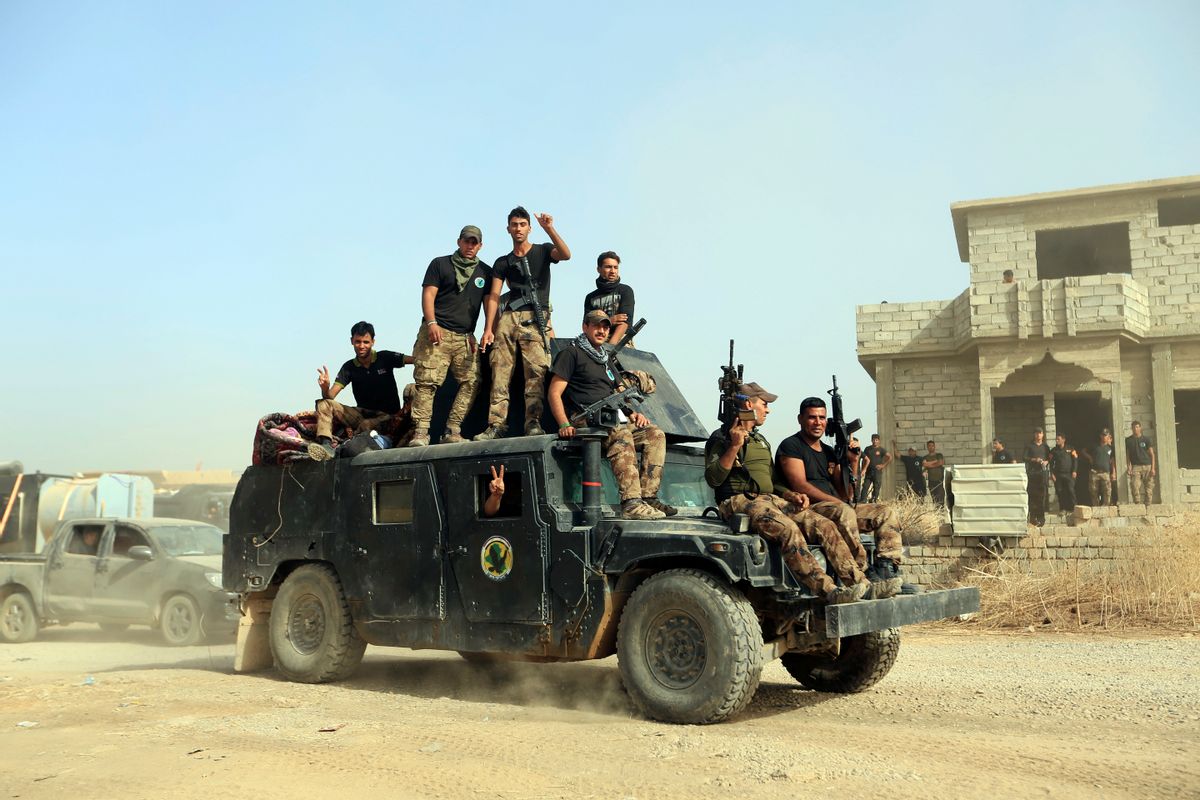 FILE -- In this Saturday, Oct. 15, 2016, file photo, Iraq's elite counterterrorism forces gather ahead of an operation to re-take the Islamic State-held City of Mosul, outside Irbil, Iraq. Iraqi forces appear poised to launch their most complex anti-IS operation to date: retaking the country’s second largest city of Mosul. While the country’s military has won a string of territorial victories that have pushed IS out of more than half of the territory the group once held, some Iraqi officials worry that the Mosul fight has been rushed and if the city is retaken without a plan to broker a peace, it could lead to more violence. (AP Photo/Khalid Mohammed, File) (AP)
--

IRBIL, Iraq — Iraqi forces appear poised to launch their most complex anti-ISIS operation to date: retaking the country's second-largest city of Mosul. While the country's military has won a string of territorial victories that have pushed the Islamic State group out of more than half the territory the group once held, some Iraqi officials worry that the Mosul fight has been rushed and if the city is retaken without a plan to broker a peace, it could lead to more violence.

HOW WE GOT HERE

Mosul fell to the Islamic State group in June of 2014, when the extremist group blitzed across northern and western Iraq, overrunning nearly a third of the country and plunging Iraq into its most critical political and security crisis since the U.S.-led invasion in 2003.

The most recent string of territorial victories for Iraqi ground forces have been in the country's west. Iraqi forces retook the city of Ramadi in late 2015, followed by a number of towns and villages along the Euphrates River valley and then Fallujah in June. This allowed Iraqi forces to weaken the group by cutting supply lines used to ferry fighters and supplies between territory held in Syria and Iraq.

Iraqi forces began moving into Nineveh province to surround Mosul in July, when ground troops led by the country's elite special forces retook Qayara air base south of the city. Thousands of Iraqi troops are now massing there ahead of the planned operation. Iraqi troops are also being deployed east of Mosul in the Khazer area, along with Kurdish Peshmerga forces, and to the north of the city near the Mosul Dam and Bashiqa areas.

A very small number of Turkish troops deployed for over a year in Iraqi territory at a base north of Mosul have caused a recent spike in tensions between Iraq and Turkey. Iraq has repeatedly called for the Turkish forces to withdraw, claiming they entered the country without the permission of the central government. It's unclear if they intend to play a role in the operation to retake Mosul; Turkey's president has said they cannot be excluded. Shiite militia fighters have said they are violating Iraqi sovereignty and have vowed to expel them.

Iraq's special forces say the fight to retake Mosul will largely be launched from the north and east. The Kurdish peshmerga forces say they will push ISIS out of a cluster of mostly Christian and Yazidi villages northeast of Mosul along the Nineveh plain, while Iraqi military troops try to cut the main supply line northwest of Mosul that links ISIS territory in Iraq to its strongholds in Syria. A large number of Iraqi military forces are also expected to push up from Qayara air base.

Once villages around Mosul have been cleared of ISIS fighters, Iraq's special forces — also called the counterterrorism forces — are expected to lead the push into the city of Mosul itself. The special forces were trained for more than a decade by the United States and are now some of Iraq's most competent ground forces. They have led the ground assault in a number of battles against ISIS in the past, including the operations to retake Tikrit, Ramadi, Fallujah and the Beiji oil refinery.

While Iraqi forces have won a number of territorial victories against ISIS over the past year, the Mosul fight is expected to be the most complex yet for the country's military. Mosul is Iraq's second-largest city and still home to more than a million civilians. Both in terms of geography and population, it's a much larger task than Iraq's military has ever undertaken previously in the fight against ISIS.

Iraq's military has been under enormous pressure to launch the operation to retake Mosul before the end of this year as Iraqi Prime Minister Haider al-Abadi has repeatedly promised Mosul would be retaken in 2016. Some Iraqi officials are concerned that the military operation is being rushed before the country's politicians have agreed on how the province will be governed after the Islamic State group is pushed out.

Iraq remains deeply divided, and the grievances between the country's Sunni, Shiite and Kurdish populations that allowed ISIS to rise to power in the first place have not been resolved. Some Iraqi officials have cautioned that even after Mosul is retaken from ISIS, violence will erupt again in the form of revenge killings or clashes between groups once allied against a common enemy.