The art of David Ortiz: Is Big Papi himself a work of art? Let's consult the experts

Big Papi finishes his baseball career as a star and an icon. But his performance might also transcend the field 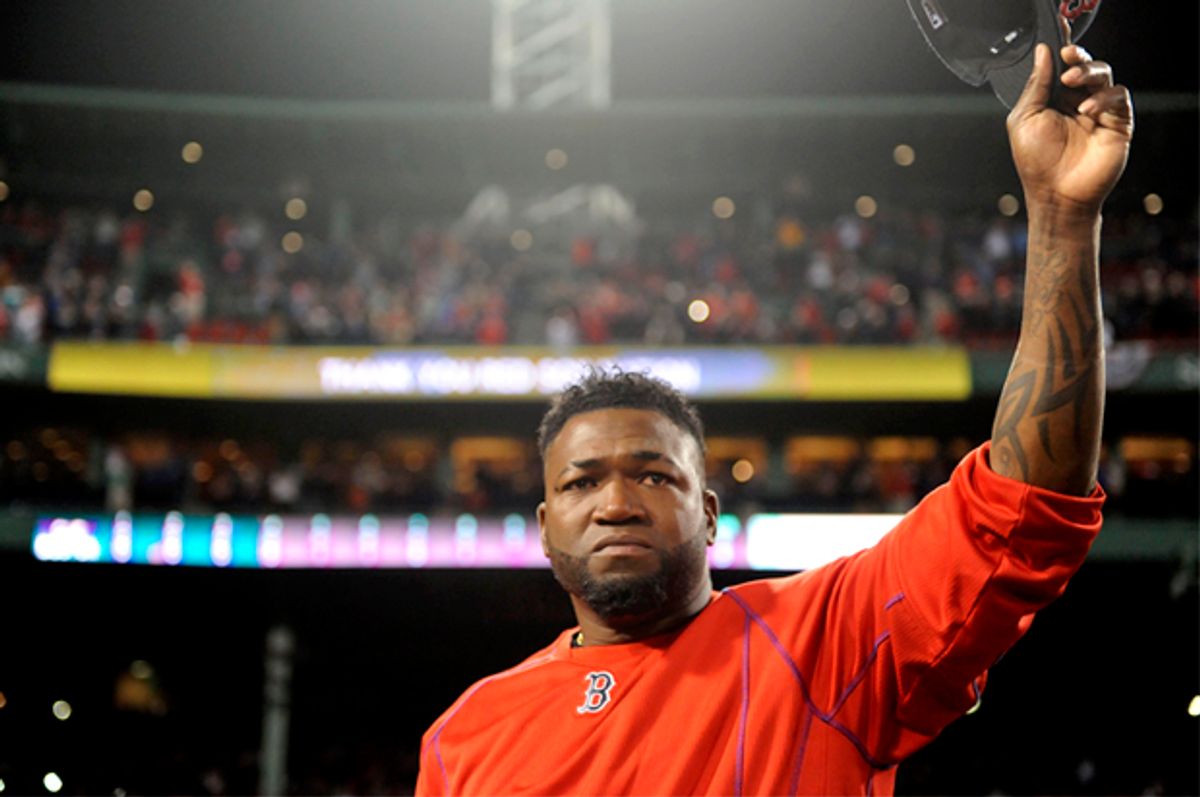 What is art? If your eyes just rolled, don’t worry — we’re not going to throw ourselves into an expansive discussion of this topic, but we can ask a more specific question about a certain subject. And this week, after my Boston Red Sox bombed out of the playoffs and my favorite player, their iconic designated hitter David Ortiz, retired, I found myself wondering — is Big Papi, himself, a work of art?

Performance art, of course, or rather drama — he’s not going to qualify as an oil on canvas. But as I strapped on my art history professor bodysuit and started to explore this notion, the answer surprised me.

Let’s get the basics down, for those unfamiliar with David “Big Papi” Ortiz’s qualifications (a nod to my European readers). Now 40 years old, Ortiz has retired after 20 years playing Major League Baseball. He is one of the best hitters in the history of the game, having enjoyed statistically the finest final season of any player, as well as a warm-hearted, fun and funny, truly beloved figure — and not just in Boston. His iconic status among Red Sox fans comes from having led them to three World Series triumphs, in 2004, 2007 and 2013, the first of which broke the team's “curse” of 86 years without a championship title.

Ortiz’s infectious personality and larger-than-life stature (he’s a huge bear of a man), along with a Tony Soprano-style demeanor — smiling teddy bear with his teammates, fearsome Kodiak to opponents — and his long list of good deeds have made him a living legend. Two cases in point: On more than one occasion he promised a terminally ill child that he would hit a home run for him, and he did. And after the Boston Marathon bombing, the city rallied around him and his impassioned, off-script cry of “This is our fucking city!” I get goosebumps just thinking about it.

Okay: a good man, a great baseball player, sure. But a work of art? Let’s see.

During the Renaissance, a renewed interest in classical texts, particularly Athenian ones, led 15th-century thinkers and creators to search for classical references to art, as a way to elevate its status from a skilled craft to a noble profession. Prior to the 15th century, and even for some time after it, painters and sculptors and architects were not considered any more respected than talented cobblers or cabinetmakers. But finding their professions singled out for praise in newly discovered ancient texts helped increase their bona fides, and led to our sense that great painters and sculptors are members of a cultural elite, making their productions more meaningful than those of simple craftsmen.

But the ancient authors didn’t always write in overt terms, separating painters from the rest. So some of the ideas of classical thinkers were appropriated. Aristotle is the primary example. In "On Poetics," he wrote of what makes for a great work of art. He was talking about drama and poetry, but Renaissance thinkers adopted it to define great painting and sculpture and buildings, as well. But for our purposes, since David Ortiz cannot be considered a painting, sculpture or building, we can consider his performance at the highest level of a sport in terms of drama (or perhaps comedy, with a home run as the happy ending).

To paraphrase Aristotle, we should ask three questions of a work of art to see if it can be considered great.

This sounds rather vague, but it is generally taken as asking whether the work successfully achieves what it sets out to. Does it perform well? 541 career home runs, 1768 career RBIs. A final season line of a .315 batting average, 38 home runs and 127 RBIs. Ortiz performs well. Check.

Well, is David Ortiz a beautiful man? I’ve got a man crush on him, but that aside, when engaged in his performance — hitting a baseball — he has a balletic athleticism that belies his gargantuan size, as well as what the experts call a “sweet swing.” But “beautiful” in the Aristotelian sense can also refer to kalon, a Greek word that can indicate a moral beauty, a nobility of spirit. Ortiz has that in spades, from his dedication to charity, both in the Boston area and in his native Dominican Republic, his compassion and charisma after the marathon bombings, and those promised-and-fulfilled home runs for ailing children. Yup, David is a beautiful man, who swings a beautiful bat.

This is perhaps the trickiest of Aristotle’s requisites to quantify. Interesting how? It is usually taken to ask whether something provokes thought and emotion, either on its own or in relation to other works of its type, in which case how it differs is what adds interest. In fine art terms, why would we want to study 10 different Annunciation paintings? Each represents the same Biblical moment: one painted by Leonardo, another by Ghirlandaio, a third by Robert Campin, and so on. Some may be executed with more skill than others (is it good?), others may appeal to our personal aesthetic or moral compass more than others (is it beautiful?), but what makes one more interesting than another? The difference is in the details.

Why do some baseball fans cheer for Miguel Cabrera as their favorite hitter to watch, and others Ortiz? Why is Ortiz so good in clutch, postseason situations, whereas other great regular-season hitters come up short? Then there’s the interest in how he adjusted his batting to be compatible with his ailing feet and aging body, raising his leg kick in preparation for the swing to compensate for slightly slower reflexes. Perhaps you have to be a baseball fan to find all this interesting — but then again, perhaps you have to be an art or theology fan to find a dozen Annunciation scenes interesting, too.

So, according to Aristotle’s definition, David Ortiz is a great work of art. But don’t take his word for it. Giorgio Vasari would likewise agree. The “father of art history” and a brilliant Renaissance painter and architect, Vasari wrote in praise of two characteristics that must be present in the work of great artists: invenzione and disegno. The Italian word invenzione means invention, inventiveness, concept — it’s what an artist imagines in their head before they touch the chisel to stone or brush to canvas. Disegno, which can mean design, drawing, blueprint, is the execution of the concept. I can imagine an Annunciation scene, but I’m no artist, and would be unable to project what I imagine in pen, paint or marble. So, does Ortiz have what it takes to warrant inclusion in a 21st-century update of Vasari’s "Lives of the Most Eminent Painters, Sculptors and Architects (and Baseball Players)"?

Consider the art of batting. It’s a psychological duel with the pitcher. Major League pitchers regularly throw a ball 90+ miles per hour, with pinpoint control, from just 60 feet 6 inches away, and also have an arsenal of varied pitches that can cause the ball to suddenly swerve or drop or move 10 miles per hour more slowly. Batters have to make educated guesses about which pitch will come their way, and where, based on the count and the game situation. There’s also situational batting to consider. For years, most teams have used an elaborate shift against Ortiz, since he likes to pull the ball. So most of the defenders are piled to his right-hand side. Slapping the ball the other way is a guaranteed base hit, if you can do it. Not only do you have to imagine what pitch will be thrown to you and where, but also where you’d ideally like to hit it. Then, with all this in your head, you have to physically be able to hit the ball. Sounds like invenzione and disegno to me.

David Ortiz, your millions of admirers and I salute you. You’re a wonderful human being, beautiful down to your soul. You’ve been a hero, a leader and a pleasure to watch for two decades, bringing glory to your homeland and your adopted Red Sox Nation. “Enjoy retirement,” I’m sure the Florentines said when Michelangelo hung up his dog-skin boots. “We’ll miss you.” As the Michelangelo of the batter’s box, you are also, by definition, a great work of art.