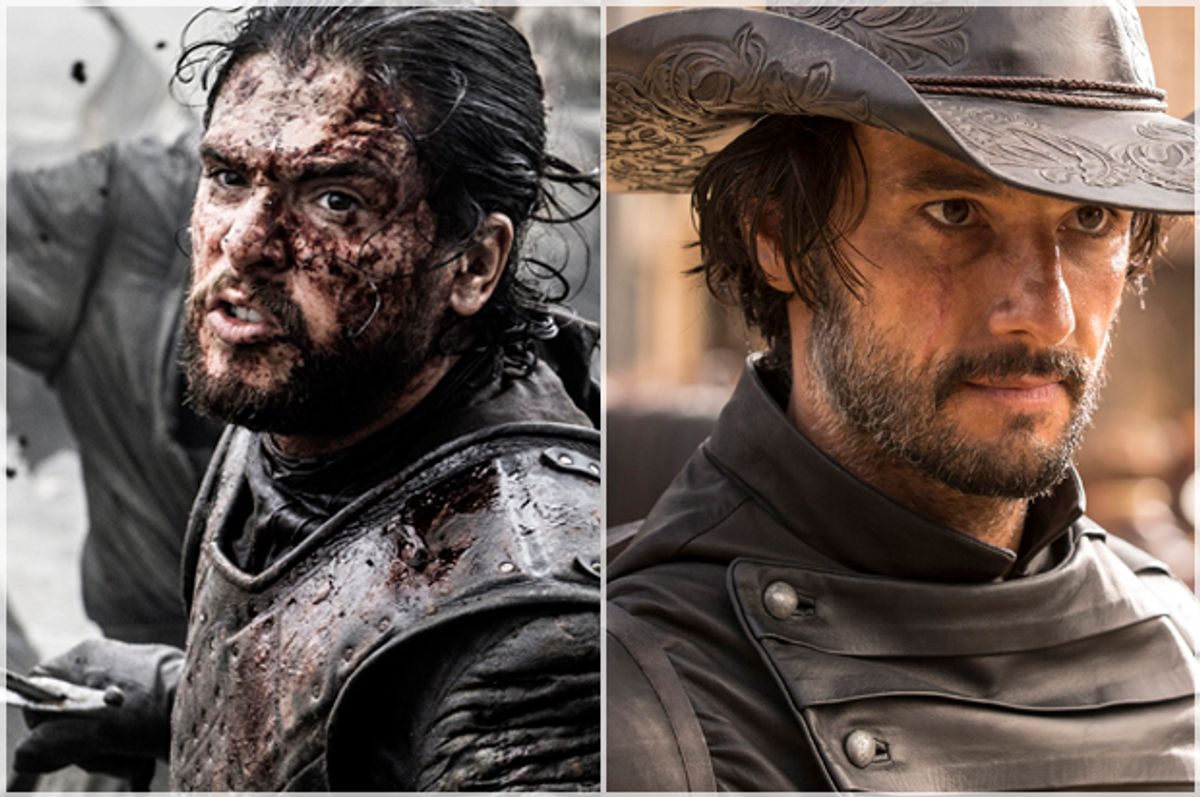 The successful launch of “Westworld,” a series set in a Wild-West resort populated by robots, has revived a decades-old argument about onscreen violence. The premise of the series, which is based on a 1973 movie written and directed by Michael Crichton, involves people coming to a park to have their way — in any way they want — with its robot “hosts.”

“Westworld” could become HBO’s biggest new show since the launch of “Game of Thrones,” the blockbuster fantasy series that has also drawn criticism for graphic violence, much of it directed against women.

Salon spoke to Tom Nunan, a veteran of television and film — he was president of United Paramount Network, a founder of production company Bull’s Eye Entertainment, and one of the producers of “Crash” and “The Illusionist” — who also teaches at the UCLA School of Theater, Film and Television, about the current state of TV violence. The interview has been lightly edited for clarity.

Let’s start with “Game of Thrones” and “Westworld,” two very prominent, talked-about HBO shows with a great deal of graphic violence and a decent amount of criticism over the bloodshed. How violent are these shows and how does violence seem to function in them?

“Game of Thrones” is a fantasy/science-fiction adventure series, set in a fantasy world that may not even be connected to our planet. It’s won the best drama series, two years in a row, from the television academy here in the United States. That’s the highest honor any show can receive in the world — and that suggests that there’s a fine balance between the violence between the fictitious characters and the world around them. What it reveals in terms of story, and the world David [Benioff] and D.B. [Weiss] have created.

It’s a certainly a show that’s hugely popular and hugely critically acclaimed. “Game of Thrones” may also be helping to keep HBO afloat.

I don’t know that HBO is suffering much in its financials, but it’s certainly been a big boon for them.

In any case it’s not a trash, cheap show that just pulls at violence at random, gratuitous moments.

That’s right. And HBO is proud — justifiably proud — of “Game of Thrones.” It’s an evocative treatment of mythology and fantasy, and it’s consistent with the genre.

And yet some people, including feminists, have critiqued it for its violence, including its beheadings and rapes, as being excessive and gratuitous. Does any of this seem fair to you?

Its an R-rated show, with a “mature” rating on cable, and all kinds of warnings on the header. And it has been on the air now for seven years. Those that are coming to the party today and saying, “This is a little bit much” are a bit tardy in their criticisms, and a bit out of touch with the range of content available on TV these days. To pick on “Game of Thrones” — HBO was very careful to describe it as a mature, graphic show — sounds weak to me.

How does it use violence compared to Quentin Tarantino’s movies?

Well, “Game of Thones” is a fantasy/adventure tale with no connection to reality as we know it. Tarantino and other filmmakers have made movies, and there have been other television shows R-rated for graphic violence in a real-world atmosphere that’s familiar to all of us. But even Tarantino’s material has an elevated and often surreal quality to it. Which, again, telegraphs to the audience that “This is not an authentic depiction of the world around you. It’s escapist entertainment in an action genre.”

Right — Tarantino’s films sometimes have a sense of taking place in a movie world where Asian action films and the Wild West and blaxploitation movies all come together — it's often a heightened, postmodern experience.

That’s right. The complaints about the relationship between violence in the real world, and violence in movies and TV, began in the 1970s, when there was a much more accurate depiction of the consequences of gunplay. In particular, it was being shown on TV more graphically than before. The medium had grown up with gunshots and rifle wounds, or worse, being almost unseen onscreen, so it was a shocking development to see ’70s cop dramas showing the consequences of gunfire in a realistic manner.

In movies we were going from John Ford to Sam Peckinpah, and from Humphrey Bogart films to "Dirty Harry."

Exactly. So the audiences, especially older generations used to tamer material, grew concerned. And over time, we’ve had more and more realistic depictions. It’s worked as far as subscription cable is concerned, where the audience member has the opportunity to buy content that is more adult and provocative than what’s ruled by a networks’ broadcast standards department, and where people could see something coming over the air without their control.

I wonder if this has to do with advances in technology in moviemaking and television production.

It may be that the outcry is just a response to how viscerally accurate things are. It’s powerful, but I don’t think it carries consequences to the real world.

So, all this said, how does “Westworld” — which takes place in a world designed for violence, and a theme of the series is the escapist, recreational violence of human beings against robots — seem to compare? How violent is the show, how gratuitous is it, how mean-spirited is the violence, what’s the style of its violence?

To be candid with you, I think it’s pretty tame. If you consider when the original “Westworld” movie came out, in the early ’70s — I think someone pointed this out when Jonathan Nolan was at New York Comic Con — the only video game out at the time was “Pong.” How Michael Crichton was able to extrapolate “Westworld,” in his imagination, from “Pong?” It’s pretty spectacular.

So our frame of reference, in terms of pop-culture content, was a benign little game of ping pong on television, with “Westworld,” at the other extreme, on film. Now we have point-and-shoot games, intensely realistic in their depiction of violence. And we have “Westworld” as an extreme version of a game, where people are interacting with robots.

I would venture that [HBO’s] “Westworld” is a lot tamer than [today’s] video games, and the world we live in today, versus the movie “Westworld,” which was much more intense than the video games of its era.

The violence in “Westworld" is sharp and jarring and intense, but there’s not that much of it. There’s a lot of other stuff going on in the show, though thematically it’s very much about violence.

Who’s committing the violence, and who’s at the receiving end? Are they all robots, or are they all human? Or are only some of them robots? What’s so cool about Nolan’s approach is that we’re never quite sure where reality begins, we’re never quite sure where the game ends. So we’re at least two resolutions removed from the actuality of the violence: We’re already in a Western world that’s removed dramatically, and hence emotionally. And then furthermore, we’re not even sure that the creators themselves, the people running the show, aren’t themselves being programmed. That’s a second iteration. And you could make a case that there’s a third iteration, since it must take place in the future, since theme parks like this don’t exist.

So what kind of effect does violence onscreen — whether movies, TV, cell phones — have on actual, real-life violence?

I’ve been working actively in the entertainment industry for more than 30 years, and I’ve never once seen a study that has proven that there’s any connection whatsoever between the violence in American culture and what we’re absorbing through movies and television.

This is most vividly understood when you consider that in Europe they’re absorbing the same content that Americans are exposed to, and their crime rate, and gun violence, is exponentially lower. Or closer to home, look at Canada: They are receiving almost the same content we are, through streaming, cable, satellite, broadcast. And the violence in their culture is almost nonexistent compared to ours.

We could look farther afield at Japan, which has a violent pop culture, but very little real violence compared to the U.S.

Yes. So unfortunately, even though I’m as pacifist in nature as it gets, and I’m horrified by the violence in American society, and I empathize with people looking for a solution in culture . . . . But that solution — there’s no proof to it.

Are there places in American pop culture where you think the violence is genuinely dangerous?

I don’t say this from a scientific point of view — I don’t have any studies to back this up. But I’m personally concerned about young guys spending eight, 12, 16 hours in a row in their parents’ basements playing point-and-shoot games. Those same guys are getting recruited to do drone work for the military.

It’s very similar — you have to have technical skills that are similar to gamer skills. And you're similarly detached from the consequences of the violence you’re witnessing. You’re in a bunker/basement/sealed-off room thousands of miles away from the weaponry you’re deploying.

Whether there’s a relationship between this and those sociopaths who go out and terrorize our malls and churches and other public squares, I don’t know. But if people are going to go snooping around pop culture, I think that’s the place to start.