Rallying college Republicans, Ryan acted as if the election were about policy and never mentioned the GOP nominee 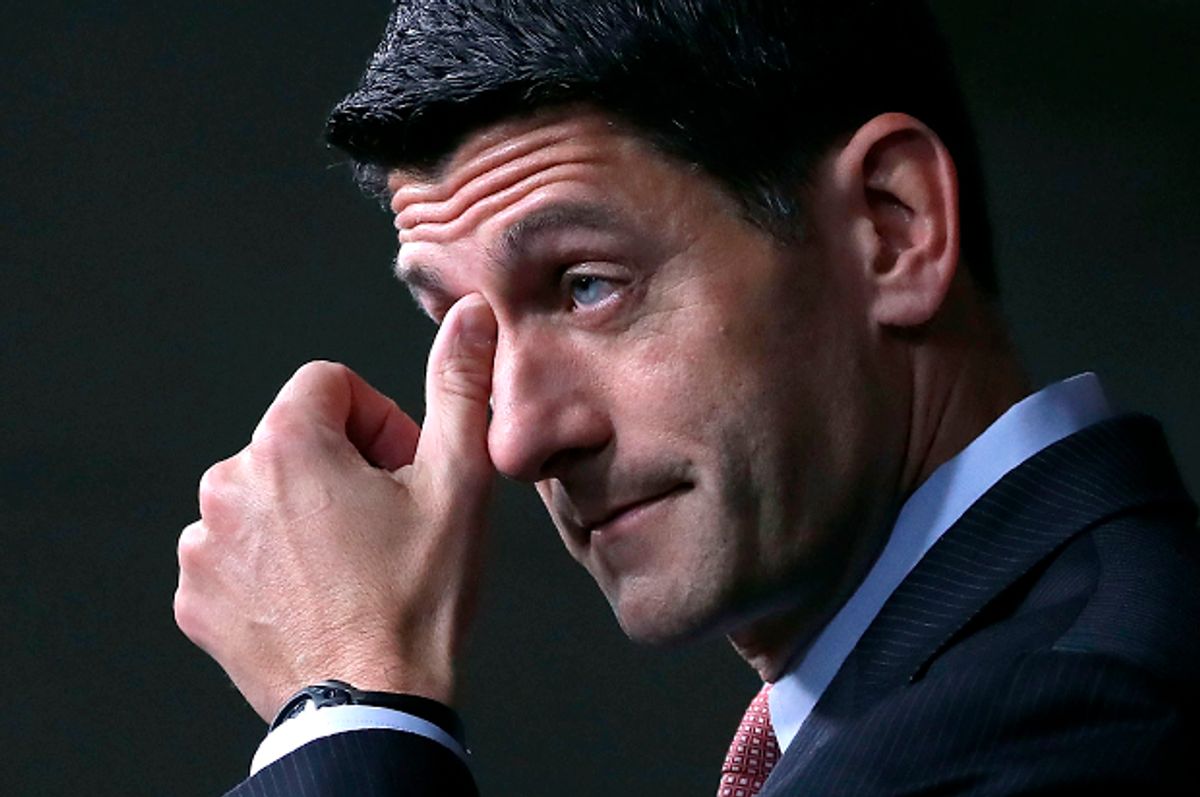 Is there a more diminished figure in the post-Trump Republican Party than Paul Ryan?

The superstar policy wonk who was supposed to give 2012 presidential nominee Mitt Romney some intellectual heft by joining his ticket. The mild-mannered scholar who was the only person who could unite the fractious GOP caucus in the House in the wake of John Boehner’s surprise retirement last fall. The third-highest ranking member of the government, a leader of a Republican Party adrift who might be able to help steer it through the chaos of a civil war between the establishment and the base that has erupted as Trump’s campaign has foundered.

Ryan’s wonkish nature is supposed to be his big draw, offering a view of government the GOP could contrast against that of the Democratic Party. His seeming lack of an instinct for the rough-and-tumble side of politics was always a strike against his taking over as Speaker of the House last year, but he agreed to give it a shot anyway. But now that angry Breitbartian paranoia has swallowed the GOP whole like a snake swallowing a mouse, Ryan’s wonkery could not be more useless or irrelevant to the moment he and his party find themselves in.

On Friday Ryan spoke to a group of College Republicans in Madison, Wisconsin. The speech was characterized in some corners as a desperate attempt to make the 2016 presidential election about issues instead of the personalities at the top of the ticket. Particularly the personality at the top of the GOP ticket, whom Ryan has been trying to hold at arm’s length with the awkward “I won’t un-endorse him but neither will I help him” formulation he has adopted.

Considering Ryan gave this speech on a day when even more women were coming forward to accuse Donald Trump of sexual assault over the last couple of decades, trying to turn the conversation toward the differences in the two parties’ visions of government was a bit like closing the barn door when the horses have not just escaped but already galloped about a thousand miles down the road. This election is not about policy, no matter how much he might try to make it otherwise, and it has not been for some time.

Ryan might as well have spent his entire time with these college students drinking lite beer and tossing televisions off the roof of the nearest frat house. Instead he spewed awkward jokes, the delivery of which made Hillary Clinton sound like Lenny Bruce. He mixed the jokes with a dystopian vision of liberalism right out of “1984” — or, more likely, right out of one of those Ayn Rand novels he supposedly makes everyone in his office read.

This was a supreme irony in the speech, that Ryan’s view of government sounds almost as nihilistic as Trump’s. It is just delivered in mild tones that sound wholly inadequate for confronting the picture the speaker is painting.

Just look at some of these quotes:

"[America is] a place where liberty is always under assault. Where passion — the very stuff of life — is extinguished. That is the America Hillary Clinton wants. And if given control of Washington, if given control of Congress, that is the kind of America she will stop at nothing to have.”

“The left intends to make it a reality. An arrogant, condescending and paternalistic reality.”

By this point I wasn’t sure if I was listening to a speech or a pitch for a dystopian young-adult novel. Compare it to Trump, who uses similarly apocalyptic terms to describe the horror that America has turned into under Barack Obama. He differs from Ryan in his strongman persona, assuring the people they have nothing to fear because El commandante Trump will fix everything.

Ryan did not even mention Trump during the speech, a sign that he has given up on his party winning the White House this cycle. He was obviously trying to present to young voters a vision of conservative governance that, he hopes, they will help bring about in the post-Trump GOP. If the party is indeed irrevocably splitting, Ryan likely hopes that the saner-sounding policy wonks will still at some point find themselves empowered.

In other words, it was typical Paul Ryan. Sure, the morally correct course of action is to denounce the fact his party has been taken over by a xenophobe preaching fascism. But he can’t do that, because he thinks there is still a chance that down the road the stars will align to allow him to pass massive tax cuts and gut the welfare state like a fish.

Ryan is a wholly inadequate solution to lead the GOP at this moment in history. But he will likely be fine after the post-election bloodletting and finger-pointing plays out. So many in the Republican party have been compromised by indulging the worst passions of the crazy base that it is stuck with him. It couldn’t have happened to a nicer group.