Puerto Ricans make up the second largest group of Hispanics in the U.S. — so why don't politicians care about them? 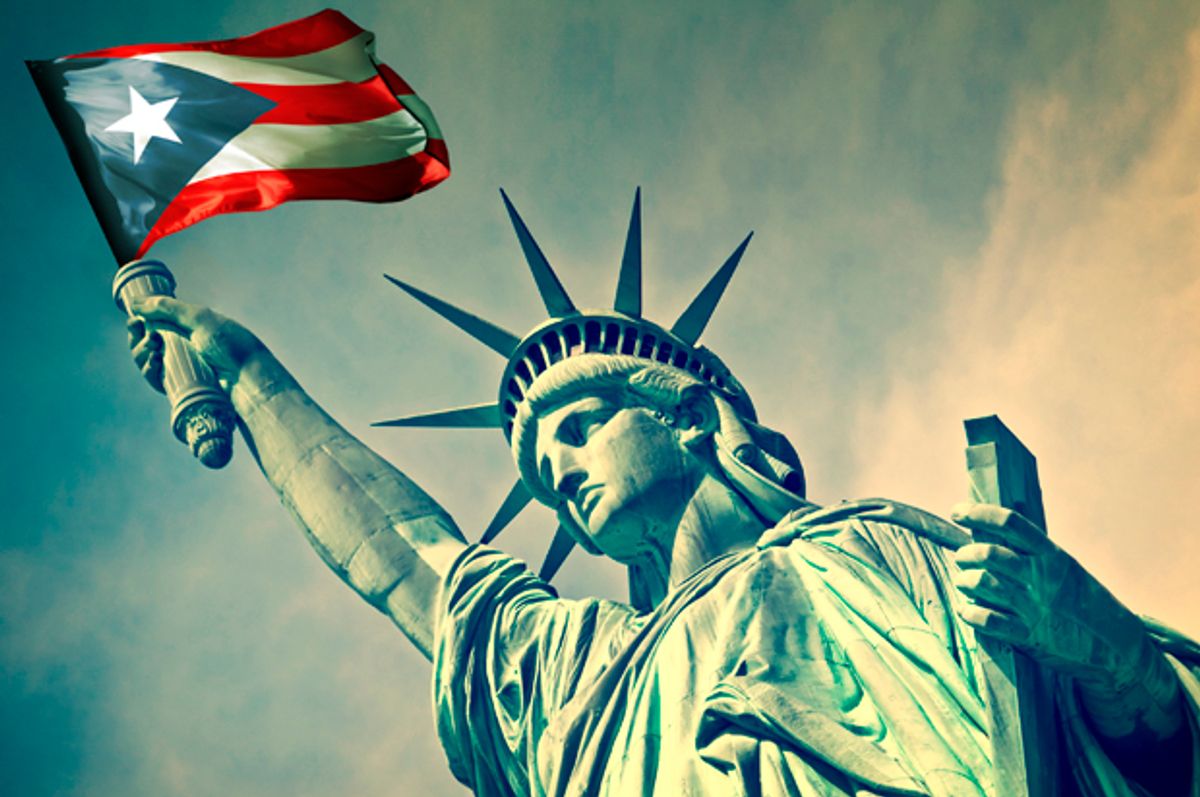 We’re now in the final stretch of an election year that has often seemed more like a scene from a bad horror film than reality, and both presidential campaigns have continued to ignore a key voter constituency: Puerto Ricans. As of last month, there were 57 million Hispanics in the United States, or 18 percent of the overall population. Of that number, 5.3 million are Puerto Rican. They make up the second largest Hispanic group behind Mexican-Americans, and their number and impact are sure to grow as Puerto Rico faces financial disaster.

In particular, Puerto Ricans have been steadily migrating to Florida, which is now home to more than 1 million. As always, Florida is a crucial swing state in this election, and both Republican presidential nominee Donald Trump and his Democratic rival Hillary Clinton have visited the state numerous times. Last week Hurricane Matthew devastated several Florida counties, leaving several people dead and hundreds without homes. As a result, U.S. District Court Judge Mark E. Walker extended voter registration in the Sunshine State until Oct. 18.

Florida, traditionally a purple state, has been something of a wild card in politics (as anyone who remembers the ludicrous drama of the 2000 election is already aware). A growing number of migrants from Puerto Rico — an "unincorporated territory" of the United States — are now relocating to Florida rather than New York or New Jersey, two mainland states with large and longstanding Puerto Rican communities.

Trump had a three-day stint in Florida last week, which included his now-legendary speech on Thursday at Mar-a-Lago, his West Palm Beach resort. On Tuesday afternoon Hillary Clinton was joined by her husband Bill and former vice president Al Gore to campaign in the state. “If we win Florida, there’s no way my opponent can win. That’s why he’s gonna be in Florida today. He knows that,” Clinton said during her rally.

The influx of Puerto Ricans to Florida is not an entirely new phenomenon. This attracted some notice during the 2008 and 2012 presidential elections, when Barack Obama was a candidate. (He carried the state by small margins in both elections.) Yet the number of new arrivals, and new voters, has never been high enough to effect change — until now.

The bulk of these Puerto Rican migrants are putting down roots in a section of central Florida known as the Interstate 4 Corridor. Although they're relocating for various reasons, the majority of Puerto Ricans are hoping to escape the insurmountable debt building up on their island.

Puerto Ricans have a striking similarity with other little-noticed minority groups, such as Native Americans: No one cares about them. As a Puerto Rican myself — albeit one born on the U.S. mainland — I can see firsthand how often the island of almost 3.7 million people is overlooked.

My family touches all parts of Puerto Rico, from the wealthier parts of Dorado to the crime-ridden La Perla neighborhood of San Juan. It’s not an exaggeration to say that Puerto Rico’s turmoil is all encompassing: Earlier this month, the territory went dark during an island-wide blackout. Still, the financial crisis afflicting the island is the primary reason for natives to desert it.

A last-minute appeal to Puerto Ricans

The biggest reason for Trump and Clinton to cozy up to Puerto Ricans is, of course, securing votes. Assailed by crisis and trailing in the polls, Trump needs votes now more than ever. With more Puerto Ricans living in Florida and an extended voter-registration deadline, both candidates have good reasons to launch serious appeals to that population.

What American politicians often fail to understand is how different Puerto Rican voters are from Hispanic voters (who tend to be Democrats). And Puerto Ricans tend to be more socially conservative than Democrats overall.

Another important distinction — possibly lost on Donald Trump — is that Puerto Ricans are by definition native-born U.S. citizens (even if they’re born in Puerto Rico) and free to move wherever they want in the United States. Unlike other Hispanic newcomers, they don’t need to fight for citizenship.

Some Puerto Rican voters are in favor of creating a clearer, easier path to citizenship for immigrants. Other Puerto Ricans, however, view immigration as a vexed issue. For decades, Puerto Rico has been a popular destination for immigrants from the Dominican Republic. As a result, a long-standing rivalry exists between the two groups, with Puerto Ricans arguing that Dominicans are stealing jobs.

Sound familiar? It should, as that is the bedrock argument by conservatives against immigration to the United States. As you may have noticed, it's an opinion frequently articulated by Trump. And it's not uncommon to hear that view also expressed by some Puerto Ricans who now live stateside: After trying to escape debt in their territory, they have come to the United States in hopes of establishing businesses and flourishing; immigration, in their view, can pose an economic obstacle to success.

Still, the similarities between Puerto Ricans and other Hispanic voter groups vastly outweigh the differences.

The Center for American Progress Action Fund recently released a survey of the Florida Puerto Rican electorate. The results showed that 84 percent planned to vote in this year’s election, with 61 percent certain they would vote for Clinton, and only 12 percent supporting Trump. Still, the race for overall Latino support in Florida is closer than you might think, with Clinton holding a 24-point lead.

This survey also found that when it comes to highly contentious election issues, Florida’s Puerto Rican electorate is most concerned about the economy and jobs (33 percent), and health care (19 percent). Trump and Clinton have spent their entire campaigns catering to mainland Americans, making their stances on the economy and health care even more complicated to newly transplanted Puerto Ricans.

Health care in Puerto Rico and on the U.S. mainland

As a territory, Puerto Rico receives little financial help from the federal government and is excluded from Obamacare; it operates a publicly funded health care system. If Puerto Ricans really have the power to sway the Florida vote and therefore the election, as Clinton has claimed, the nominees should address their concerns directly.

In the coming weeks, the candidates need to put forth plans that lay out specifics of their proposals and how they benefit Puerto Rican new arrivals.

Puerto Rico’s health care system is severely underfunded, with inhabitants receiving only half the customary rate of federal health care funding. Add this to a collapsing economy and the fact that almost 18 percent of the population consists of those 65 years or older — that is, people more likely to require medical care — and the scale of the crisis is apparent.

Now that the majority of stateside Puerto Ricans can participate in the United States’ health care system, the question of what these individuals want remains. Is Obamacare with alterations the best way to go, as Clinton suggests? Or is scrapping the Affordable Care Act and starting over the right choice, as Trump proposes?

Puerto Ricans’ fears about the economy will also be difficult to alleviate. People are fleeing the island due to a growing scarcity of jobs. The unemployment rate in Puerto Rico is nearly 12 percent (down from a staggering 16 percent a few years ago), compared with the overall U.S. unemployment rate of about 5 percent.

Of the Floridian Puerto Ricans included in the Center for American Progress Action Fund survey, 29 percent had a combined household income of less than $20,000 in 2015. The results also showed that concerning jobs, most respondents (74 percent) would readily support a candidate who wanted to raise the minimum wage as much as possible.

It’s no secret that on the economy issue alone, Clinton is leagues ahead of Trump — at least to this subset of voters. Trump’s plan to grow the economy and create more jobs is completely unspecific. He has not offered a concrete proposal for how he intends to add 25 million new jobs in the next decade — and even if he did, Puerto Ricans need help now, not in 10 years. Additionally, Trump has flip-flopped on his minimum-wage stance countless times, with his latest position being to support a $10 minimum wage.

Clinton, on the other hand, has proposed a more specific route to job growth and promises to create about 10 million more jobs in her first term alone. Despite her reportedly close ties to Wall Street executives, she has offered specific plans aimed at the working class and wants to eliminate excessive taxation and cut red tape on small business. She also has supported a $12 minimum wage, which is well below Sen. Bernie Sanders’ $15 proposal but better than Trump’s.

Then there's also the growing problem of Puerto Rico’s debt crisis. True, the only Puerto Ricans who will be voting on Nov. 8 are those living on the mainland. One of the many peculiar aspects of Puerto Rico's status is that residents of the island cannot vote in national elections. That doesn’t mean the candidates’ reactions to the island’s financial issues are unimportant. In fact, the same Center for American Progress Action Fund survey found that 11 percent of the respondents considered their homeland’s debt crisis as the top election issue.

Puerto Rico has more than $70 billion in public debt right now — that’s $20,000 per resident — and July was the fourth time the island's government defaulted on its bond payments. A bipartisan effort was launched this past summer to help the territory by establishing a fiscal oversight board, although Puerto Ricans’ reception to the bill, known as the Puerto Rico Oversight, Management, and Economic Stability Act or PROMESA, was mixed. Still, President Obama signed it into law after Puerto Rico’s most recent default, and Clinton has expressed her support.

Again, it seems that Clinton wins support from Puerto Rican voters on this issue, even if some have viewed PROMESA unfavorably (a portion of the population compared it to financial colonialism). Trump has openly said he won’t help — the equivalent of “screw you” to Puerto Rican ears. Trump has said the island has “far, far too much debt” and at one point told CNN’s Wolf Blitzer that he “wouldn’t bail them out.”

Last week’s news cycle was dominated by a growing number of sexual-assault allegations made against Trump. His daughter Ivanka visited Pennsylvania to do some damage control with women voters, but Trump still needs all the help he can get. If Clinton’s prediction that scoring the Florida vote will be the key to winning this election is correct — and I think it is — then Trump would do well to step up his game among Puerto Ricans.

For reasons I have outlined, Republicans might be able to poach some of these voters with the right approach, even if this particular Republican nominee almost certainly won't.