"Hillary needs to be taken out": Donald Trump's violent rhetoric is taking a real form at his campaign rallies 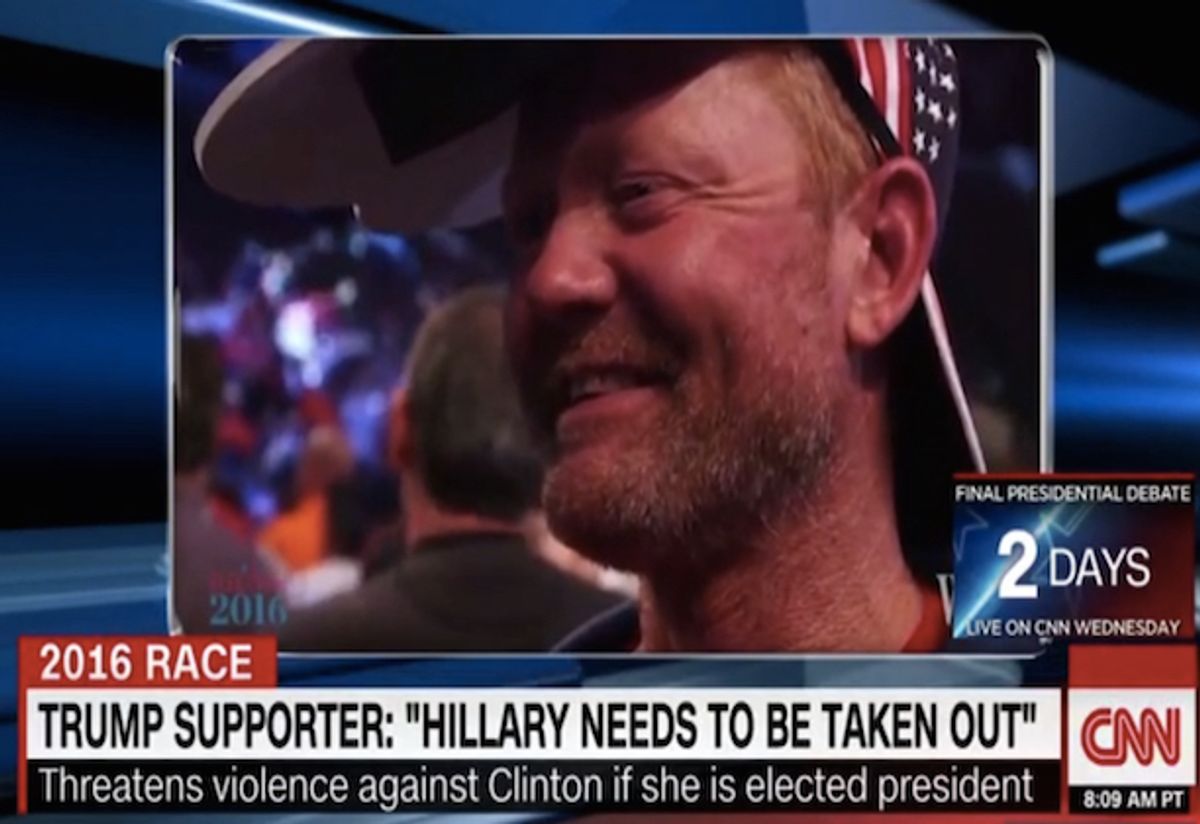 Amid Republican presidential nominee Donald Trump's increasingly desperate attempts to stir up mass hysteria over the upcoming election results, there is mounting evidence that his heated rhetoric has spurred his most vile supporters to engage in increasingly deplorable behavior.

News organizations have been finding that Trump supporters are becoming unglued and threatening violence against Hillary Clinton should she win the presidency in November.

A couple of newspapers spoke with some of Trump's supporters in Cincinnati attending a rally who believe his claims of widespread fraud.

"Some wore shirts with slogans like '[Expletive] Your Feelings' or, in reference to the female Democratic nominee, 'Trump that Bitch.' Others had buckets of popcorn, ready for the show. When the media entourage entered, thousands erupted in boos," The Boston Globe reported over the weekend.

“If she’s in office, I hope we can start a coup. She should be in prison or shot. That’s how I feel about it,” Dan Bowman, a 50-year-old contractor, said about Democratic nominee Hillary Clinton to The Boston Globe. “We’re going to have a revolution and take them out of office if that’s what it takes. There’s going to be a lot of bloodshed. But that’s what it’s going to take. . . . I would do whatever I can for my country.”

Bowman told The Wall Street Journal on Thursday, “I feel like Hillary needs to be taken out. If she gets in the government, I’ll do everything in my power to take her out of power."

“If I have to be a patriot, I will,” he added, before avoiding questions about whether he was threatening Clinton directly.

“I don’t know. Is it?” Bowman responded when asked if his comment represented a real threat to Clinton's life.

Trump supporter at rally says "Hillary needs to be taken out" Watch: https://t.co/vwicB9i7vo

A spokesperson for the U.S Secret Service told The Independent that the agency became aware of Bowman's threat on Monday and agents are currently "looking into it."

Bowman's comments to the Journal came a day before three members of a small militia group were charged with conspiring to use a weapon of mass destruction against Muslims and immigrants in Kansas. On Friday, the Kansas men were charged with planning to blow up truck bombs around an apartment complex that houses 120 Somali residents, which includes one apartment that serves as a mosque. CBS News reported that the men also discussed attacking area churches that helped settle refugees and helped them get jobs at Tyson Foods, a meat packing company that has drawn a diverse immigrant population to the area.

According to the criminal complaints against Curtis Wayne Allen, 49; Patrick Eugene Stein, 47; and Gavin Wayne Wright, 49, the men were part of “the Crusaders,” a militia group whose members espouse anti-government, anti-Muslim, anti-immigrant extremist and "sovereign citizen" beliefs.

And at a recent Palm Beach, Florida, Trump rally, CNN reporter Jim Acosta found a poster that read “MEDIA,” featuring a swastika that was left on a table in the press pen:

For its part, the Trump campaign has released a statement distancing itself from threats of violence by supporters. "We reject violence in any form and will not allow it to be a part of our campaign," the campaign said in a statement. "Those who hold unacceptable views do not represent the millions of Americans who are tired of the rigged Washington system that will make their voices heard at the ballot box on November 8."

A Morning Consult poll released on Monday found that 73 percent of Republicans voters think the election will be stolen from Trump, as the GOP nominee set off another tweetstorm attempting to undermine the integrity of the electoral process as "rigged."