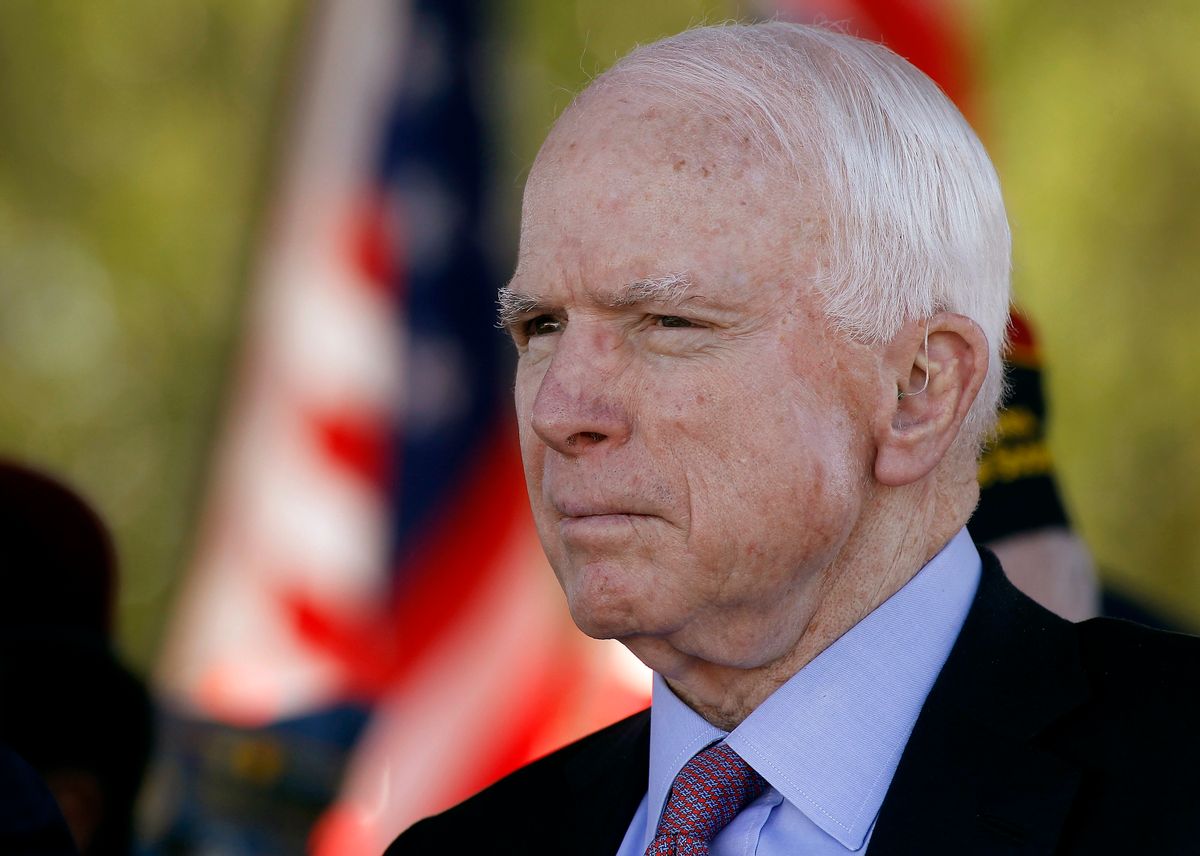 FILE - In this Monday, May 30, 2016, Sen. John McCain, R-Ariz, looks on during a Phoenix Memorial Day Ceremony at the National Memorial Cemetery of Arizona in Phoenix. Eight years after stumping across the nation as the Republican Party's presidential candidate, McCain is back on the campaign trail in his home state as he faces a primary challenge and a strong Democratic opponent in the general election. (AP Photo/Ralph Freso, File) (AP)
--

Sen. John McCain is sure that if Democratic presidential nominee Hillary Clinton wins, the Senate will continue to be an obstructionist mess.

"I promise you that we will be united against any Supreme Court nominee that Hillary Clinton, if she were president, would put up," McCain told WPHT in Philadelphia. "I promise you. This is where we need the majority."

McCain said he didn't know if Trump would be the advocate conservative voters need to fill the late Justice Antonin Scalia’s empty seat on the court. “I don’t know because I hear [Trump] saying a lot of different things,” McCain said.

For many conservatives, Trump’s only saving grace this election is the prospect that as president he would replace Scalia with an equally conservative justice in order to bring balance to the court.

Since May Trump has prepared a list of 21 potential justices to the delight of GOP lawmakers who have used the empty seat on the court as motivation for Republicans to get out and vote.

In an interview with Fox News’ Brit Hume last week, former House speaker John Boehner said the next Supreme Court nomination should be the No. 1 priority for voters.

“The legislative process, the political process is at a standstill and will be regardless of who wins," Boehner said. "The only thing that really matters over the next four years or eight years is who is going to appoint the next Supreme Court nominees.”

Trump, too, has used the looming Supreme Court appointment as a rallying cry during his campaign events, promising his base that he would choose a conservative justice in Scalia's mold.

Reports have suggested that Trump could potentially nominate Peter Thiel for the empty seat, even though the venture capitalist and attorney has denied having any interest in the job.