Donald Trump's time machine: What decade does the GOP nominee want to return to, anyway? 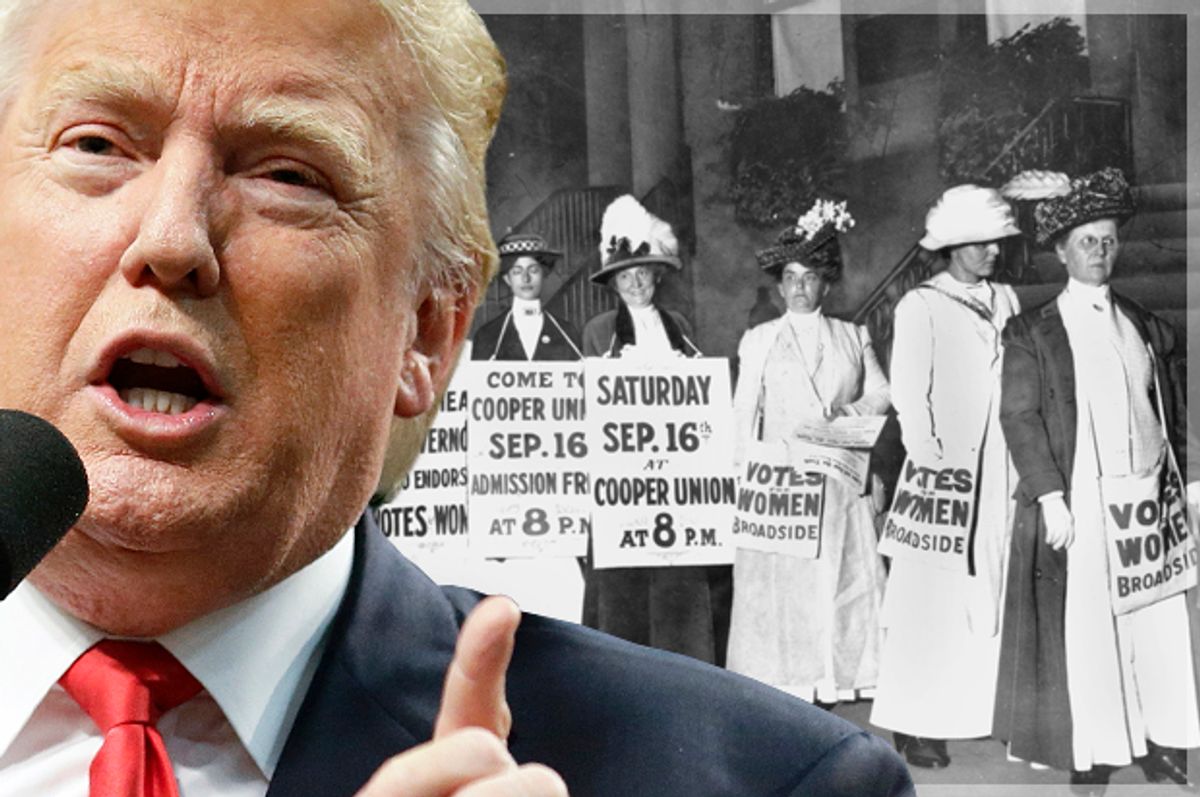 Donald Trump’s path to victory in the 2016 presidential election is increasingly narrow. Trump is increasingly unpopular with a huge swath of American voters. White men are his redoubt of support. Statistician and pundit Nate Silver highlighted this on his website FiveThirtyEight. He wrote:

If men were the only voters, conversely, we’d have to subtract 10 points from Clinton’s current margin in every state — which would yield an awfully red map. Trump would win everything that could plausibly be called a swing state, with Clinton hanging on only to the West Coast, parts of the Northeast, Illinois and New Mexico. That would yield 350 electoral votes for Trump to 188 for Clinton. . . .  But it seems fair to say that, if Trump loses the election, it will be because women voted against him.

Donald Trump’s son was enthusiastic about Trump’s support among men and an alternate reality where only men could vote for president of the United States. By now you know that Trump’s basket of human deplorables responded on cue with a social-media campaign advocating that the 19th Amendment to the U.S. Constitution be repealed.

This is not a harmless online meme or joke. It is also not political satire. “#RepealThe19th” is another insight into the political vision and worldview that animates Trump and the millions of Republicans and other voters who have flocked to his banner.

Today’s Republican Party is not “conservative." Conservatism is prefaced on respect for standing norms and priors, existing political and cultural institutions and is weary of sudden social change. Since the Clinton administration and through to the age of Obama, the Republican Party has become increasingly radical — disregarding the consensus politics and respect for political precedent and tradition that has guided the modern two-party political system in the United States for more than 100 years.

The Republican Party is also revanchist. Its leaders and base are fighting to return the United States to some of the darkest parts of our past. Donald Trump and his movement are the extreme outcome of this yearning: Their slogan “Make America Great Again” is in many ways a war on progress and the 21st century.

Among the ways in which they seek to take us back in time are the following:

Trump loyalists are moving to revoke women's right to vote, which was granted with the passing of the 19th Amendment in 1920.

Donald Trump talks about an urban hellscape, “law and order politics” and the “silent majority,” parroting anti-black Nixonian rhetoric from the 1960s and 1970s.

Donald Trump wants to create a gestapo-like force that will immediately and forcibly deport more than 10 million “illegal immigrants” on the day he takes over the White House. This is the infamous “Operation Wetback” from 1954 reincarnated for the year 2016.

Trump wants to end birthright citizenship. This would require changing the Constitution and overturning a legal precedent that was set by the Supreme Court in 1898.

Trump and other Republicans want to take away a woman’s right to reproductive freedom. The landmark Supreme Court case Roe v. Wade was decided in 1973.

And Trump is encouraging his supporters to monitor voting to prevent “fraud” in “urban areas” (i.e. by blacks and Hispanics) and the presidential election from being “stolen." The Voting and Civil Rights Acts of 1965 and 1964 were created to end American apartheid and the racial terrorism that white Americans across the South and elsewhere used to prevent blacks from voting for almost 100 years.

This is part of a broader strategy whereby the Republican Party — of which Donald Trump is now the de facto leader — has been rolling back the won-in-blood and lives gains of the civil rights movement to enact laws that prevent blacks, students, young people the poor, elderly, and other groups from voting.

Trump has also promised to create a national “stop-and-frisk” program to “fight crime” that will target blacks and Latinos for harassment and arrest by the police. Stop-and-frisk is a violation of civil rights laws and human dignity. These policies are also racially discriminatory and do not lower crime. Trump’s Terrordome is a 21st-century version of the post-Reconstruction-era white supremacist Black Codes that led to Jim and Jane Crow.

Indeed Trump is not alone in his desire to return America to a time before the Civil War. In response to the election of President Barack Obama, Republican political and media elites have used antebellum language such as “secession” and “nullification." They have also at times threatened a second American Civil War to depose Obama, a man they consider to be a dangerous African-American usurper in their White House.

Trump and the Republican Party have promised their voters and public to take America on a time machine that does not exist. This sentiment echoes Andrew McGills’s recent Atlantic essay, in which he observed:

So Trump has found a following among people who stayed home. One theory would suggest his supporters are sheltered: They haven’t encountered the world beyond what they knew growing up, and their support for Trump is potentially rooted in prejudice. You could also say these people are more in touch with their communities and are willing to dismiss Trump’s more incendiary remarks because he speaks to their news and those of their neighbors. Or both could be true. Either way, it’s a telling correlation. Hillary Clinton may have the hearts of the people who moved away. But way back home, they’re voting for Trump.

Trump’s voters — and Republicans more generally — want a democracy where rights and privileges and opportunities are reserved for people like them and not anyone else. These people are also terrified of a cosmopolitan and racially diverse world. Consequently, they embrace nostalgia for the past and a time when white privilege was the formal rule of the land.

Changing demographics, technology, generational replacement and evolving norms and values have ensured it so that America is dead. Donald Trump and the Republican Party were apparently not invited to the funeral. He and his basket of human deplorables worship zombie political ideas because they mistakenly believe that they can return to a time when those ideas still have life.