While Donald Trump talks of a “rigged election,” Mike Pence may suppress the votes of nearly 50,000 African-Americans

Is Mike Pence using law enforcement in his state to gin up false fears of voter fraud? 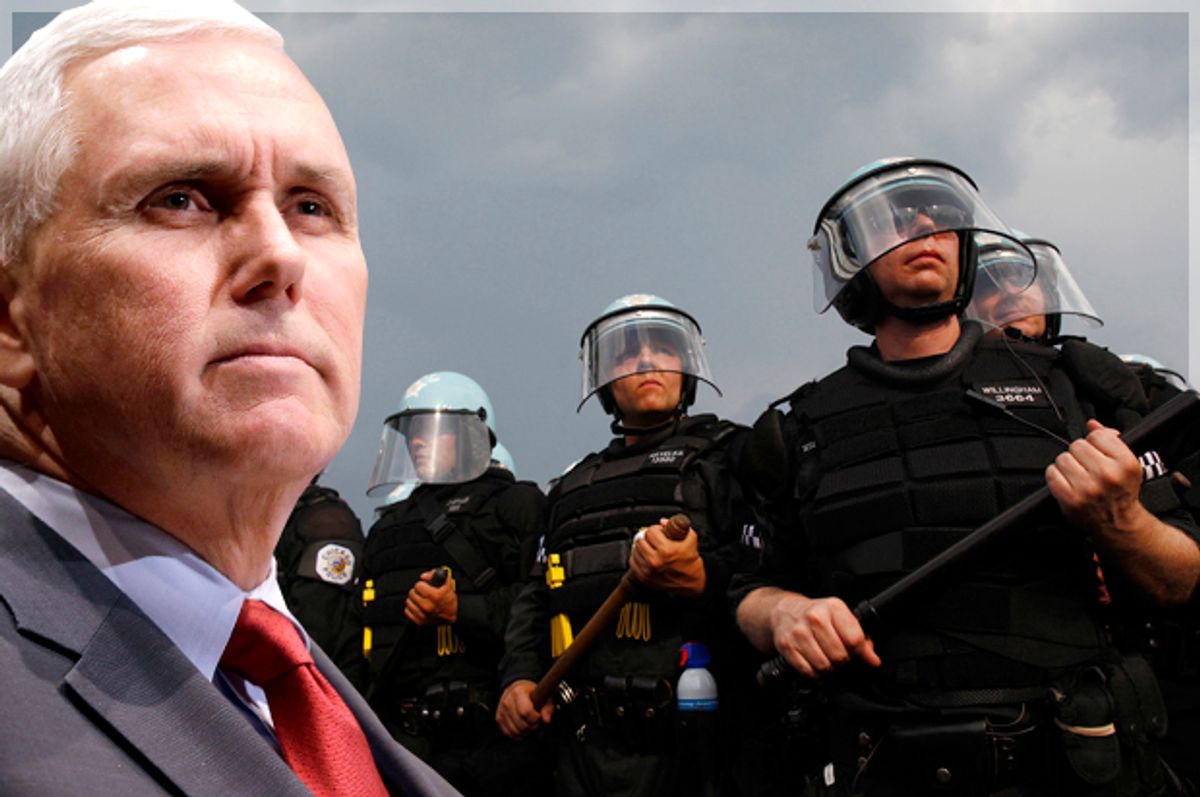 Republican vice presidential nominee Mike Pence is being applauded for publicly rebuking his running mate Donald Trump’s repeated claims of a “rigged” election, yet what's gone under the radar is that Indiana governor may be allowing voter suppression in his own state.

On Sunday when Pence appeared on CBS’ “Face the Nation,” host John Dickerson asked him about Trump’s claims that the election is “absolutely rigged” and his calls for supporters to closely monitor polling places for voter fraud. "I don't think any American should ever attempt to make any other American nervous" when voting, Pence responded.

Dickerson did not question Pence, however, about why Indiana State Police recently seized 45,000 voter-registration applications, most of them from black voters. So while viewers may have given Pence credit for seeming relatively reasonable compared with his running mate, alleged voter suppression in his own backyard went largely unnoticed amid the hoopla over Trump’s hysterical claims.

Indiana's Secretary of State Connie Lawson, a key sponsor of her state's 2005 voter ID law (upheld by the Supreme Court), in September announced an investigation of the Indiana Voter Registration Project. On Oct. 4, state police detectives served a search warrant on the project’s Indianapolis office. The results of the search have not been released, and the affidavit and search warrant will remain sealed for 30 days, according to the Indy Star.

The D.C.-based Patriot Majority USA, which sponsored the Indiana Voter Registration Project and similar efforts to register communities of color in 13 other states, said the raid is a Republican-led effort to suppress turnout ahead of the presidential election. (Patriot Majority USA at one point this year had been affiliated with a PAC that supports Democrats in U.S. Senate races but not during this part of the election cycle.)

State police investigators said in a statement, the false information could be a "combination of made up names and made up addresses, real names with made up or incorrect addresses and false dates of births with real names as well as combinations of all these examples.”

But Craig Varoga, president of Patriot Majority USA, said in a email, "In Indiana, they took the forms . .  . mischaracterized ten omissions as fraud and then brought in partisan Republicans from the State Police, who launched a partisan witch hunt designed to suppress the voting rights of tens of thousands of African Americans in Indiana."

Vagora told Salon via email that he believes Pence is using the state police to suppress the votes of Indiana voters and violate their constitutional rights. "Essentially, the state police are using our quality-control methods to disseminate false charges of fraud. If that’s not a partisan abuse of a law-enforcement agency, nothing is," Vagora said. According to a training manual, Indiana Voter Registration Project canvassers are not compensated by the number of registration form collected but rather with an hourly wage.

And Varoga said that while many of the 45,000 voter applications had been submitted to the county clerks by the day of the October raid by State Police, "they are in jeopardy because officials might not process them in time for the November 8th election, due to the false allegations of fraud by Pence, the police and Connie Lawson."

Varoga said in a statement that Indiana State Police tried to intimidate the Indiana Voter Registration Project in several ways. "Investigators seized personal cell phones not related to the investigation; prohibited videotaping of investigators' activities in the IVRP's offices; [and] prevented IVRP staff from contacting in-state legal counsel, and then demanded that a state trooper be present if staff members called an attorney, a clear violation of attorney-client privilege."

According to Varoga, the Republican state trooper leading the Indiana Voter Registration Project investigation is eyeing a run for sheriff in one Indiana county and personally went to the homes of African-American canvassers "in an effort to force them into taking polygraph exams and making false confessions."

In a Saturday statement, Pence spokesman Matt Lloyd called the voter-suppression allegations "beyond absurd." Lloyd said, "The Indiana State Police has uncovered strong evidence of voter fraud by Patriot Majority USA." He added, "Among Governor Pence’s top priorities is ensuring the integrity of the election and that every single Hoosier vote counts. He has full confidence in the Indiana State Police investigation to achieve this goal."

Pence did tout the investigation on the campaign trail last week in Iowa: “In the state of Indiana, we have a pretty vigorous investigation into voter fraud going on right now." Added Pence: "And I encourage you here in Iowa, let’s be sure that our state officials are upholding the principle of ‘one person, one vote’ and the best antidote to that is to be involved in the election process. If you are concerned about voter integrity and you haven’t signed up to be a poll watcher, to volunteer at a polling place to be a part of the integrity of that process, then you need to do it.”