Donald Trump, a threat the Founding Fathers foresaw: He proves the need for the Electoral College — and is the best case for superdelegates

Like superdelegates, the electoral college is a bulwark against the dangers of Trump — still want to abolish them? 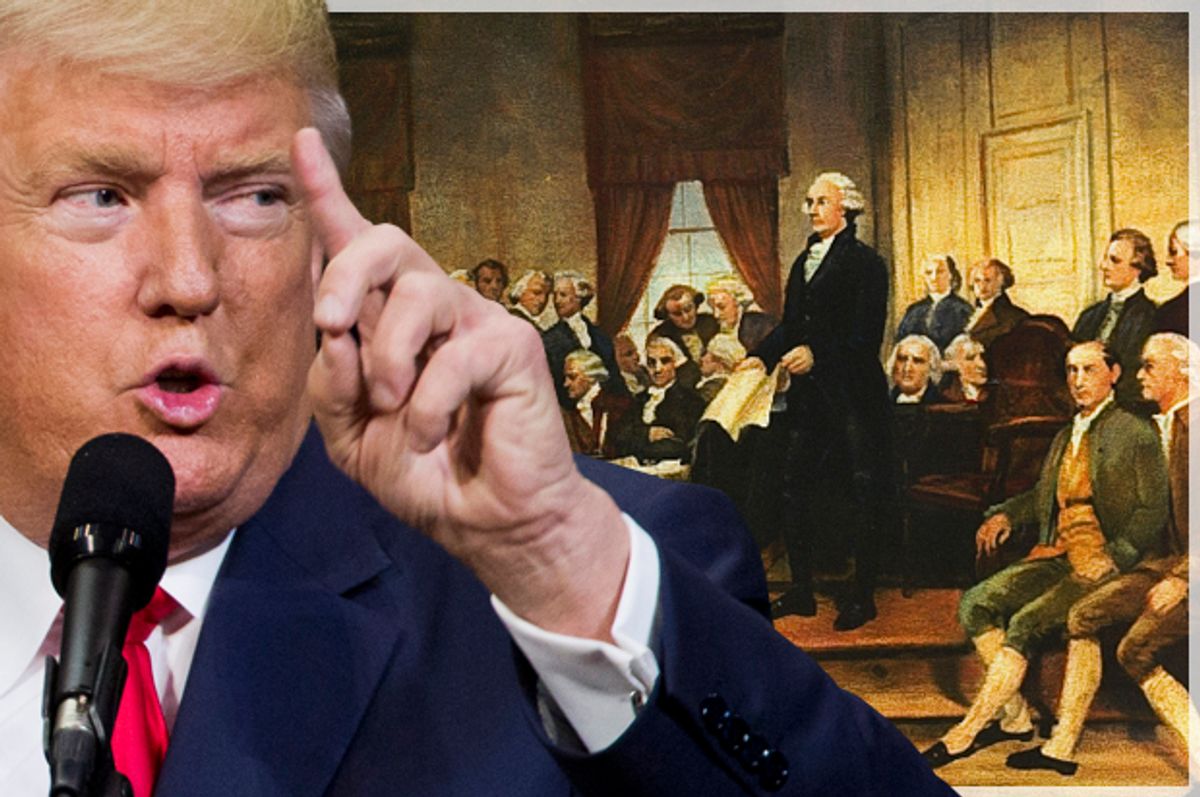 It seems like a million years ago when Democratic supporters of Bernie Sanders and Hillary Clinton were furiously debating the merits of the superdelegate system. It happens almost every time and it never gets less stupid.

While defending superdelegates is never a popular position to take on social media, the value of the system and its distant cousin, the Electoral College, could not be more obvious during this current general election. All we need to do is to observe the shrieking, wild-eyed, uncorked flailing that's taking place among supporters of Donald Trump, both online and off, and the need for firewalls against ignorant populism becomes abundantly self-evident.

As much as we like to think of ourselves as wise and rational people, we too often require protection from ourselves. Everything from traffic laws to food labels and term limits are designed as strictures against the human penchant for self-destruction. Indeed, the Constitution and the system of government it outlines is built upon checking the worst instincts of human nature — especially the unquenchable appetite for total power. The framers therefore constructed a system in which every structure is checked and balanced with the sole purpose of thwarting too much centralized power and fostering stability in the face of popular whimsy.

We'll never know if James Madison and the authors of the Constitution were prescient enough to forecast a Trump candidacy, but we know they were deeply concerned about the hazards of direct democracy. Hence the establishment of the Electoral College as a bulwark against destabilizing figures with the charisma to easily manipulate low-information voters.

Alexander Hamilton wrote in Federalist No. 68 about the dangers of directly electing presidential candidates who possess "talents for low intrigue, and the little arts of popularity." Sounds a lot like Trump.

So, the framers adapted the Roman "collegium electorum" into a system in which voters choose slates of electors, appointed for each party and equal to the respective state's congressional representation, rather than directly voting for presidential candidates.

Technically, about half of all electors are required by law or party rules to cast their ballots for the winner of their state's popular vote. Theoretically, though, electors can break ranks and vote for the other candidate. The hope is that electors won't have to deny the popular vote to stop an existentially dangerous candidate, and they never have. But it's nice to know there's a method for doing so — in case of a maniac's rise to power.

Likewise, the Democratic Party, beginning in 1984, chose to implement a primary firewall, the superdelegate system, as a means of blocking similarly frivolous candidates from winning the nomination — unqualified or downright scandalous candidates who might look great to radicals and extremists but who would be a disaster in the general election.

Together, both systems provide fail-safe mechanisms that, while seldom if ever used, offer insurance policies against Trump-like figures or worse, who prey upon our natural biases and impulsiveness.

Trump may not know it, but he's done the founding fathers a service by successfully vindicated the existence of both institutions. (I'd bet a month's salary that he doesn't even know how the Electoral College works.) Anyway, the Republican Party, if it's at all interested in blocking another Trump-ish fiasco, would do well to set up its own superdelegate system, even if it never has to use it.

But it's fair to suggest that many Republicans wish one was already in place. Superdelegates, as controversial as they are, would have potentially thwarted Trump's nomination and, with it, many bleeding ulcers. More important, it would shield the rest of us from a similarly destabilizing character whose entire strategy is built upon pandering and ridiculousness. I'm not sure the GOP is self-aware or self-critical enough to appoint its own superdelegates, but the rest of the world would be more than grateful for it. Believe me.

We never thought it could happen like this, but Trump has managed to climb to the very brink of acquiring absolute power, propelled by upward of the 40 percent of American voters who have been deceived by appeals to their worst human instincts and the lure of populist bromides, delivered to them with the mastery of a professional television celebrity.

While Trump's no longer favored to win, it doesn't matter. He's already thoroughly beclowned American democracy by his very existence as the GOP nominee, appearing on television every day with his ludicrous conspiracy theories, his childish name-calling and his disgustingly misogynistic gropings.

Collectively, his 40 percent support ought to be enough to trigger a rethinking of the GOP's primary process, if for no other reason than to re-marginalize the "poorly educated" voters whose racism and formerly unfocused rage have led them to blindly pledge their loyalty to this reality-show clown, this Saturday-morning-cartoon villain, and designate him as presidential material.

To further illustrate why the framers were wise to set up a check on mob rule, there's this:

The man in the above video is fairly indicative of the automatons who have elevated Trump to this point. The very fact that he thinks "taking out" Hillary Clinton is his "patriotic" duty proves that perhaps it's a smart idea to create a buffer between him and directly choosing presidential candidates. Oh, and he's far from being the only one.

Even though I disagree with Trump on every issue, my chief objection isn't simply about policy. My visceral grievances with Trump have more to do with his lack of character, his total lack of qualifications and his terrifying disrespect for the rules and traditions of American presidential politics — the latter being the wafer-thin fabric that holds this entire American experiment together, making his complete disregard for the rules, written and unwritten, the greatest threat to the American system.

If events go horribly awry and the election swings in his direction at the 11th hour, the fear of a Trump presidency isn't strictly limited to his proposal for building a wall or, I don't know, nominating Omarosa to the Supreme Court. The real fear has to do with the millions of impulsive, knee-jerk things that we can't even begin to predict. And the next Trump will be even more devious about his or her demagoguery.

There will surely be more Trumps, knowing that the style of the current Republican nominee has led him to a point in which he has occasionally flirted within the margin of error more than once. "Trumpism" is on the loose now, and even a humiliating loss on Nov. 8 won't make it go away. And the next purveyor of it will likely learn from Trump's mistakes and improve his or her chances. Therefore it's incumbent upon the GOP to make sure it puts down this white nationalist monster it's created by making sure another Trump doesn't end up at large. Suffice to say, I'm not holding my breath.

Ultimately, if you've been skeptical or downright opposed to both superdelegates and the Electoral College, look no further than Trump and tell us how else the next one will be stopped without either, knowing that there are tens of millions of American voters who are absolutely cool with the idea of a President Trump.