Donald Trump is destroying America's sex life: Why his hateful orange mug has wrecked our libido

It's tough to get in the mood for love when the election talk is all about sexual violence, fear and hatred 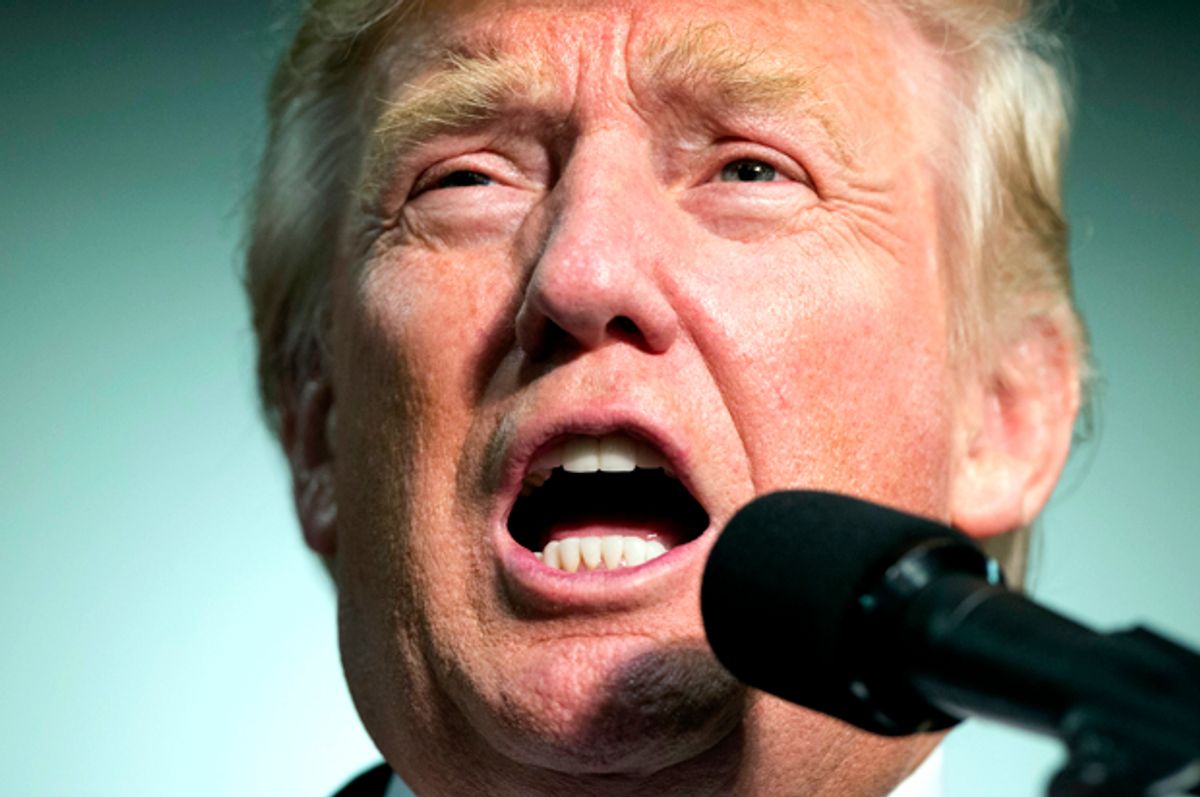 Donald Trump is a threat to America on almost every level: He threatens our democratic systems, our progress towards racial and gender equality, our tradition of free speech, our national security and our sense of basic decency.

It's not just that seeing Trump's squinty sneer and fish mouth every time you turn on your TV is an anti-aphrodisiac. In conversations and online exchanges with Americans about how the election is affecting their sex lives, I found that many people are stressed out, especially with regards to Trump's habit of body shaming and bragging about sexual assault ‾ and it's affecting their sex lives.

For decades, Republicans have tried and failed, through abstinence-only education and restrictions on reproductive rights, to get the public to screw less. But now, in the personage of Donald Trump, they may have finally found a way to convince Americans to keep their pants on.

"I've basically found myself totally unable to get in the mood at all, which is becoming a little bit of a strain," said Anne, a young woman who recently got engaged. "My fiancé's never been anything but respectful of a 'no,' but the last thing I want to do is tell him why I haven't been in the mood lately. I can't think of anything more insulting than, 'Well, honey, frankly I'm thinking of Donald Trump right now.'"

Anne noted that the person who sexually assaulted her when she was young had done something similar to what Trump was bragging about and "hearing dozens of commentators constantly arguing about whether it still counts as sexual assault" was adding to her anxiety.

"It's that the constant conversation about Trump grabbing women and then dismissing them as being too ugly to assault, and the will-they-or-won't-they drama of whether major Republican figures will reject or denounce him, just makes me acutely feel my lack of value as a woman," agreed Sophia, who lives in California.

At first, wrote Dette, a married Gen Xer, "my reaction was just horrified/unsurprised/even glad his true colors were showing." But soon she was "remembering a zillion times I had been subjected to or witnessed sexually assaultive behavior," she added.

"I became aware that thinking about sex with my husband had become anxiety-producing and depressing," she said.

Dette decided to tell her husband, "I need you to wait until I come on to you or tell you I'm ready."

"I have been assaulted before," wrote Jessica, age 32. The discussion about Trump's alleged sexual assaults was "unnerving," she said, "because it was sad and it was EVERYWHERE."

During sex with her husband, she continued, she suddenly felt uncomfortable "because of his hand being near my vagina and my thoughts immediately going towards the hands of abusive, creepy men reaching there."

She pushed through but is "not happy about this coming up in my mind when my vagina gets touched."

Allison, a 28-year-old New Yorker, wrote, "I have zero drive to have sex, or even go out and attempt to meet people — my disgust towards men has heightened tenfold."

She added, "With the amount of energy I use just getting through each day I don’t have any left to attempt to find a partner" and noted that she has deleted all her dating apps and "won’t be downloading them again for quite some time."

The pressure is affecting men, as well.

"I've literally felt compelled to give her warning when I'm about to put my hands on her," said Tom, who has been with his wife for 31 years.

While he and his wife laugh about the "touch warnings," Tom said all of this has "made me think about what I do with my hands," even though his wife hasn't modified her way of expressing affection.

"All the talk of sexual predation is just one of a million things that keeps us on edge and waking up in the middle of the night," wrote Jim of North Carolina about his partner and himself.

"I just haven't felt like myself lately. She literally came home in tears the other day over all the nasty things Trump supporters are saying," he added, saying, "I try my best to be there for her but I just can't escape the worry that nothing I can do could possibly be enough."

"We end up talking about Trump before every sexual encounter," said Ben from New Jersey about his exchanges with his partner. "She's just too anxious about the possibility he will be elected," he explained, and so they end up talking through the polling analysis before they can relax enough to focus on sex.

Not everyone is finding all this election stress to be a libido killer, however.

"The night of the day 'Pussyghazi' hit (thanks, Sam Bee)," said Emily, 46, "I could NOT relax. It was like my nerves were popping corn inside my body."

So she turned to her husband and asked if he wanted to have sex. He was surprised and she replied, "I know, it’s all gross, but sex is the only thing I can think of that’ll calm me down."

Emily said, "I was reminded that even though I want to burn everything with fire, sex and absurdity give me hope."

Not that there's anything wrong with losing all desire to bone every time Trump's sneering voice comes piping over the TV speakers. But for some of the people I spoke with, the hope that Hillary Clinton will win in November and make Trump's mug disappear from the news gave them hope.

"I don't think it is A THING, I think it's just temporary," Jessica said, noting that she'll "probably wait until after the election" to tell her husband about her struggles, just so he doesn't worry too much about it.

"I struggle because a lot of the things I do to make myself feel 'sexy' — shave my legs, do my hair, wear makeup, dress up, etc. — are things that reinforce my status as a woman whose worth is based on how attractive she is, which makes me feel like a garbage human again," said Sophia. "So for now I'm just trying to talk it out and wait it out."

"Hopefully I can get some electoral silence after the damn election," she added.

All of which is to say, Trojan better be ready for the big surge in condom sales on the night of Nov. 8, as soon as Pennsylvania is called for Clinton.