Donald Trump is warning of election fraud, but GOP officials oversee the process in most battleground states 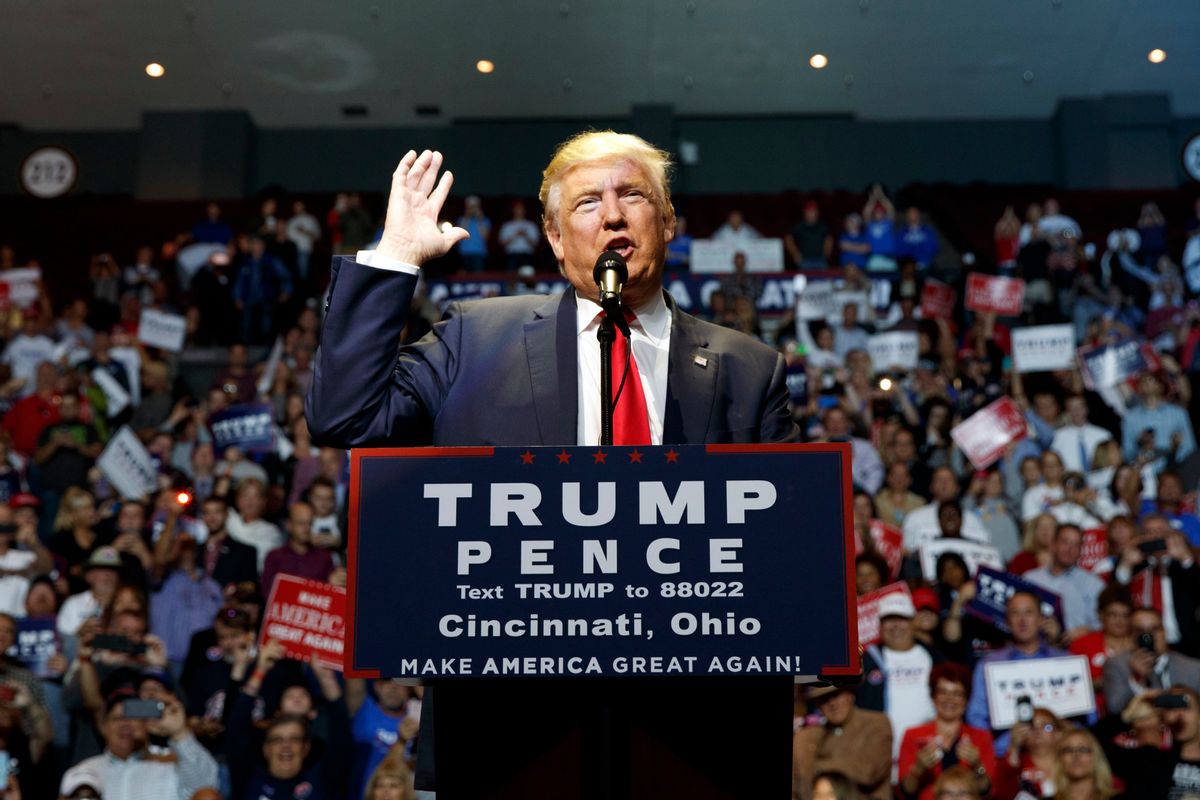 FILE - In this Oct. 13, 2015 file photo, Republican presidential candidate Donald Trump speaks during a campaign rally in Cincinnati, Ohio. There’s nothing like a presidential campaign to shine a bright light into the nooks, crannies and back alleys of a candidate’s life. And there’s nothing like Donald Trump in the annals of U.S. politics. (AP Photo/ Evan Vucci, File) (AP)
--

While Republican congressional leaders have failed to disavow Trump's dangerous complaints of a "rigged" election, Republicans who oversee the voting process in several battleground states have loudly rebuked his comments for setting a dangerous precedent.

“Donald Trump has been tweeting about elections being rigged, but he offers no evidence of such,” Colorado Secretary of State Wayne Williams, a Republican, said in a statement to Denver's KMGH-TV on Monday.

“He may have heard reports of it, but we need facts. And right now, there are no facts that support his claims,” Husted told NPR Tuesday. "I want to reassure Donald Trump as a Republican that [large-scale fraud] is not happening across the country.”

[T]he idea of widespread voter fraud would require some systemic problem in our system, and so if there's a systemic problem, please identify it. Don't just make an allegation on Twitter. Tell me, tell the secretaries of state around the country what the problem is so that we can fix it. But right now we're not aware of any systemic problems in our voting system.

And while Trump supporter Alabama Senator Jeff Sessions, a member of the Senate Judiciary Committee, recently told a crowd at a Trump rally in New Hampshire that “they are attempting to rig this election,” as the Los Angeles Times notes, most battleground state elections are actually controlled by Republicans:

Washington Secretary of State Kim Wyman, the only elected Republican state official on the West Coast, said altering results would require “a conspiracy of such grand scale that I think we would have much bigger problems than whether this election is rigged.”

“It’s irresponsible for a candidate to be casting doubt on the election process and just making these sweeping statements that the election is rigged already and that the outcome is predetermined,” Wyman told the Seattle Times Monday.

Republican Arizona Secretary of State Michele Reagan was forced to reassure voters on Monday that is "nearly impossible" for the state's election process to be hacked because the state’s vote tabulation system isn’t online.

"This state has a pretty darn good track record, and I really resent anybody trying to blemish it,” Pate told reporters Monday. “They’re not demonstrating there’s any proof that there’s these issues. What they’re doing is trying to distract, in my opinion, from what the real election issues are. Voting is far too important.”

"As Georgia’s chief elections official, I have worked tirelessly to ensure Georgians have safe, accessible and fair elections in our state,” the red state's Republican Secretary of State Brian Kemp recently told the Atlanta Journal-Constitution.

Tennessee Secretary of State Tre Hargett, appointed by the state's majority-Republican Assembly, told reporters Monday that "anything that causes people to have less confidence in being able to go vote, I frown upon regardless of what party that comes from.”

As voting begins in states across the country, it is certainly unprecedented that Republican elections officials are working to maintain voters’ confidence in the system as the Republican presidential nominee works tirelessly to undermine any existing trust.  So far, it looks like Trump is winning the Republican civil war over a possible "rigged" election.

A Morning Consult poll released on Monday found that 73 percent of Republicans voters think the election will be stolen from Trump, as the GOP nominee set off another tweetstorm attempting to undermine the integrity of the electoral process as “rigged.”