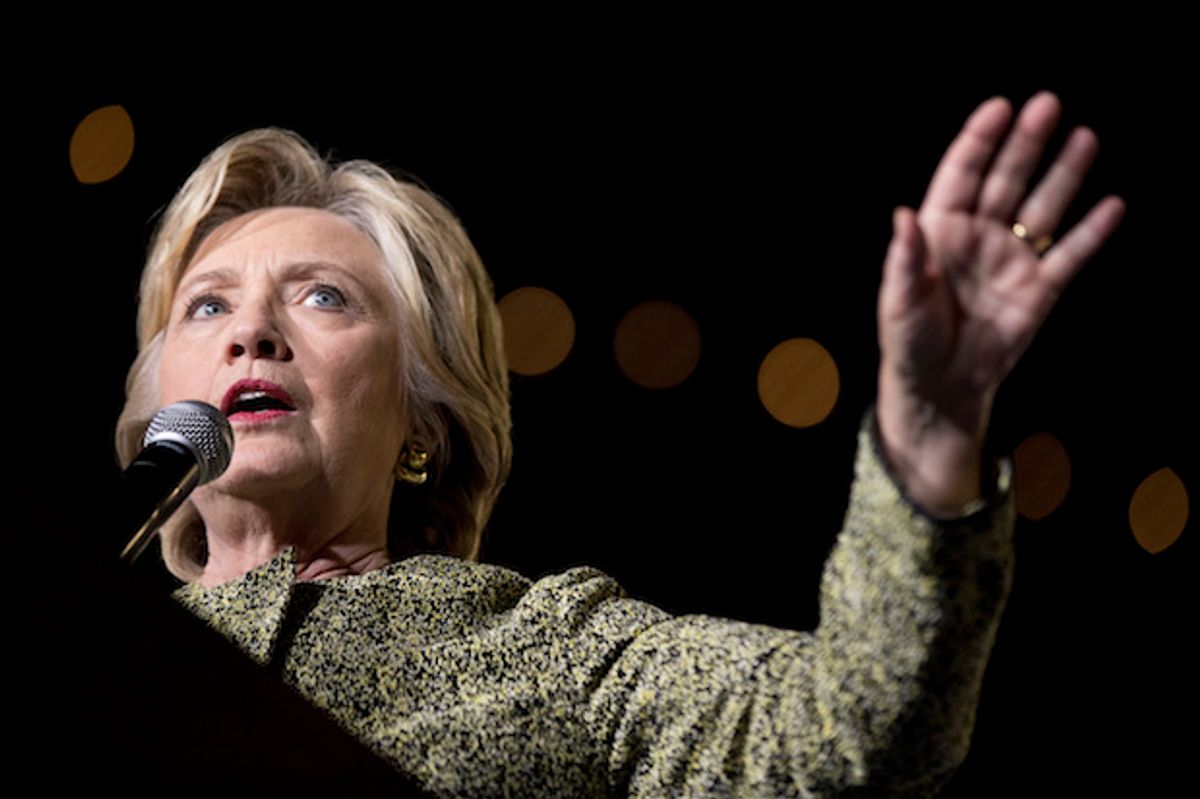 Democratic presidential candidate Hillary Clinton condemned the "radical environmentalists" behind Bernie Sanders' campaign, indicating they should "get a life," according to a transcript of her comments at a September 2015 meeting with a construction union.

Clinton also reaffirmed her support for fracking and pipelines and made it clear that her opposition to the Keystone XL pipeline was a calculated political move.

The transcript was included in an email to Clinton campaign chair John Podesta released this week in a trove of documents by the whistleblowing journalism organization WikiLeaks.

"You know from my perspective, this is just one of these issues," Clinton said of the Keystone XL pipeline at the meeting. "It's symbolic and it's not going to go away."

"They're all hanging on to it," she continued. "So you know Bernie Sanders is getting lots of support from the most radical environmentalists because he's out there every day bashing the Keystone pipeline."

One of the people who asked Clinton questions at the meeting disparagingly declared that "environmental extremists are the Democrats' version of the Tea Party."

At the meeting, Clinton also said she didn't "particularly care" about the environmental justice activists who opposed her, according to the leaked transcript. "I'm already at odds with the most organized and wildest," she told the audience at the Sept. 9, 2015, meeting. "They come to my rallies and they yell at me and, you know, all the rest of it. They say, 'Will you promise never to take any fossil fuels out of the earth ever again?' No. I won't promise that. Get a life."

Clinton continued: "I'm having conversations in these town halls and these meetings I'm having with a lot of people who break into my meetings, they hold up posters, they scream at me, and all the rest of that: 'Stop extracting fossil fuels, stop extracting on public lands, come out against nuclear, coal' you name it. They are after everything and I'm just talking through them. And of course they go support somebody else. That's fine and I don't particularly care."

Podesta and the Clinton campaign have not confirmed or denied the authenticity of the emails. Clinton herself has confirmed, however, the authenticity of excerpts of her paid speeches to financial institutions included in a email leaked by WikiLeaks in which she said she "represented" and had "great relations" with Wall Street.

Clinton made the comments to the construction union two weeks before she came out against the Keystone XL pipeline.

Since her April 2015 announcement of her candidacy for the presidency, Clinton had constantly been asked for her view on the pipeline. She avoided answering the question until late September 2015, when it was largely clear that the Obama administration would oppose it. (The Obama administration formally rejected the Keystone XL pipeline in November 2015, after years of protests by environmental justice groups, and the president said building it would have "undercut" U.S. action on climate change.)

By September 2015 Sanders' enormous grassroots support had posed a serious threat to Clinton's bid for the presidency. Sanders was running on an environmentalist platform. He staunchly opposed the Keystone XL pipeline and identified climate change as the greatest threat to U.S. national security.

Indeed scientists had warned the nearly 1,200-mile Keystone XL pipeline could have been disastrous. As former NASA climate scientist James Hansen wrote in The New York Times, the massive project and use of Canada's dirty tar sands oil would mean "game over for the climate." The tar sands oil transferred by the pipeline would have released so much carbon dioxide into the atmosphere, "civilization would be at risk."

At the Building Trades Union meeting in early September 2015, Clinton made it clear that, while she opposed the Keystone XL pipeline, she supported work on other pipelines. "I'm willing to defend and to really burrow in, I will say, you know, I don't support the Keystone pipeline because I don't think we need to do that," she said, according to the transcript. "I think we need to repair, rebuild, take care of what we've got on the platter here."

A person identified as Questioner 3 in the meeting transcript told Clinton in reference to the Keystone XL pipeline, "I'd rather you nip it and say I'm more interested in fixing existing structures."

Clinton replied, "At some point, I mean, look, I'm being hammered because I won't take a position. And I thought I was doing the right thing by not taking a position. I'll try to figure out the right wording. I get what you're saying."

Questioner 1, who said "environmental extremists are the Democrats' version of the Tea Party" also told Clinton, "It is encouraging when you talk about new pipelines. . . . And so while we fix leaky ones, we want to build new ones." This person added that building pipelines "puts a lot of people to work."

A second questioner noted that "the pipeline industry is booming."

At the meeting Clinton called for using a variety of energy sources and spoke highly of nuclear energy.

Members of the audience also commended Clinton for her "all of the above" approach to energy — supporting renewable energy sources but also backing continued fossil fuel extraction.

Questioner 1 said, "From listening to you we need someone like you to have a grown up conversation with all stakeholders because people have dug in on all sides."

"I know, I know," Clinton replied.

The September meeting transcript is not the only time a WikiLeaks document has surfaced with Clinton's position on fracking. An excerpt from her paid April 2013 speech to Deutsche Bank  also included in the WikiLeaks email trove showed that Clinton had boasted of helping to pioneer fracking. She said, "I've promoted fracking in other places around the world." Clinton added, "I am an all-in kind of person, all-of-the-above kind of person when it comes to America's energy and environmental future."

And in March, Clinton yelled angrily at a Greenpeace activist who had asked her after a rally if she would reject fossil fuel-linked money in her campaign. Clinton quickly lost her temper, shouting, "I am so sick of the Sanders campaign lying about me."

In August of this year, Clinton named a close ally of the oil, gas and mining industries as the chair of her presidential transition team.