Salon's author questionnaire: "Language is at best an effort, always doomed and imperfect" 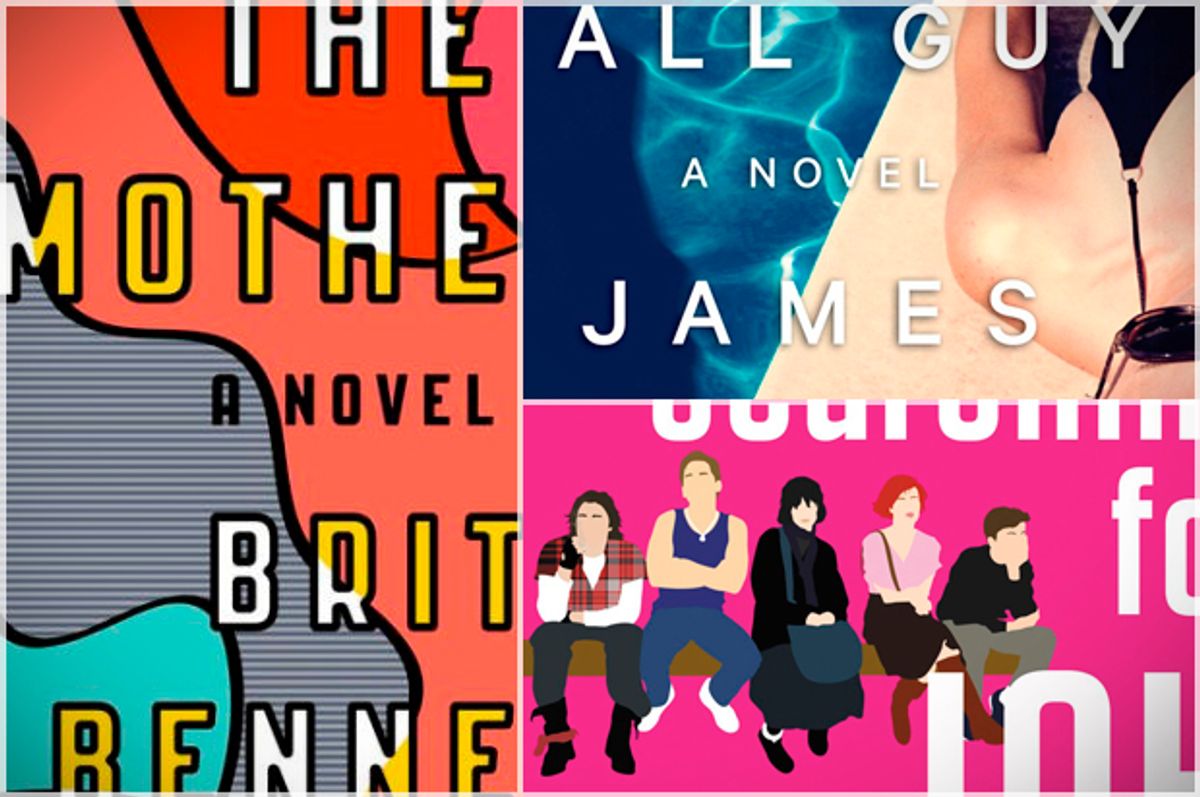 For the second round of fall books, I posed a series of questions — with, as always, a few verbal restrictions — to five authors with new books: Brit Bennett ("The Mothers"), Jason Diamond ("Searching for John Hughes"), James Lasdun ("The Fall Guy"), Daniel Menaker ("The African Svelte") and Mark Slouka ("Nobody’s Son").

Diamond: A former sad teen who loves John Hughes movies a whole lot turns into a sad adult and tries to find happiness through John Hughes.

Slouka: Love and history. The difficult kind. And ghosts. And the way our memories bleed into fiction, and vice versa.

Menaker: It’s about $20, I think — probably cheaper on Amazon. But seriously, as they say, it's about a) the connections in language between what's correct and incorrect, b) the fact that language is at best an effort, always doomed and imperfect but also always beautiful, to represent reality, and c) laughing at the poetry of mistakes.

Menaker: a) Heavily and embarrassingly Oedipally influenced by my mother, a Bryn Mawr classics major and a very early editrix at Fortune magazine, b) the (sometimes silly) punctiliousness of The New Yorker, where I worked for 26 years, and c) a touch of verbal OCD.

Bennett: A childhood of churchgoing and homesickness.

Slouka: If by "influence" we mean a spur, the pressure of time was an influence. The desire to know, as best I can, what made me, and how. The need to come to terms (whatever that means, exactly) with the past.

Lasdun: Psychological thrillers of every stripe. Outcast stories too. And Jacobean revenge dramas.

Lasdun: Transitions, restlessness, travel; kids growing up, semi-return to New York after years in bucolic Woodstock, aftershocks from a prolonged stalking experience that I thought I’d fully processed in a memoir (but hadn’t).

Menaker: The endless lucky nightmare of apartment renovation, falling even more deeply in love with Linda Ronstadt, getting my dog de-quilled (82 porcupine quills, the vet said — a record for that day, which had brought her many other quilled unfortunates), teaching a course in sentences at the Stony Brook MFA program, and keeping my glucose A1C under 6.5.

Slouka: Nearly immobilizing depression and epic, night-long dreams. Both changed (for the better) from week to week as I wrote.

Bennett: I haven’t seen enough reviews to notice any trends yet, but someone described it as “soulful” once, which made me laugh. I feel like soulful just means Black and sad. Which, to be fair, is an accurate description of my book.

Slouka: Offhand I can’t think of any words that have been used to describe my writing, good or bad. Not sure why that is. Probably because reviews, if taken too much to heart, can sucker a writer into wanting to satisfy the customer, so I do my best to block them out.

Lasdun: "Elegant" always makes me wince a little. It sounds like code for "this doofus still thinks people care about sentences."

Diamond: Some guy on Twitter called me a "filthy Jew who should take a shower" for something I wrote. Critics! Am I right?

Diamond: I'd probably own a bar.

Menaker: Fiddler!! Am a great fan of country and bluegrass music and love a great country fiddle, especially when it’s played by Alison Krauss. (Or particle physicist. Not a joke.)

Slouka: If I’d wanted to do something other than writing, I’d have done it – or tried. That said, if the Great God Pan were to give me another turn around the track, I’d want to be a musician — specifically, Louis Armstrong, who I think may have been the happiest man on the planet.

Slouka: Such a tricky question: on the one side, hubris, on the other, false humility. Honestly, at 58, I think I’m pretty good at what I do while at the same time painfully aware that I could be better at everything. Every new book finds a novel way to disappoint me, which spurs me on to the next one.

Diamond: I think I'm pretty good at not doing too much. I'm not trying to sound like the smartest person in the room with my writing because I'm definitely not the smartest guy in the room.  I wish I took more time with my work. I always feel like I'm in such a rush. I really appreciate people like Donna Tartt or Alexander Chee who take a decade to write something. I couldn't imagine being able to do that.

Menaker: Let's see. Um, well, making my attitude and voice come through the little black marks on paper or in pixels. Good at that. Energy combined with skepticism. Humor for sure, present evidence to the contrary notwithstanding. Bad at? Too many dashes — see what I mean? Self-absorption. Long sentences. Haughty vocabulary.

Lasdun: I don’t like to think of writing as a "craft." Don’t feel I’m particularly good at any separable skill ("dialogue," "description," etcetera). You find the resources, somehow, to express an idea if it’s any good. The strength of the idea is what matters. I wish the good ones were more plentiful. So . . . a certain receptivity?

Bennett: I’m pretty good at creating complex characters and writing realistic dialogue. I want to be more creative with story structure and form.

Diamond: I generally don't think that. My thinking is that I've done a good job if a few people read my writing and get something out of it. I'm seriously not trying to sound super fucking earnest saying something like that, but I really love writing and it still shocks me that I do it for a living. I try not to take that for granted and tell myself I deserve anything more. I thought that way when I was younger and it didn't get me anywhere.

Slouka: I don’t contend with it, because I don’t think of it as hubris. Musicians play, painters paint, without wondering (hopefully) why anyone would be interested. They do it because they have something to say, and the miracle is that some stranger out there may respond to that personal vision. As I see it (and this may explain why I’m broke) thinking too much about whether the public will be interested in your wares is good business and artistic suicide. Write the book — then worry about it.

Bennett: It’s humbling to think that anyone would want to spend their limited free time reading my work, so I remain grateful and I try to write something worthy of that time.

Lasdun: I tend to assume they won’t, so it’s always a nice surprise if they do.

Menaker: By hiding my head in shame.