The triumph of Chuck Berry: At 90, the rock pioneer has a new album on the horizon

He may be out of fashion, but the influential guitarist and great songwriter stands tall as he marks 9 decades 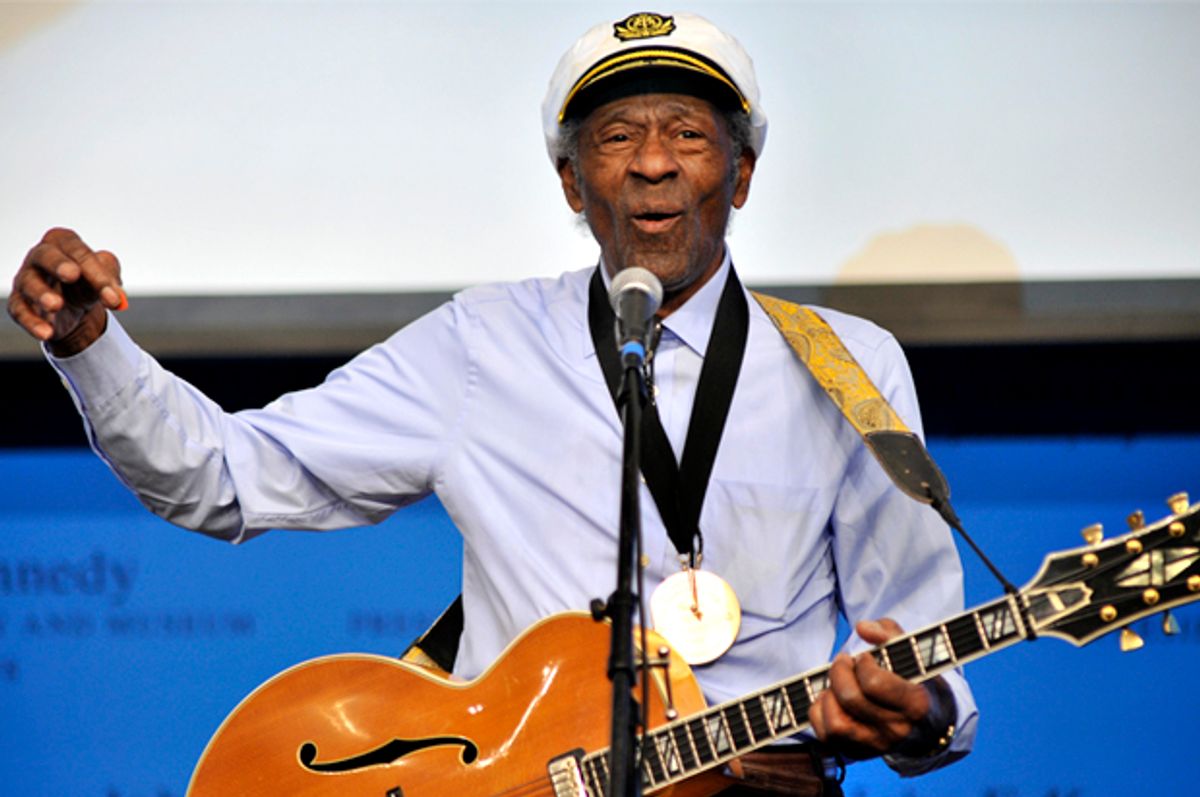 For the last two weekends, some of the biggest rock bands of the ’60s and ’70s have been performing to enormous acclaim — and even more enormous paychecks — in California’s high desert. Oldchella, as the Desert Trip festival has come to be called, included the Rolling Stones, Bob Dylan and former Beatle Paul McCartney.

Meanwhile, the artist most responsible for the careers of those musicians — and perhaps of the genre of rock music itself — has been sitting around a St. Louis suburb, largely ignored. While he’s known as one of the key names in early rock ’n’ roll and even casual music fans recognize a handful of his songs, he’s gradually fallen out of the conversation. His heyday was at least a half century ago. He has not had a hit since the early ’70s. He’s not released a studio album since 1979, and he has not performed a decent-sized concert since New Year’s Day 2011, when he nearly fell off a Chicago stage.

But Chuck Berry, who turns 90 today and has just announced his first album of new material since 1979, deserves to be spoken of with the same regard as Elvis Presley, and as the key influence on many important musicians. In some ways he’s the perfect match to the white boy-who-could-sing-like-a-black man whom Sam Phillips said would make him a million dollars.

Berry, by contrast, grew up in St. Louis, a heavily black city but one also close enough to the South so that he knew many country songs. Among them was “Ida Red,” an old Appalachian song recorded by Bob Wills, that Berry remade as “Maybellene” for Chess Records. Leonard Chess, who owned the storied blues label, saw Berry as a “black hillbilly” who could take his label beyond a blues market that he thought was flattening

Berry sang “Maybellene,” UCLA musicologist Robert Fink has pointed out, in “a wicked parody of white hillbilly (‘cracker’) music performed for black audiences in East St. Louis clubs.” Berry was raised middle class, so the white working-class accent was a put on in two ways.

As Fink wrote by email, “Berry would always introduce the song with exaggeratedly correct stage diction in the 1950s, making it clear to everyone that the accent on the record was a send-up. Thus one of the birth moments of rock and roll depended on the complete inability of the mainstream white audience to understand when it was being mocked by a smoothly signifying black man.”

Of the pioneers of ’50s rock ’n’ roll, which include Presley, Buddy Holly, Little Richard and a few others, Berry “was probably the most all-around talented,” says longtime rock critic Evelyn McDonnell, whose most recent book is on The Runaways. “He wrote some of the most classic songs in all of pop music history, he was a wicked guitarist, and he wasn’t a bad singer either.”

Indeed, Berry would be important even if he were just a songwriter who never played a show or strummed a hollow-body Gibson.

The Rolling Stones included a cover of Berry’s “Carol” on their first LP. The band's second British album included “You Can’t Catch Me” and its second U.S. album kicked off with “Around and Around.” Berry’s “Rock ’n’ Roll Music” and “Roll Over Beethoven” were two of the Beatles’ most performed early songs. (McCartney, appropriately, nodded to Berry's birthday at Desert Trip over the weekend.)

The early Beach Boys borrowed so heavily from his music that Berry has a songwriting credit, alongside Brian Wilson, on “Surfin’ USA.” Even musicians who seem to come from a different tradition have paid homage to Berry: The British electric-folk band Fairport Convention included a blistering version of “Sweet Little Rock ’n' Roller” in its live set, with guitarist Richard Thompson showing the debt he owed Berry.

He’s not the only one: Keith Richards’ style is deeply rooted in Berry, as has been the work of just about everyone who plays in a rockabilly or ’50s rock or blues-rock style.

Berry, of course, has drawn his share of praise since he emerged in the mid-’50s. He’s topped polls, been inducted into the Rock and Roll Hall of Fame, and Berry’s “Johnny B. Goode” was the only rock song on the Voyager Golden Record sent into space in 1977. “If you were going to give rock 'n' roll another name,” John Lennon said, “you might call it 'Chuck Berry.’”

Berry has symbolized the past — in “Pulp Fiction,” John Travolta and Uma Thurman dance in a retro joint to “You Never Can Tell” — as well as the future: Essayist Chuck Klosterman recently wrote in his book “But What If We’re Wrong?” that Berry is the one rock figure who could be used to symbolize the whole field to people in distant centuries.

But despite this and his outliving many of rock’s other pioneers, Berry has been less visible in recent decades. (Klosterman, who is decidely contrarian, may have selected him over the more obvious Beatles, Dylan or Presley for just that reason.) His falling capital may have come partly because he has not treated his legacy terribly well, touring on his old hits during the ’70s and ’80s without a band, so that local backup groups — of extremely varying quality — delivered his music. (Bruce Springsteen, who was part of one of those backing bands in the early ’70s, recalled Berry as not telling his band what he planned to play, responding to a request for a set list with, “Well, we’re going to do some Chuck Berry songs.”)

Berry has also had trouble with the law, including a conviction for armed robbery in the years before he recorded music. The most robust phase of his career was interrupted by a conviction under the Mann Act, due to his hiring of a 14-year-old hatcheck girl at one of his nightclubs, and he served a very rough year and a half in prison in the early ’60s. He has also been dogged by accusations and charges, from drug possession to unfair songwriting credits, over the years. (Despite being perhaps the oldest rock ’n’ roller alive, he hardly leads the league in criminal charges.)

Unlike Presley's or Buddy Holly's, Berry's songs don't vary much in style. The fact that the popular Berry songs often sound the same as one another probably doesn't help. Yet they possess lyrics that helped mythologize the American teenage experience and a propulsive drive often accompanied by his signature duckwalk.

Musicologist Fink said he suspects that the way many people now think about music history in the 21st century also does Berry no favors: In the progression of “authentic” black figures — with Robert Johnson and Muddy Waters leading to Berry and then to the ensuing bounty of rock music — he was a crucial hinge figure. But if funk, hip hop, contemporary R&B, and various forms of black pop are the dominant forms to which history has been leading, Berry looks less central than, say, Ray Charles or Sam Cooke or Marvin Gaye. The fact that he sometimes sang with an exaggerated white-cracker accent makes him even harder to place.

But with so many great musicians passing away in recent months — most recently Prince, David Bowie, and George Martin — let’s celebrate a titan living to see 90. And while it’s hard to know what it will sound like, Berry’s next album — “Chuck,” due next year on Dualtone and recorded with his longtime backing band — is another reason to be cheerful. At the very least: Happy birthday to Chuck Berry. Long may you reign.