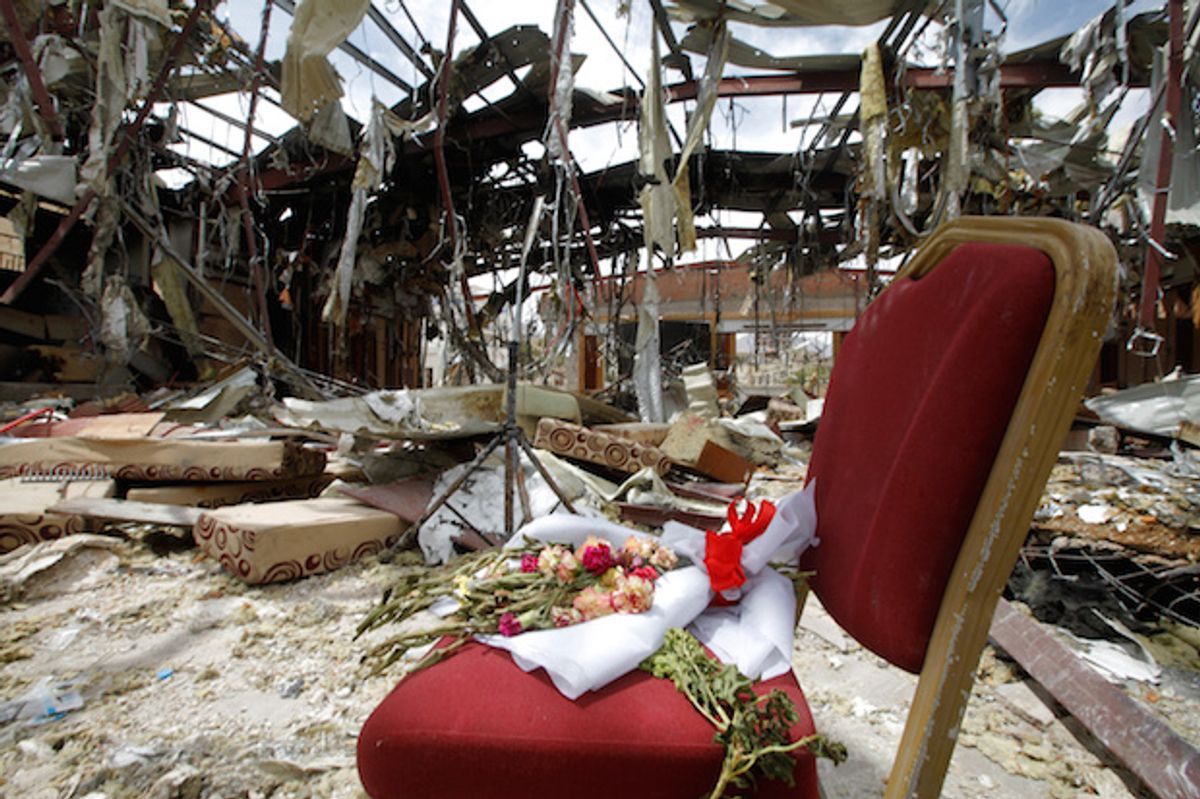 Flowers on a chair in the ruins of a community hall that the U.S.-backed, Saudi-led coalition bombed during a funeral on October 8, in Sanaa, Yemen, October 16, 2016 (Reuters/Mohamed al-Sayaghi)
--

A congressman is calling on Secretary of State John Kerry to halt U.S. support for the destructive Saudi-led bombing campaign in Yemen.

"The continuing civilian carnage caused by the Saudi Arabia-led military coalition in Yemen is horrifying," Lieu wrote in the letter, a copy of which Salon received.

"It appears that either the Saudi coalition is intentionally targeting civilians or they are not distinguishing between civilians and military targets. Both would be war crimes," he stressed.

Since March 2015, a coalition of 10 Middle Eastern countries led by Saudi Arabia and armed and supported by the U.S. and U.K. has been bombing Yemen, the poorest country in the Middle East.

At least 10,000 Yemenis have been killed in the war, including more than 4,100 civilians, according to the United Nations. Western-backed airstrikes have been responsible for nearly two-thirds of the civilian casualties, the U.N. has repeatedly reported.

Amnesty International and Human Rights Watch have documented at least 70 illegal airstrikes on civilians carried out by the coalition, Lieu noted in his letter, sent on Oct. 11.

A U.N. panel of experts also documented coalition attacks on a variety of civilian targets, including hospitals, schools, homes and refugee camps.

"The frequency and scale of the civilian killings by the Saudi military coalition make it difficult to come to any conclusion other than that war crimes have been and are continuing to be committed in Yemen," Lieu wrote.

"The repeated and frequent strikes on civilians show that the issue is not the gross incompetence of the Saudi military coalition," he said. "Apologists for the Saudi coalition can perhaps defend a few errant bombs, but not over 70 unlawful airstrikes."

The U.S. has refueled thousands of Saudi warplanes and provided intelligence to the coalition. The Obama administration has also sold billions of dollars worth of weapons to Saudi Arabia, some of which have been used to kill Yemeni civilians.

In his letter, Lieu warned that the atrocities could help extremists. The U.S.-backed war has helped al-Qaida grow in Yemen, and even Islamic State forces have entered the country, seizing on the chaos.

"The aiding and abetting of Saudi airstrikes on civilians is a potential recruiting tool for terrorists," Lieu wrote. "Every U.S. assisted bomb that kills children, doctors, patients, newlyweds and funeral mourners has the potential to amplify hatred towards the U.S."

One of the worst massacres in the war happened on Oct. 8. The Saudi-led coalition bombed a funeral in Sanaa, Yemen's capital, killing more than 140 people and wounding at least 600.

Human Rights Watch labeled the attack an apparent war crime using U.S.-made bombs and called for an immediate independent investigation. An Oxfam America official termed the "massacre of civilians" as a "gruesome act" and accused Saudi Arabia of "using U.S. support to legitimize its heinous conduct and deflect international criticism."

The Saudi-led coalition eventually admitted that the attack was intentional but blamed it on "false information" that Yemeni rebel leaders were present. The coalition is fighting Yemen's Houthi rebels and allied militias loyal to former Yemeni president Ali Abdullah Saleh.

On Tuesday, Rep. Lieu released a statement condemning the attack on the funeral. "The Saudi-led military coalition has now essentially admitted to committing war crimes," he said. "The civilian funeral ceremony was the intended target of the Saudi coalition."

Lieu pointed out that even if rebel leaders had been present, "that would not justify an airstrike that targeted more than 650 civilians." According to the law of armed conflict, military force cannot be used if it will cause disproportionate civilian casualties.

"This airstrike is yet another example of a disturbing pattern where the Saudi coalition drops bombs on civilian targets nowhere near military targets, or drops bombs killing a disproportionate number of civilians," Lieu wrote.

The congressman called for the resignation and investigation of Saudi military officials and said the U.S. "needs to immediately cease aiding and abetting a Saudi coalition that has committed war crimes."

Lieu, who represents California's 33rd Congressional District, which is mostly on the west side of Los Angeles, has been among the most outspoken critics of U.S. support for the war. Before becoming a lawmaker, he served in the U.S. Air Force and taught the law of armed conflict.

Lieu's letter to Kerry, who heads the government agency overseeing U.S. support for the war, is not his first. The congressman sent Kerry a similar letter in March. Lieu's communications director told Salon that Kerry's office has not responded to either letter.

Salon has reported on Lieu's previous attempts to raise concern about the war in Yemen within the government.

In September, Lieu introduced a House bill to block a $1.15 billion U.S. arms deal with Saudi Arabia. The Senate version of the legislation failed to pass.

Internally, the State Department has expressed concerns about the war. Lieu cited in his new letter an investigation by Reuters, which obtained government records through Freedom of Information Act requests. The internal documents show that government lawyers warned officials that the U.S. might be implicated in Saudi war crimes in Yemen.

An email obtained by Reuters shows that Deputy Secretary of State Antony Blinken held a meeting with U.S. officials and discussed “options to limit U.S. exposure to LOAC (Law of Armed Conflict) concerns” in the war in Yemen.

Despite concerns about complicity in war crimes, large U.S. weapons sales to Saudi Arabia continued. Since 2015, the Obama administration has made more than $20 billion in arms deals with the Saudi monarchy, and since 2009 the U.S. has offered more than $115 billion in weapons sales and military support.

In his new letter to Kerry, Lieu echoed State Department officials' concerns that the U.S. could be implicated in war crimes in Yemen. He cited the State Department's office dedicated to preventing foreign war crimes: "The credibility of that office has been shredded by the U.S.-enabled airstrikes on civilians in Yemen."

The conflict in Yemen drags on, although the U.N. has been calling for a ceasefire. On Tuesday both sides agreed to a 72-hour truce. The temporary cessation of hostilities will allow aid groups to deliver support to Yemen, which the U.N. says is going through one of the world's worst humanitarian crises. More than half of the country, 14 million people, is going hungry and at least 80 percent of Yemenis are in dire need of humanitarian aid.