Donald Trump's alpha male insecurity: Getting his butt kicked by a girl is just too much for him

Even before Barack Obama told him to "stop whining," Trump's masculinity was in crisis thanks to Hillary Clinton 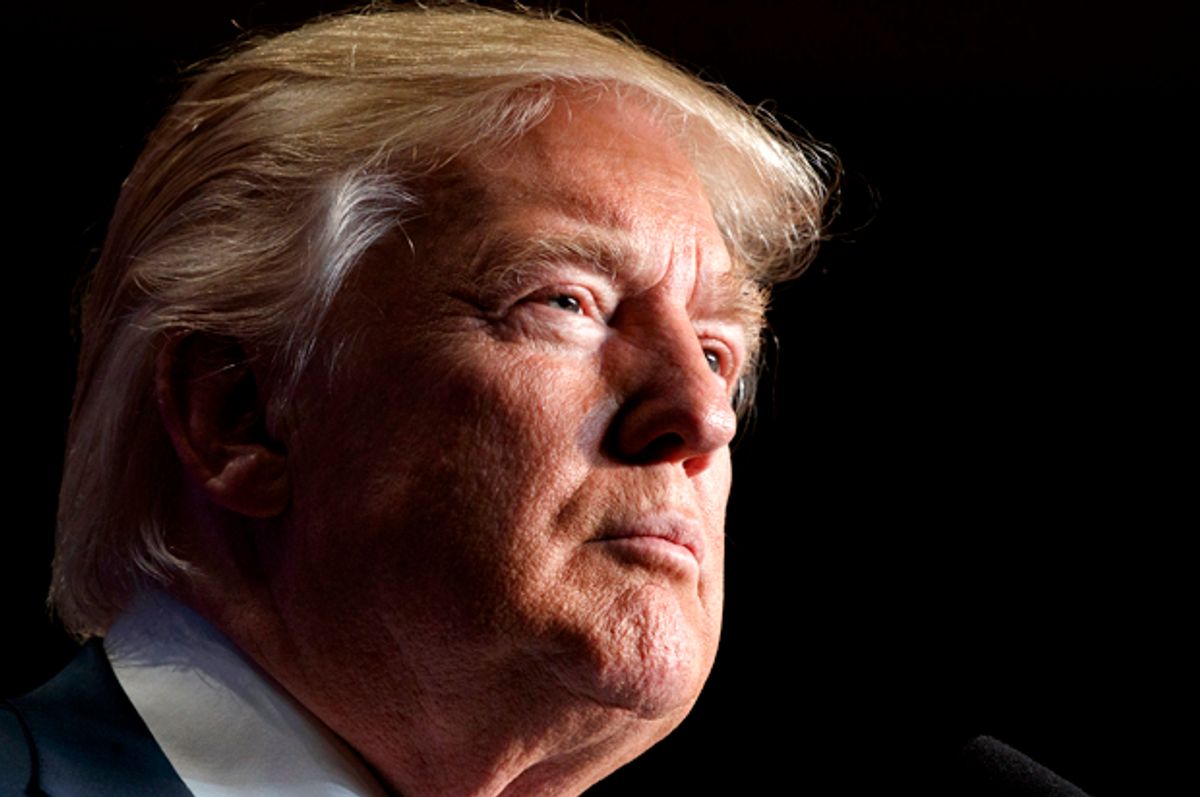 At the heart of Donald Trump’s talk of a “rigged” election lies one incontrovertible fact that eats away at him: He is getting his butt kicked by a girl.

Trump can try to pass off his misogyny as “locker-room talk.” He can repeat over and over that “no one has more respect for women than me.” His wife can proclaim with a straight face that he was egged on by someone else to make the comments caught on tape by “Access Hollywood,” which were all just “boys being boys.”

But even the most self-involved narcissist would be thrown by the number of women rising up from his past like vengeful spirits to accuse him of sexual harassment and assault. He has taken a beating from the press over the charges. For a master manipulator like Trump, this must be galling.

On top of that, it is pretty telling that he does not seem to recognize how his walk backs and defensiveness over the comments that got Billy Bush fired from NBC undercut his entire sales pitch for electing him to the presidency.

From the beginning of his campaign, Trump has cast himself as a brawling alpha male who will wreak havoc on the rest of the world so that America may “win” again. Indeed, it is the defining theme of the case he's made for himself to be the next occupant of the Oval Office.

And part of being a political alpha male, at least to Trump, has meant publicly casting all his opponents as weaklings who cannot measure up to him. They must be tarred as “low energy” or “little” or some other diminutive. It certainly does not mean pushing policies. The closest Trump generally gets to talking policy is to claim, with no evidence whatsoever, that he knows more about a particular issue than anyone else.

During the general election campaign, this alpha-male shtick has meant raising questions about Democratic nominee Hillary Clinton’s health and stamina, especially last month after she contracted an ill-timed case of walking pneumonia. Or it has manifested as a need to denigrate President Barack Obama for making “bad deals” or being a terrible negotiator. The implication being that Trump, like one of the Masters of the Universe in “The Bonfire of the Vanities,” would not let other nations walk all over him the way they walked all over the current president.

Trump has been, for all intents and purposes, Sean Connery in a scene from “The Rock,” growling at Nicolas Cage, “Your best? Losers always whine about their best. Winners go home and fuck the prom queen.”

But now that he is incontrovertibly losing, with the polls showing the possibility of a blowout, Trump has started talking about a “rigged” election, about shadowy cabals of globalists, members of the media, the FBI and Department of Justice, the guy in charge of setting the sound level on his microphone at the first debate, and God knows who else who has been conspiring to steal the presidency from him and, by extension, from America.

So it must make him want to clench his tiny fists in rage when the president tells him to “stop whining and go try to make his case” to the voters, as Obama did on Tuesday. The same president whose people ran the infamous Pajama Boy campaign a few years ago, an attempt to sell Obamacare that was ridiculed by conservatives for the soft and vaguely effeminate young male at its centerpiece, was telling Donald J. Trump to suck it up, quit complaining and get to work!

The same president who conservatives in 2008 tried to label as somehow unmasculine because he kind of sucked at bowling was now emasculating the GOP candidate by making him sound like a whiny little boy!

Trump, self-proclaimed master of the New York real estate market, conqueror of reality television, builder of monuments to his own ego that he slaps his name on in gilded 50-foot-tall letters, is going to get beaten by a girl and her surrogates who are not afraid of him. That’s not how the universe — his universe — is supposed to work.

This must gall Donald Trump so, so much. He has built his entire persona on being the biggest bully on the playground. Yet the worse the outlook for his campaign becomes, the smaller he looks, the more his bluster is revealed as cheap and empty, as shimmery a mirage as his purported net worth.

He has only himself to blame for his impending loss. And he can’t even do that successfully.