"Hamilton's America" takes us into the rooms where it happened 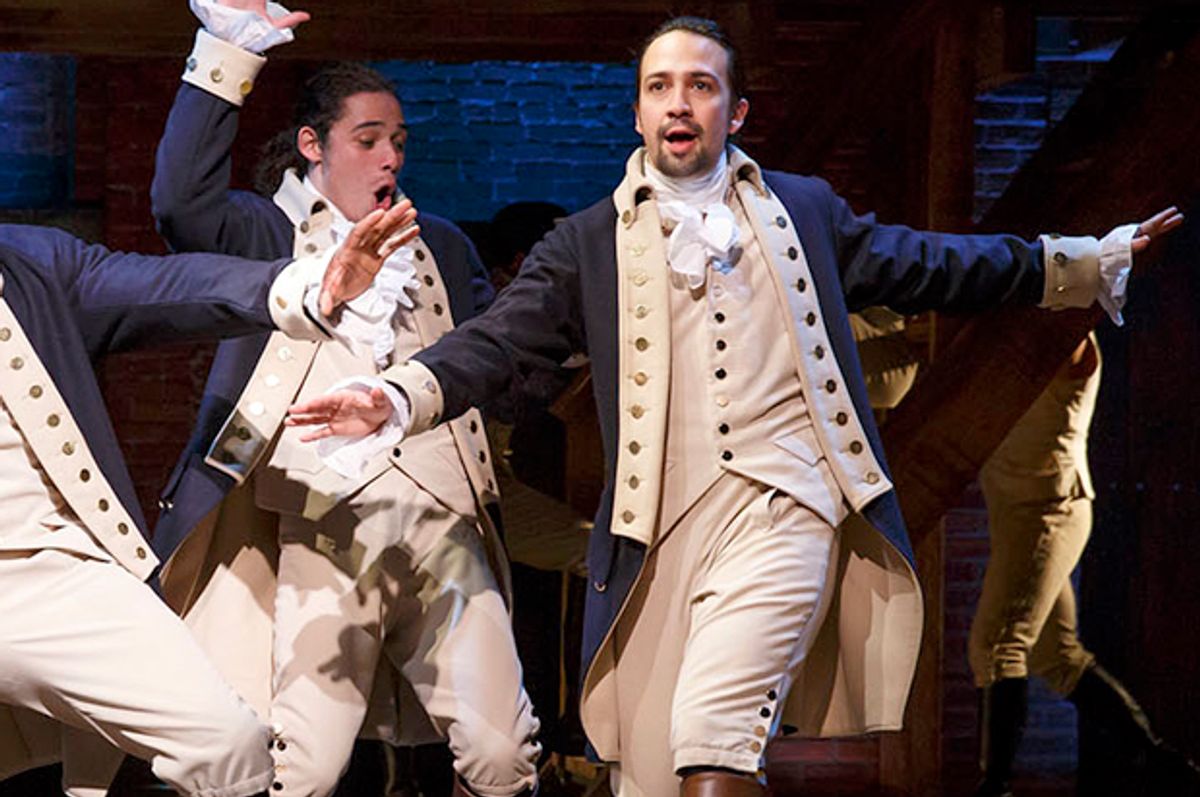 Pulling off a workable musical requires a kind of artistic skill few possess. Creating a legendary musical, though, is achieved only by hitting the tiniest bull's-eye created at the crossroads of talent, determination, originality and luck. None of those factors can be discounted, as we see in “Hamilton’s America,” which premiers Friday at 9 p.m. on PBS member stations.

It took Lin-Manuel Miranda’s vision and imagination to see the potential for greatness in the story of a Founding Father whose life was for the most part unsung — that is, before he pulled Ron Chernow's Alexander Hamilton biography off the shelf during a vacation. Miranda originally conceptualized aspects of the story as a hip-hop project initially known as “The Hamilton Mixtape.”

But even Miranda's  perseverance to see through to the finish what sounded like an improbable project might not have amounted to much if he hadn’t taken up the White House on an invitation to perform a song — the only “Mixtape” song in existence at that point — in front of the Obamas. Someone recorded his performance, shared it online and Miranda watched it go viral. And that stroke of good fortune helped fuel the half-decade journey that resulted in a cultural phenomenon.

Like the musical it profiles, “Hamilton’s America” also was born out of a lucky hunch. Director Alex Horwitz, one of Miranda’s roommates at Wesleyan University, decided that his college buddy’s half-baked idea might grow into something big and decided to follow Miranda for three years.

In that span of time the director captured the development of what would eventually become “Hamilton” from its nascent stages through to its opening night off-Broadway, adding in later footage of the play's runaway success at the Tony Awards show and on Broadway.

To Miranda's credit, the musical's creator made Horwitz’s task easier by throwing himself into the task of honing his stagecraft and getting the minutiae of Hamilton's story right. In the documentary, footage of Miranda weaving lyrics in Aaron Burr’s bedroom with his headphones, on or visiting historic sites with other cast members, including Leslie Odom, Jr., Daveed Diggs and Christopher Jackson, makes his artistic effort tangible.

Miranda did more than simply make an overlooked historical figure dynamic and compelling in creating “Hamilton.” He birthed a vibrant, fresh way of sharing a most American tale — one that speaks to who we are as a nation, our concept of ownership over our foundational structures and values, our legacy and our history.

In addition to those location shots, beautifully filmed musical segments from the Broadway stage and the cast’s White House appearances, “Hamilton’s America” features interviews of politicians such as House Speaker Paul Ryan, former president George W. Bush, Sen. Elizabeth Warren and President Barack Obama as well as an assortment of artistic luminaries and historians, who talk about the 18th-century leader’s impact on our history as well as the importance of the musical.

Such content is par for the course in a project like this. Only here, the overwhelming affection Americans have for Miranda’s musical infects the tone of their observations, further augmenting the swell of curiosity and wonder propelling the documentary along. Not everyone has glowing things to say about Hamilton himself; Warren’s observation about his creation of our country's capitalist structure is sobering, and historian Joanne Freeman points out his less than savory qualities.

This is part of the way “Hamilton’s America” dispels the myth about Hamilton, humanizing him by looking at his flaws while also appreciating his hustle — the soul of rap culture. Thus in choosing to tell a story of a Founding Father with the swagger and emotionality of hip-hop, Miranda conveys Hamilton’s significance on multiple levels.

“Hamilton’s America” also smoothly marries the very personal nature of the musical’s story with Hamilton’s impact on the nation and the world, adopting Miranda’s iconoclastic flavor in the process. In one of the film’s most affecting moments, Miranda draws parallels between his rendering of Hamilton on the stage and his family by having his father share his story of coming to New York from Puerto Rico.

Today, scoring tickets to a live production “Hamilton” is nearly impossible. Even catching the touring version is a gamble, which is amazing to think of, given that the subject is Alexander Hamilton, the man most people know as the guy on the $10 bill.

Because of this, a number of viewers will tune in to “Hamilton’s America” mistakenly hoping to view enough of the musical to ease the pain of waiting for their shot at a seat in a room where it happens. The documentary includes glimpses of musical numbers, adding context by discussing elements of Hamilton’s life that inspired each song and its themes. But while the documentary airs as part of PBS’ “Great Performances” series, the actual performance is shown in only small slices.

What we get instead is an enthralling, uplifting 90-minute examination of the creative process that went into making “Hamilton” while leading us though the life of its statesman subject and the impact he had on the world. This is a rare balancing act to pull off, both in the realm of nonfiction filmmaking and on the stage.

“Hamilton’s America” is one of two musical offerings hitting television this week. The other — Fox’s “The Rocky Horror Picture Show: Let’s Do the Time Warp Again!”— is a demonstration of what happens when stage magic is transformed into a 1975 film that flops, only to morph into a cult phenomenon of participatory art. Years later this weird, the wild tradition has been exsanguinated of its delightful freakishness by industry trend chasing, courtesy of prime-time television.

The re-imagining of “Rocky Horror” debuting Thursday at 8 p.m. — the family hour! — is the latest entry in the trend of mounting musical events on television, only it was a film presentation as opposed to a live broadcast. Fox’s decision to do “Rocky Horror” as a telefilm has a certain logic to it, if you consider the potential unwieldiness of re-creating the midnight film culture experience via a live TV event.

To run a movie behind a cast of audience members replicating the action in front of it would be a visual mess. Yet that meta construct makes midnight showings of “Rocky Horror” such odd cultural treasures. Take away the audience participation, with all its singing along and messy toilet-paper tossing, and you simply have a strange movie ostensibly inspired by classic horror and sci-fi films that otherwise makes very little sense at all.

As directed by Kenny Ortega, this “Rocky Horror” is basically an invitation to stare at a goth-inspired snow globe for two hours. It gets points for style, and casting Laverne Cox as Dr. Frank-N-Furter (a role originated by Tim Curry, appearing here as the Criminologist Narrator) is a stroke of something close to genius.

Once we get past her grand entrance, however, the thrill dies quickly. There’s much to adore in Cox, but her Frank-N-Furter’s bizarre elocution grows increasingly irritating as the story progresses, and her co-stars, including “American Idol” runner-up Adam Lambert (Eddie) and Victoria Justice (Janet Weiss), don’t lend much in the way of support or distraction. One can’t expect Justice to compete with Susan Sarandon, of course, but is giving us a memorable update for Janet too much to ask?

A lack of originality is this “Rock Horror” redux’s fatal error, but knowing that may give viewers more appreciation for the creativity explored and celebrated in “Hamilton’s America.”

Besides, it’s remarkable to think that musical theater has risen in the mainstream audience’s estimation so greatly that broadcast television has two prime-time offerings to choose from in the same week. Regardless of any single opinion about Fox’s “Rocky Horror” special or Friday’s "Great Performances" presentation, the fact that networks saw fit to present them is a hopeful statement about the potent allure of creativity in these fraught times.

In “Hamilton’s America” Miranda acknowledged that idea. “I am aware that musical theater does not get off the arts page often,” he said. “And here we are.”