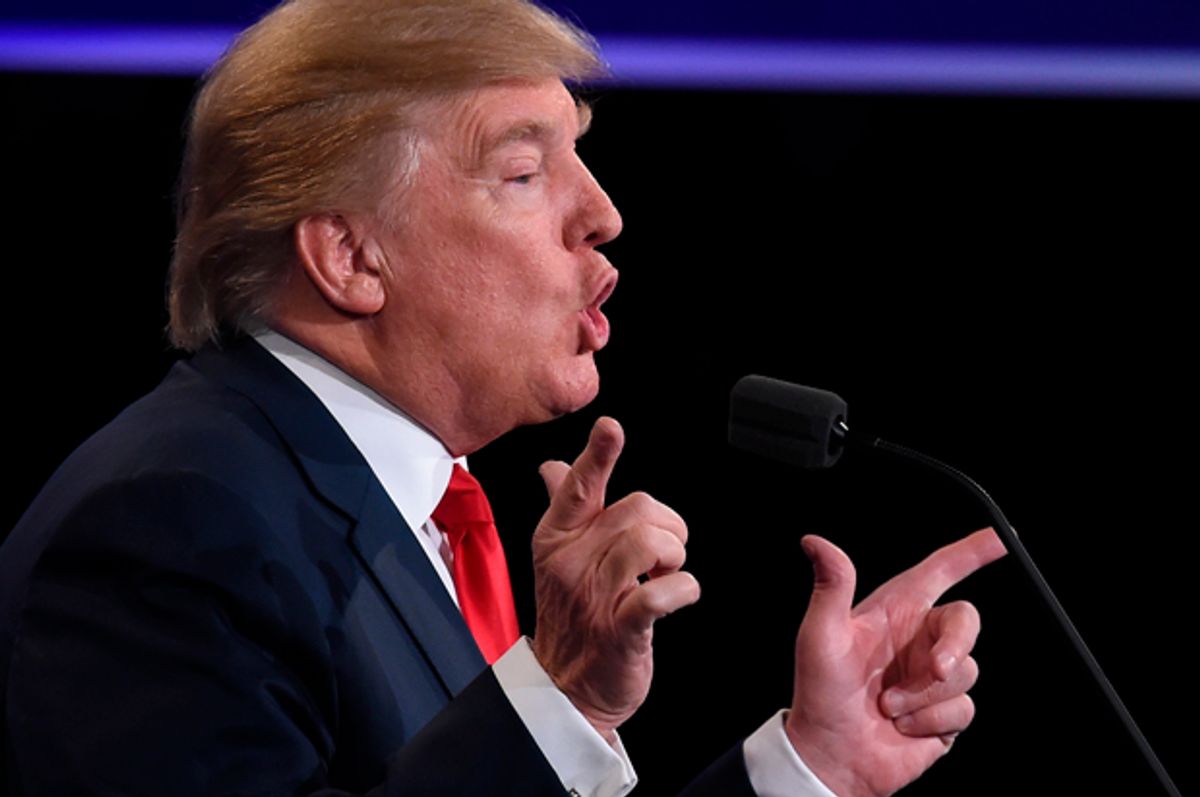 The third and final 2016 presidential debate is over, and with the clarity of hindsight we can now say that three debates was almost certainly two too many. What a grim slog. What a joyless mockery of democratic action. We learned nothing, we marinated in bitterness and resentment, and it was all the doing of Donald Trump, who is too ignorant of how the political system is supposed to work to understand the damage he’s inflicting on it.

As has been the case with every Trump debate performance, there was a broad array of low points to choose from on Wednesday night. But there was one comment he made that should be the focus of discussion surrounding this debate.

Donald Trump, the nominee representing the Republican Party on the national debate stage, refused to say he would accept the results of the election.

After Trump questioned the integrity of the voter rolls and called Hillary Clinton a criminal who “shouldn't be allowed to run,” Wallace found himself in the position of having to lecture the GOP nominee on principles of the peaceful transfer of power. Wallace asked if Trump was really not willing to make that commitment.

“What I'm saying is I'll tell you at the time,” Trump replied. “I'll keep you in suspense, OK?” (Clinton, it must be pointed out, thoroughly dismantled Trump’s suggestions of fraud in one of her best moments of the evening.)

Here’s why Trump’s answer bothers me so much. A couple of weeks ago, I drove to Manheim, Pennsylvania, to see Trump speak and talk to some of his supporters in that heavily Republican part of the state. One guy I talked to,  a large, burly fellow in a Lancaster County Republican Party T-shirt, was confident that Trump would win the state. And if Trump didn’t win, he explained, it would be because of fraud. “They’re going to try to rig it for Hillary,” he said. “I really, truly believe that. I’ve been told there’s people in Philadelphia — I know it’s happening other places — they take dead people’s votes and throw them in for Democrats.”

Then things got pretty dark. “If Hillary gets in, there’s probably going to be a revolution in this country,” he told me. “Because people are so fed up.” As he said this, someone walking by who had overheard him shouted out, “Damn straight! Break the guns out! No use letting them sit in the closet.” A smattering of applause greeted this outburst, and my interviewee responded by saying, “Shoot their frickin’ liberal asses.”

I laughed it off because that’s what you have to do in those situations. And there’s every possibility that it was just two yahoos talking tough while feeling the excitement of a presidential rally. All political candidates have overzealous supporters, and the election season tends to amplify some already strong emotions.

Trump seems intent on blowing all this up. He’s attacking the legitimacy of the process and stating in plain terms that his opponent is an illegitimate candidate. A Trump supporter who feels the election is rigged and that Hillary Clinton might have to be overthrown needs to be nudged back from the edge. Trump, with all the influence he wields, is instead coming up behind those people and urging them to leap into a very dark abyss.

Again, that’s not to say that the two would-be revolutionaries I met in Pennsylvania would actually resort to the sort of violence that they thumped their chests over while waiting in line to see their candidate. But I’d feel a lot better if their candidate weren’t doing everything in his power to egg them on.