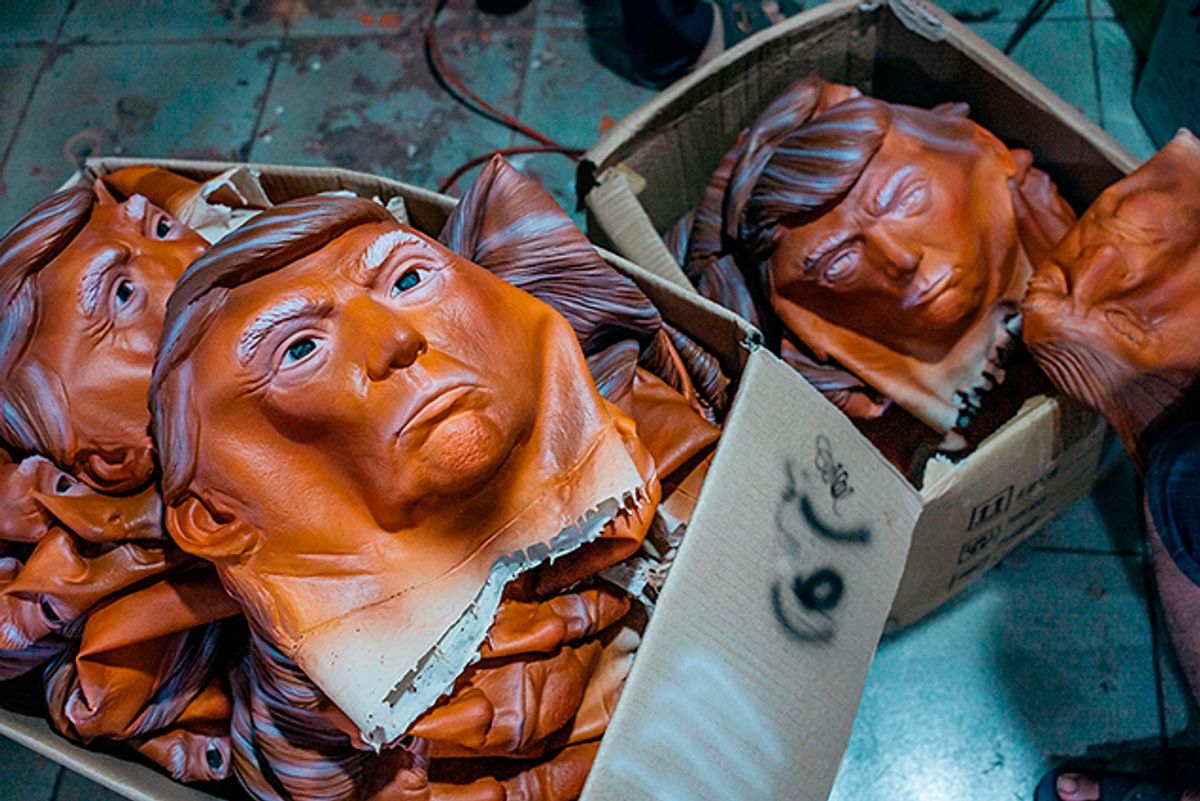 Masks of Donald Trump are seen in boxes at the Shenzhen Lanbingcai Latex Crafts Factory on October 18, 2016 in Shenzhen, China. (Getty Images)
--

Even if he doesn't win, Donald Trump has still done untold damage to our country. His sexist rhetoric, xenophobic appeals to white nationalists and all-out embrace of the far-right fringe have mainstreamed a kind of hateful politics that will take a long time to get rid of. But one of the most damaging parts of the Trump campaign, at least in the long run, could end up being what he's doing right now.

As his presidential prospects continue to fade, Donald Trump has resorted to spreading conspiracies theories about voter fraud. He now says at his rallies that the election will be "rigged."

So-called responsible Republicans like Speaker of the House Paul Ryan have, of course, tried to distance themselves from this kind of rhetoric. In a statement to Buzzfeed, his press secretary said that, "Our democracy relies on confidence in election results, and the speaker is fully confident the states will carry out this election with integrity."

This sounds nice, but it's really a bunch of BS.

What Trump is saying right now about voter fraud is no different than what other Republicans have been saying for years—he's just added his own Trumpian flair to it. And what's dangerous about all this talking about rigged elections isn't the fact that it undermines the confidence in election results, it's the fact that it empowers the forces in our society who actually are trying to undermine our democracy, and yes, rig our elections.

I'm talking, of course, about Republicans.

Since the Koch-backed wave elections of 2010, the Republican Party — the party that Donald Trump will represent on the ballot on Nov. 8 — has waged an all-out war on voting in the U.S.

In state after state, the GOP has forced through voter suppression law after voter suppression law, mostly in the form of voter suppression ID laws, the sole purpose of which is to keep minority (and thus Democratic-leaning) voters away from the polls, since young people, elderly people, poor people and people who live in big cities and don't own cars disproportionately lack the type of IDs needed to vote.

This isn't some sort of conspiracy theory, either. Republicans openly admit that these voter suppression ID laws are about rigging elections in their favor.

Back in April, for example, Republican Wisconsin Congressman Glenn Grothman admitted the truth about his state's new voter ID law in an interview with a local TV station.

Voter suppression ID laws, though, are just the beginning.

Republicans have also cut back on early voting, same-day registration and pre-registration, all in an obvious attempt to suppress the vote of Democrats.

So how are Republicans able to get away with such transparent rigging of elections in their favor? Easy — they've convinced wide swaths of the American public that elections are already rigged by something completely different — this time called "voter fraud."

So-called "voter fraud" is the stated reason for every single one of the voter suppression measures Republicans forced through in recent years, and it's the basic building block of Donald Trump's conspiracy theories about the "stolen" 2016 presidential election.

The only problem with the Republican assertion, however, is that voter fraud doesn't actually exist, at least not in any meaningful way.

A recent study out of Loyola University found just 31 credible cases of voter fraud out of more than a billion ballots cast in the decade-and-a-half between 2000 and 2014.

The truth is that voter fraud is a pretext — a pretext to rig elections in the single largest assault on democracy we've seen in more than a century. This is what's so dangerous about Donald Trump's talk about "rigged elections."

If, as is likely the case, he loses in a historic landslide on Nov. 8, his supporters will have a ready-made excuse to explain away that defeat — one that will conveniently blame minorities and Democrats, not their own candidate's very obvious flaws. And while that's problematic enough on its own, the real problem with Trump's rigged election talk is that it will give Republican legislatures all across the country a new justification to ramp up their war on young people, people of color and older people voting. The base will want it because Trump will have primed them for it, and so will the party establishment, because they've always worked to suppress the vote.

In other words, by complaining about a rigged election, Trump is helping the Republican Party ensure even more badly rigged elections — where young people, people of color and older people can't vote — in the near future.