After it was clear Donald Trump lost the third debate, Hannity set his target on the “weak and ineffective" speaker 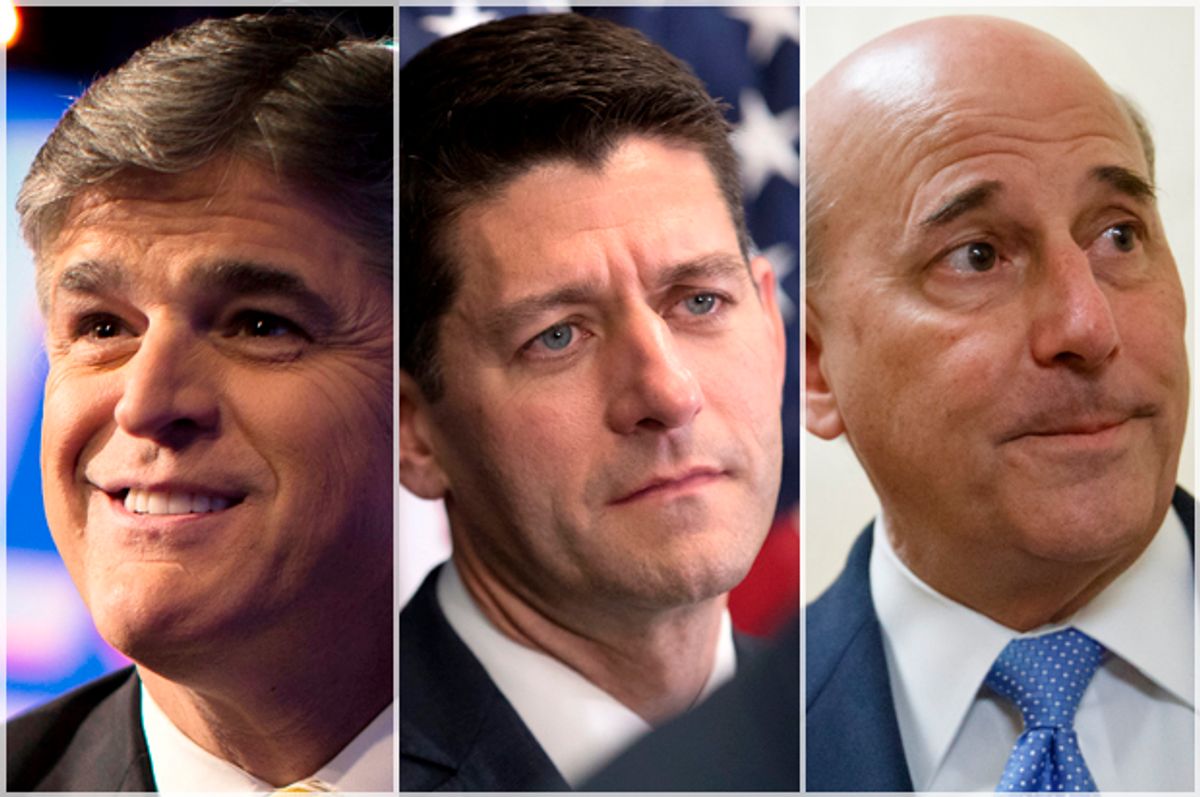 How do you know Republican presidential nominee Donald Trump lost the third and final debate? Well, aside from the scientific CNN/ORC poll and even the completely unscientific Breitbart online "instant-poll" declaring Trump's rival Hillary Clinton as the winner of Wednesday's Las Vegas face-off, the clearest evidence that Trump failed to deliver a winning performance is that he immediately set off the latest battle in the GOP's civil war.

Minutes after the debate ended, Trump's loudest media sycophant Sean Hannity was already aiming his fire at House Speaker Paul Ryan, whom the Fox News host blamed for failing to properly back the GOP nominee.

In the post-debate spin room, Hannity told Washington Post reporter Robert Costa that Ryan was a “saboteur” who “needed to be called out and replaced.” Days earlier Hannity went after Ryan on his radio show after the speaker refused to defend Trump following the release of a 2005 hot mic moment in which the businessman boasted he was able to sexually assault women because of his celebrity:

You know what bothers me the most about Paul Ryan and these weak Republicans? They are tougher against Donald Trump than these weaklings ever have been against Obama, and if they're offended by Trump's words, why haven't any of them spoken out about Bill and Hillary's actions towards women? They're a bunch of phony — I mean I can't take it anymore. They are so weak that Obama got his entire agenda passed.

Two days before the final debate, Hannity had said, "I think it may be time for a new speaker. I'll deal with this after the election, but I think maybe it's time for somebody that can lead."

As soon as the debate ended, Hannity told the Post that he wanted Ryan to be replaced by an even more conservative Republican like Texas Rep. Louie Gohmert or House Freedom Caucus member Mark Meadows of North Carolina.

While Hannity's quest to make the lower chamber as radically conservative as possible is hardly a new endeavor for the commentator, his latest attack on Ryan's speakership has come after his preferred presidential candidate repeatedly slammed Ryan as “weak and ineffective” two weeks ago.

And according to a new Bloomberg poll of Republicans, Hannity is reflecting the mood of GOP voters: Twenty-four percent of respondents said they want Trump to remain the face of the Republican Party in the event that Clinton takes the White House compared with only 15 percent who said they wished Ryan to lead the party. Additionally, 51 percent of GOP voters said Trump's views match their own, while only 33 percent said the same of Ryan.