"Such a nasty woman": Donald Trump and the last gasp of an angry id 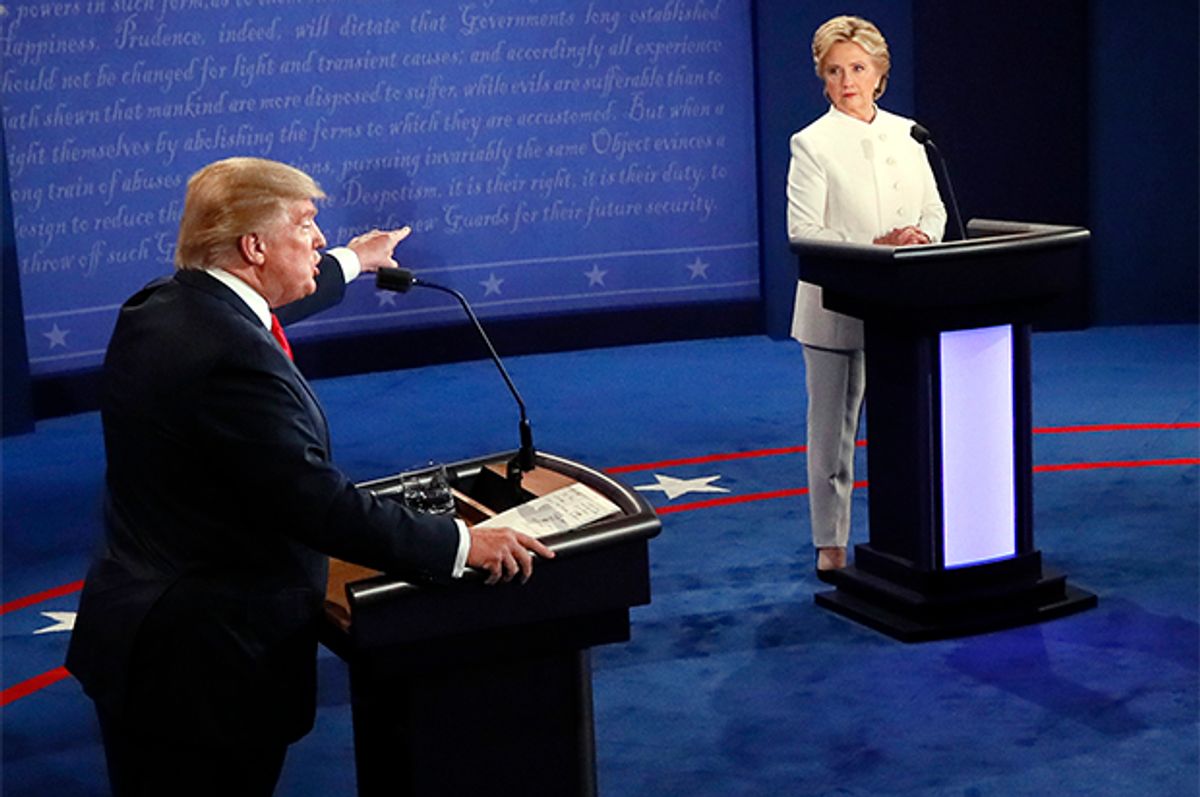 Donald Trump gave his audience, at least, what it wanted at the third and mercifully final presidential debate Wednesday night.

As was the case during the second debate, Trump was not so much a presidential candidate as he was the angry Republican id that has been howling in rage about Hillary Clinton for two and a half decades. He was the avatar of years of conservative frustration, the vessel through which the right could channel every sputtering protest against Hillarycare, every lurid conspiracy about Benghazi and emails, every cruel and cutting scream ever heard in a Usenet chat room or a Breitbart comments thread.

He was the final shout into the abyss for the conservative movement, its last impotent sputter before Clinton beats them all by taking the presidential oath of office — at which point they will start demanding her impeachment. But let’s not get ahead of ourselves.

But before that final flameout, Trump went after Clinton with all the subtlety and tact of a Queens ironworker on a bar crawl. He pinned the Syria disaster on her, smirking that Bashar Assad had turned out to be “a lot tougher than she thought.” He sneered that Vladimir Putin “has no respect for her,” the subtext being that he will respect Donald J. Trump, the tough-talking alpha male.

He whined that the Democratic nominee should never have been even allowed to run for president because Hillary Clinton has committed “serious crimes,” a catechism of the right wing that will never die no matter how many investigations by how many law-enforcement agencies and congressional committees come to the opposite conclusion.

In some of the more surreal moments, he kept interrupting Clinton by booming, “wrong” into the microphone as if he was imitating Alec Baldwin imitating Donald Trump on “Saturday Night Live.” Maybe he’ll win that Emmy that Clinton mocked him for never having won for “The Apprentice.”

It was dominance politics, or at least a Trumpian effort at it. He is losing, and he is losing badly if the polls are to be believed, and he is losing badly to a woman, and that is something Donald Trump cannot abide. It is no wonder he wouldn’t say he will concede if (when) he loses the election, telling the moderator, Chris Wallace and the audience that “I will look at it at the time” — when presumably he will determine if there has been so much “fraud” and “rigging” that victory must have been stolen from him.

(Though truthfully, why would he admit he’ll concede? Have you seen the ratings this reality show he’s starring in is getting? Gotta keep the audience tuning in for three more weeks.)

So he attacked, and he belittled, and he descended into incoherence early and stayed there.

The final indignity came toward the end of the debate. Trump had spent almost 90 minutes belittling Clinton and her record, sneering about her alleged failures in every corner of her long career. Some criticisms were legitimate and some were ridiculous, but none of them were new. Having heard them all before, Clinton was well-prepared to brush them aside, letting Trump punch himself out in a froth of spittle and orange-faced anger.

Exhausted from ranting, having seen all his arrows bounce off armor hardened by 30 years of attacks by much more skilled opponents, Trump could only lean into his microphone and mutter, “Such a nasty woman.”

Such a nasty woman.

It was as if the Boston Pops had ended a marathon concert with the conductor letting out a weak belch. Four words that summed up the right-wing attitude toward Hillary Clinton far, far more succinctly than Ed Klein could ever dream of doing. That he interrupted an answer she was giving Wallace to throw in the insult was the chauvinist cherry on the misogyny sundae.

After that, it only took a few minutes for Clinton’s campaign to purchase the domain nastywomengetshitdone.com and set it to redirect to the homepage of her website. Someone in Brooklyn has a sense of humor, at least.

That is the sum of the Donald Trump campaign as we come into the final stretch: one long, exhausted, last-ditch, impotent anti-Clinton scream from the right. It will be back, though. Anger is an endlessly renewable resource.