To Trump, despotic foreign leaders are generally smarter than Clinton, and domestic leaders are just mean 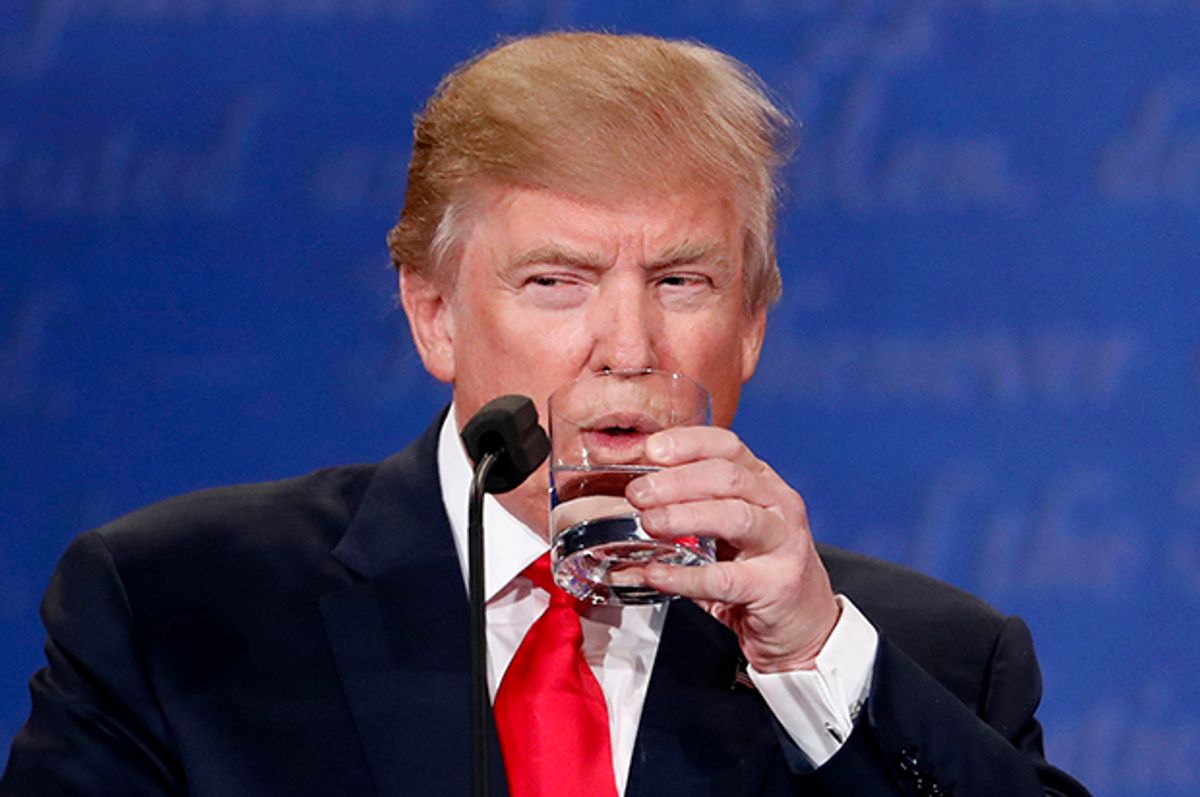 On the topic of WikiLeaks, the debate soon turned to Russian intelligence and Putin's opinions of who should be the president of the United States.

Quote : "I don’t know Putin. He said nice things about me. If we got along well, that would be good."

Trump repeated his claim that Putin is a super-deceptive genius when pushed by moderator Chris Wallace.

Quote: "Let me tell you, Putin has outsmarted her and [President Barack] Obama at every single step of the way. Whether it’s Syria, you name it. Missiles."

RELATED: The night Donald Trump undermined democracy: Where’s all this going, after the election? Not someplace good

Quote: "And a lot of this is because of Hillary Clinton, because what’s happened is, by fighting Assad, who turned out to be a lot tougher than she thought, and now she’s going to say, oh, he loves Assad, she’s — he’s just much tougher and much smarter than her and Obama."

Asked how he thinks the Constitution should be interpreted, Donald Trump said the Supreme Court Justice Ruth Bader Ginsburg was mean to his supporters.

Quote: "Justice Ginsburg made some very, very inappropriate statements toward me and toward a tremendous number of people, many, many millions of people that I represent. And she was forced to apologize. And apologize she did."

Moderator Chris Wallace dared mention the proposed Mexican border wall and the topic of immigration. Hillary Clinton said that Trump "choked" when he met with the president of Mexico, but failed to mention the wall — and then got into a Twitter war over who was going to pay for the wall. Then Donald Trump spoke.

Quote: "First of all, I had a very good meeting with the president of Mexico. Very nice man. We will be doing very much better with Mexico on trade deals. Believe me. The NAFTA deal signed by her husband is one of the worst deals ever made of any kind, signed by anybody. It’s a disaster."

On the Clinton Foundation, the Trump Foundation, and his tax returns, Trump claimed that 100 percent of the money from his charity went to charity. Wallace corrected him, stating that some of the charitable money was used in Trump's own lawsuits. Trump claimed it was charitable and for veterans. Clinton brought up the unreleased tax returns.

Trump criticized the military tactics in Mosul, Iraq, and blamed Clinton by invoking the emotional support of deceased war heroes.

Quote: "The element of surprise. Douglas MacArthur, George Patton spinning in their graves when they see the stupidity of our country. So we’re now fighting for Mosul, that we had. All she had to do was stay there, and now we’re going in to get it."

Trump cited supporters of Secretary Clinton who have said bad things about her to prove that she's unfit to be president after she said that Trump was "unfit."

Quote: "You know, WikiLeaks just actually came out — John Podesta said some horrible things about you, and, boy, was he right. He said some beauties"

RELATED: “Such a nasty woman”: Donald Trump and the last gasp of an angry id

Trump used Senator Sanders as a Clinton character reference after she called him "unfit to be president."

Quote: "And you know, Bernie Sanders, he said you have bad judgment. You do."

Donald Trump addressed the sexual assault allegations against him without dignifying the women with names.

Quote: "Well, first of all, those stories have been largely debunked. Those people — I don’t know those people. I have a feeling how they came. I believe it was [Secretary Clinton's] campaign that did it . . . I didn’t know any of these — I didn’t see these women. These women — the woman on the plane, the — I think they want either fame or her campaign did it. And I think it’s her campaign. Because what I saw what they did, which is a criminal act, by the way, where they’re telling people to go out and start fist-fights and start violence."