WATCH: "Morning Joe" hosts explode after Bill Kristol accuses them of "rewriting history" on their boosting of Donald Trump 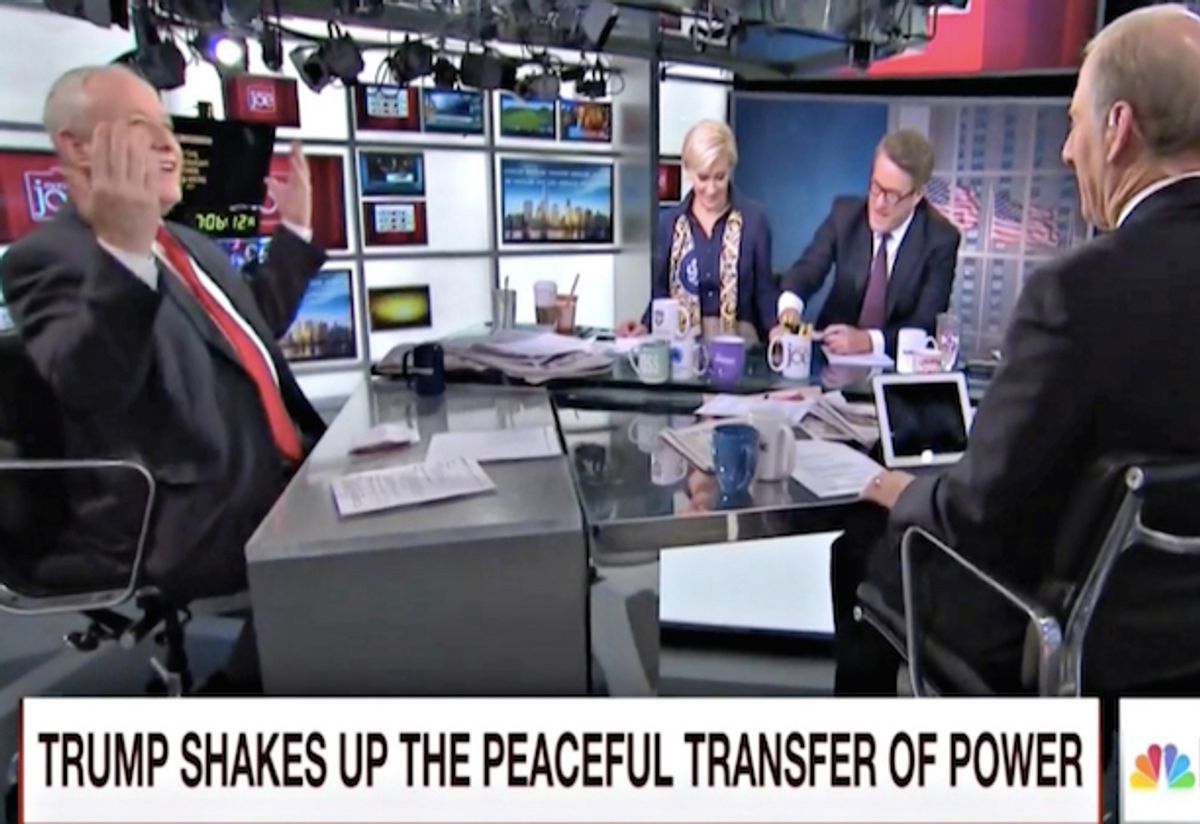 On Thursday's edition of MSNBC's "Morning Joe," co-hosts Joe Scarborough and Mika Brzezinski got into a heated exchange with conservative commentator Bill Kristol over their show's role in boosting the political neophyte during the GOP primary.

Trump is a “failed, fluke presidential candidate,” who should be “ignored on election night," The Weekly Standard founder and editor asserted following the third general election presidential debate, when the GOP nominee made the unprecedented move of preemptively refusing to accept the results of the election.

“Failed fluke?” Brzezinski incredulously asked Kristol. "Your people elected him and nominated him. That’s not a fluke. He beat like 16 people."

Replied Kristol, “He won it in a fluky way,” brushing off her comment. "I hope it was a fluke. Some Republicans have refused to support him and he’s going to lose the general election."

But when Brzezinski attempted to refocus Kristol on Republicans' need to “come clean on themselves” for nominating Trump, the man often dubbed “The Wrongest Man in Politics” let out all of his #NeverTrump frustration on the cable news show that gave Trump the biggest platform outside of Fox News.

“OK, fine!” Kristol lashed out with exasperation. “Does that make you feel better? You feel great because the Republican Party nominated a guy who’s really a bad guy as president? And you think it’s funny and amusing?” he asked.

“Oh, this show was really tough on Trump in late 2015 and early 2016,” Kristol mocked her and Scarborough, who as recently as last month reportedly visited Trump Tower to repair their damaged relationship with the real-estate mogul.

"We were," Scarborough insisted. "We were."

Kristol quipped back, “And you treated him that way when he called in, is that right?” He added, “A lot of people accommodated Donald Trump at different times. I’m not going to get into it,” Kristol then said.

"Well no, no, no, you just did," Scarborough shouted in return. “Please don’t come on my air and lie,” Scarborough told Kristol, pointing to times he claimed to have pressed Trump to defend himself. "I can’t even believe you’re doing this. I don’t know why you’re so bitter. You’re practically crying!"

Defending “Morning Joe,” Scarborough said the hosts had compared Trump’s rise to that of Adolf Hitler.

"Are you going to pretend that . . . if that's your way of rewriting history, that's fine with you guys," Kristol said as the interview devolved into a bitter back-and-forth battle.

"I am upset about this election. That's right, Joe, because you think it's amusing that Donald Trump is the nominee," Kristol sadly conceded in the end.

Watch the "Morning Joe" blowup below. It couldn't have happened to a nicer bunch in cable news:

Despite the blowup, however, Kristol and the hosts appeared to be cordial again by the end of the MSNBC morning show.

“I think we had fun,” Brzezinski said as she extended her hand to Kristol.