Donald Trump's history of violence: The truth about the Chicago rally and Trump's conspiratorial child brain

At Wednesday's debate, Trump's dangerously paranoid child brain lashed out in a series of lies 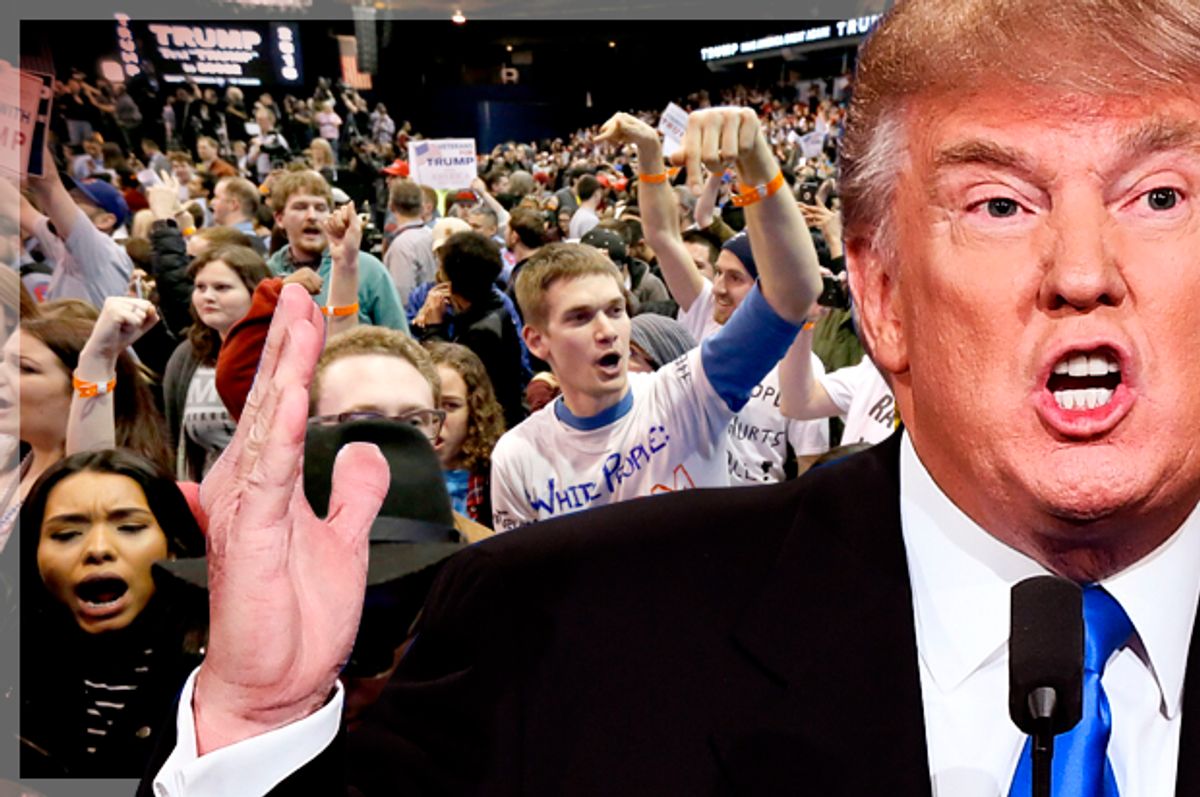 Donald Trump; protesters after a Donald Trump rally was canceled due to security concerns in Chicago. (Getty/Jewel Samad/AP/Charles Rex Arbogast/Photo montage by Salon)
--

In order to weaken and break a political system, one must defile and assault its sacred traditions and rules. In Wednesday night’s final presidential debate, Donald Trump made such a move. When asked by moderator Chris Wallace if he would accept the result of the election in November, Trump replied as follows:

What I've seen — what I've seen is so bad. First of all, the media is so dishonest and so corrupt, and the pile on is so amazing. The New York Times actually wrote an article about it, but they don't even care. It's so dishonest. And they've poisoned the mind of the voters.

What I'm saying is that I will tell you at the time. I'll keep you in suspense. OK?

This answer is almost without precedent in the history of American presidential politics. It is also further confirmation of what Trump’s behavior in the 2016 presidential race has made readily apparent and clear: He is a fascist and a demagogue.

Lies are one of his primary weapons. To that end, Trump is a Wormtongue who proves Vladimir Lenin’s quote, “A lie told often enough becomes the truth.”

As has been his habit, in Wednesday night’s presidential debate with Hillary Clinton, Trump denied supporting George W. Bush’s invasion of Iraq (he backed it), claimed that the sexual assault and harassment charges against him have been debunked (they have not), asserted that he never mocked a disabled news reporter (there is video of him doing so), said he has not sought the approval and friendship of Russian President Vladimir Putin (he does), said that Democratic rival Hillary Clinton wants to overturn the Second Amendment (she does not), maintained that he never said that Japan, Saudi Arabia and other countries should obtain nuclear weapons (he did) and alleged that Hillary Clinton’s tax plan will double the American people’s taxes (it will not).

As CNN commentator Van Jones observed, “He lied about the lies that he lied about.”

In his machine gun-like volley of lies during the final presidential debate with Clinton, Trump also suggested that she plotted violence against him at a rally he planned at the University of Illinois at Chicago. "She caused the violence," he said. Of course this is not true. Such a claim is a fiction manufactured by a discredited professional propagandist and agitprop provocateur from the right-wing hate site Breitbart. But this was a very revealing comment because it is an instance where personal observation and empirical reality confront the distorted and twisted world that Trump and too many other American conservatives inhabit.

I was at Trump’s “no-show” rally in Chicago. Waiting in line for hours, I personally heard his supporters mock and heckle protesters and use racial slurs and other insulting language towards Hispanics, Latinos, Muslims, gays and African-Americans. Inside the UIC Pavilion (where the rally was to take place) I personally watched protesters stand up in silent, stoic protest only to be threatened with violence and in some cases physically assaulted by Trump supporters. After Trump’s rally was canceled, I personally watched Donald Trump’s brownshirts start physical altercations with members of Black Lives Matter and other groups outside of the UIC Pavilion. I personally witnessed Trump’s supporters spitting at and throwing objects onto people from the roof of a nearby parking garage.

Trump has spent more than a year fomenting and encouraging violence against his political enemies and those Americans who disagree with his racism, bigotry, misogyny, and nativism. He then cries foul that a conspiracy against him is afoot.

The Republican candidate and “his people” are in no way “victims” of political violence: They confuse cause and effect.

His lies and other behavior are a signal to a broader phenomenon among American conservatives at present. Trump has successfully merged the conspiratorial and the childish.

The conspiratorial mind manufactures its own “truth." Contrary facts are “biased” or “unfair." If there is an absence of evidence for Trump’s claims, he simply proceeds with his own assumptions and conclusions as if they were ironclad and irrefutable. Examples are also robbed of context in an effort to force them to fit a predetermined narrative that cannot be changed by new information or knowledge.

Childish politics are unable to engage in substantive discussions where evidence and reason are prefaced over emotions. Trump, who is stuck in a child-like ego state and perpetual adolescence, prefaces responses about the Supreme Court in terms of personal insult and refuses to take responsibility for his behavior. (When confronted with accusations about sexual assault, he instead pivots to ISIS). Trump the man-child is also a master of the schoolyard insult and bullying behavior whereby he hurls back criticism like a boomerang while yelling, “Sure I am! But what are you!”

In all, Trump’s performance during the third debate — and his ascendance more generally — is the logical end result of epistemic closure and the alternate reality created by Fox News and the right-wing news disinformation entertainment machine. As a complement to that world, movement conservatism functions as a type of political religion that is immune from empirical reality and so heretics are punished most harshly. Trump is like a man who has stuck his head inside of a drum and who is beating it from both inside and out. He and other conservatives are used to the noise, thus made unable to orient themselves properly and now think the cacophony is music.

Most important, Trump is a political arsonist.

When Trump told Chris Wallace that he would not accept the outcome of the election in November, this was the equivalent of committing an act of political martyrdom whereby Trump set himself on fire, jumped off a cliff and gave anyone who was looking two middle fingers as he plummeted to his death.

Patriots and sensible Americans were aghast at this act; Trump’s minions were titillated and inspired.

Despite the latter’s joy and defiant pleasure, this is not a joke.

There is something foul in Trump country. It has been fermenting for some time. In a recent feature, The Guardian explored the rise of militia movement and the American right-wing in the country’s rural communities and made the following disturbing observation:

Elsewhere, according to [the Rural Organizing Project's Jessica] Campbell, Patriot sympathizers are moving into communities in order to tip the electoral balance towards far-right candidates. She fears this trend will continue long after a Trump defeat. “I’m seeing a lot of paramilitary groups recruiting on the basis of a likely Hillary Clinton win,” she said.

When Trump started talking about rigged elections and how a Clinton win would show that democracy was broken, “it was just amazing seeing how that resonated with people — a sense of democracy being broken, feeling like the candidates don’t represent them or anything they want to see happen in this country,” she added.

Campbell would vastly prefer that Clinton wins but acknowledges that it may be like it was “after Obama won, where there was a huge growth in Patriot movement organizing. I’m worried that we are going to see the same thing.” The alleged bomb plot by militia members in Kansas, timed for the day after the election, shows the way in which those fears might be borne out.

The vast majority of his minions will return to their miserable lives and wallow in racism and bigotry until the Republican Party or a different right-wing organization births another monster like Trump. He or she will likely be more refined and polite, a greater threat, someone in the style of GOP vice presidential nominee Mike Pence, having learned lessons from Trump’s 2016 campaign.

But there are likely more than a few men and women who will heed Trump’s call to resistance and complaints about “stolen elections.” They will be moved to act — at least in their twisted minds — to right things by striking a blow for “resistance” and “freedom.”

Donald Trump, the Republican Party that nominated him, the human deplorables who  support him and a lazy, complicit mainstream corporate American news media that has given him $3 billion worth of free airtime in which to spout his poison all bear responsibility for the violence that he will likely unleash on Election Day and thereafter.

We the people may be made to suffer because of one man’s flirtation with fascism and personal aggrandizement.

Will there be a Donald Trump-inspired Timothy McVeigh type in 2016? I hope not. But I would not be surprised if Trump’s toxic political campaign let fall such rotten and despoiled fruit.